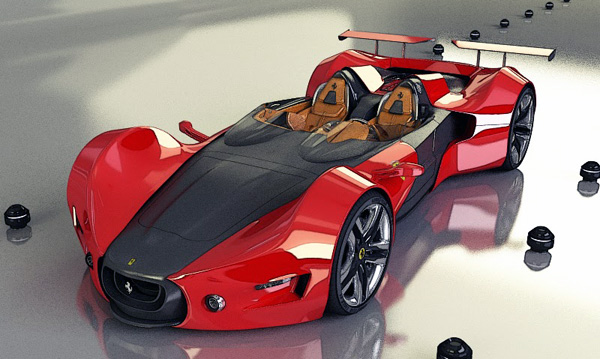 It’s just breathtaking to behold, you could sit and look at it all day, taking in its sexy lines and curvy feminine hourglass shape. The front section of the Ferrari Celeritas sprouts out to a point and features lustrous front wheel arch humps and a long flat bonnet.

Down the middle, there’s an almost fuselage-style mid-section which is drawn in to provide a slim waist housing the cockpit and two seats. At the back it spreads out once again to match the front, presenting two large buttress humps which sink into the rear axle. The rear is also designed to accommodate the engine

Using this type of hourglass shape gives off the impression of an open-wheel race car which is where the early F1 inspiration was obviously drawn from. Aldo Schurmann hasn’t specified a particular engine setup for the Ferrari Celeritas, but as you can see, there’s a V12 unit of some description resting nicely in front of the rear axle. 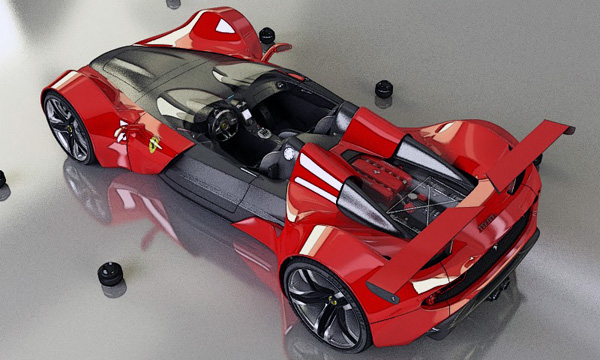 Although the Ferrari Celeritas design concept does appear to be inspired by race car, the Celeritas is envisaged as a super-exotica road car with a clear performance-oriented pedigree. There are signs of road-legal-abiding features such as lights and wing mirrors.

There’s subtle spotlight-style headlights embedded into the front with a neat string of LEDs incorporated into the corner air dams, while at the back there’s another set of LEDs stemming from circular taillights. The Celeritas also features a dual rear wing set which moves independently to offer optimum high-speed stability.

Of course, being a concept study, there are no plans for the Ferrari Celeritas to go into production any time soon. It’s a shame though as this is one piece of art that needs to be shared out on the streets. What do you think of it?