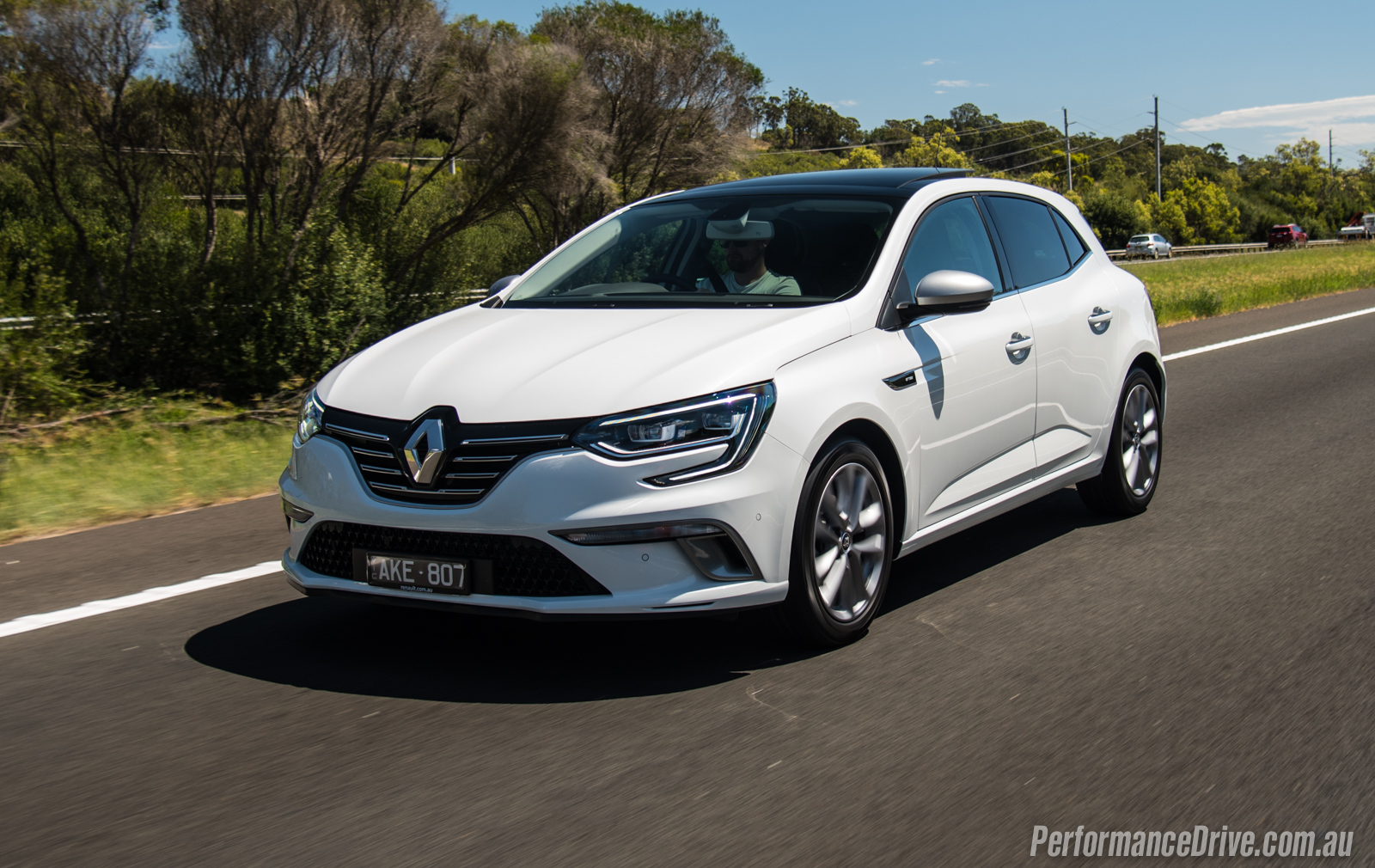 Despite the ongoing prevalance of SUVs and dual-cab pickup trucks/utes, one segment of passenger cars is holding steady and has replaced the large Aussie sedan to become the default segment for buyers. 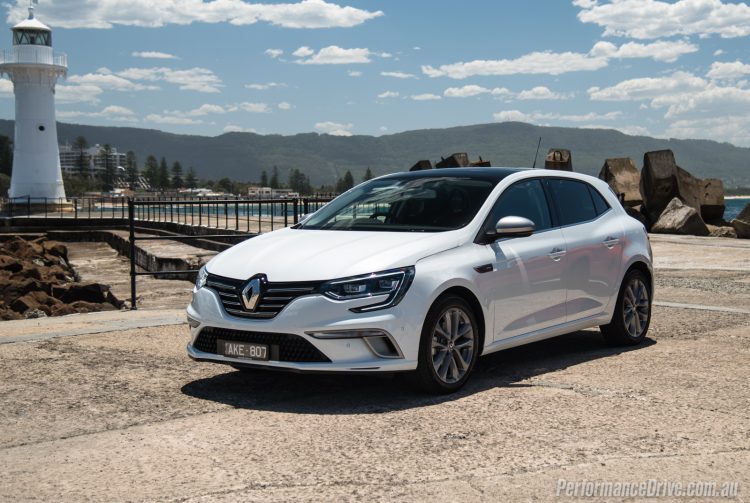 The C-segment small car category could be the most fiercely fought of them all, with over 15 different models vying for your dollar. Each has to carve out it’s own unique identity to stand out and in the case of the 2017 Renault Megane GT-Line, it’s avant-garde French design and clever tech.

The $32,490 GT-Line is the third tier model in the range, which opens with the $22,490 Life and closes with the $44,990 GT 220 Wagon. A Renault Sport Megane is expected next year. The current version of that car is an enthusiast favourite, so we hope Renault has distilled some of that magic into the cooking models. 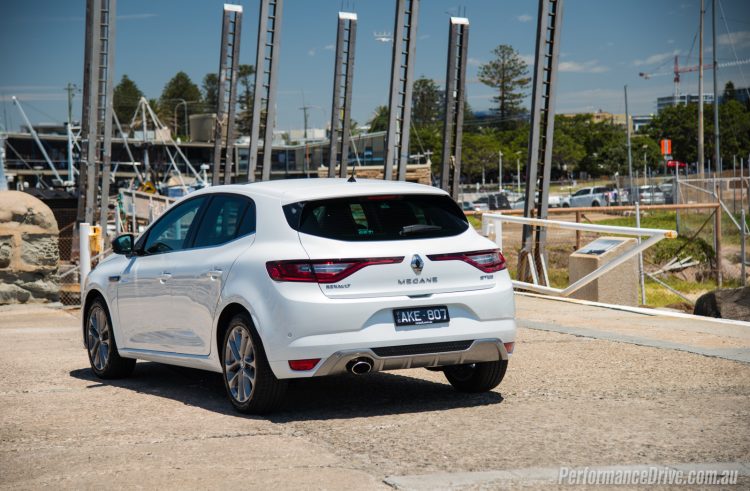 All Meganes bar the GT hatch and GT 220 wagon come with a 1.2-litre turbo-petrol engine putting out 97kW and 205Nm. A six-speed manual is available on the base Life and GT 220, but everything else is a strictly seven-speed dual-clutch auto affair. Strangely, given this car’s market positioning, there are no paddle shifters.

Looks-wise, the latest Megane is very bold and confident, with a concept-car like grille and LED light detailing. The rear end has a dramatic taillight shape, which extends into the centre of the boot. To our eyes, it is a very attractive looking car, thus really standing out in this segment..

The body feels quite large and wide by class standards and this mostly translates to decent accommodation. It is 4359mm long, 1814mm wide, 1438mm high and sits on a 2670mm wheelbase. Boot space is 434L with the rear seats up and 1247L with them folded. 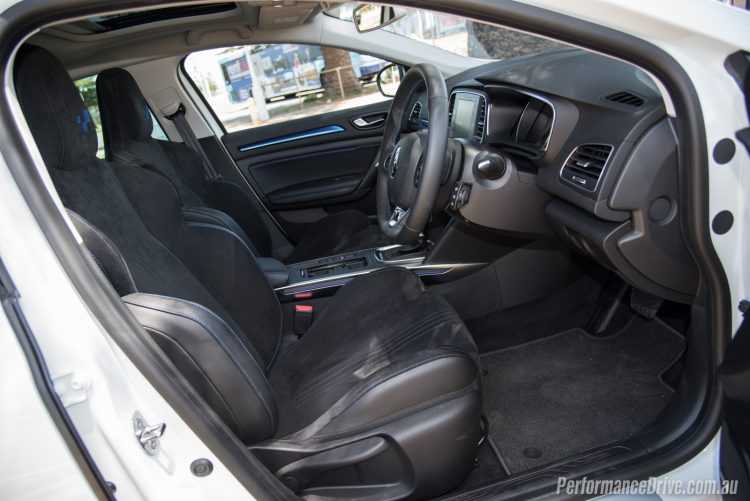 The GT-Line comes with bolstered front seats trimmed in thick suede, which seems to give the impression of less room than there is. They can also make entering and exiting slightly awkward if you’re a bit larger. The Life and Zen have more conventional pews.

Once ensconced in those chunky buckets, you sit before a portrait-style tablet screen reminiscent of the Tesla Model S. Directly in front of you is a digital instrument panel, which is configurable and, in our opinion, best-in-class for legibility and distraction-free information. If only all cars had this clarity and functionality for their instrument clusters.

Adding to this is Renault’s Multi-Sense with five switchable driving modes, with corresponding colours emanating from LEDs; red, orange, blue, green and purple. Engine and transmission mapping, steering weight and instrument display can also be adjusted individually in ‘Perso’ mode. This is a great feature that really adds to the premium and sporty ambience of the vehicle. The large sunroof is also very welcome, as are the auto up and down windows. 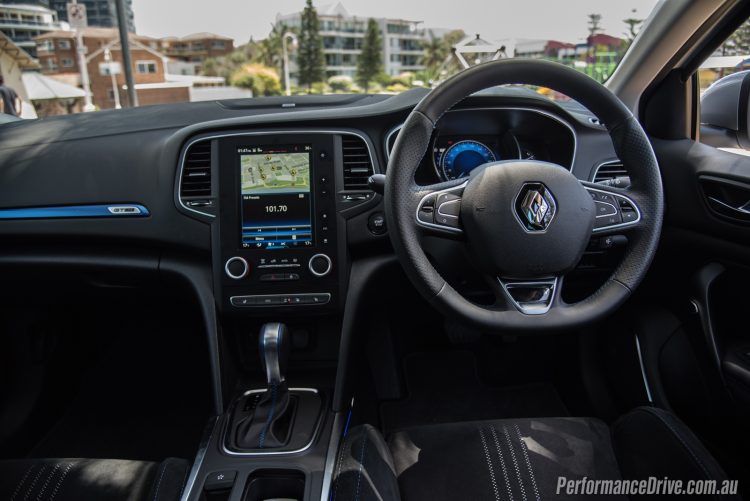 From here, it starts to go downhill. The R-LINK 2 operating system on the tablet display is not intuitive to use. Alongside it are capacitive touch buttons for power and volume. Their surface is prone to oily finger marks and it is not as easy to use as a volume knob. Interestingly, the Life and Zen have a smaller touch-screen and volume knobs. We suspect they would be more user-friendly. The eight-speaker Bose stereo is quite decent, but there is no smartphone mirroring.

Operation of the climate control is also annoying, since it takes over the whole screen, meaning you have to navigate back to entertainment or maps, causing unnecessary distraction. Unlike the Mazda3 Maxx, there is no traffic or alternate route calculation in the navigation system, so if you encounter unexpected traffic, c’est la vie. 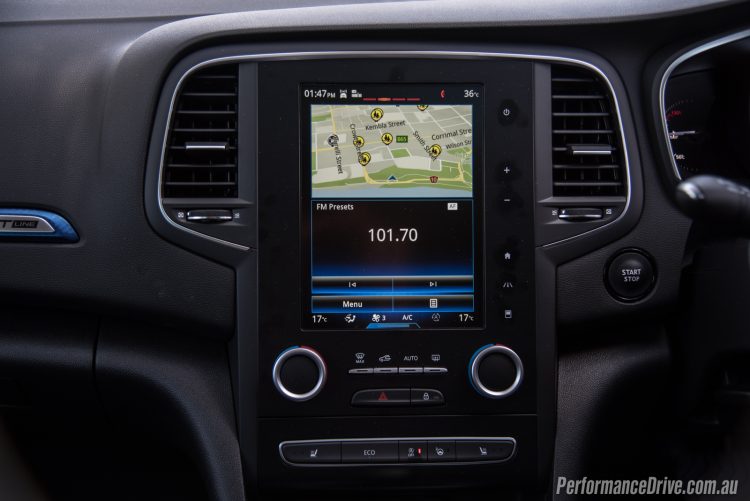 Other ergonomic foibles include a satellite pod for audio controls obscured by the steering wheel, and a cruise control switch oddly placed down in the centre console. We suspect these were an attempt to add quirky French charm, but it seems contrived, as if the company shipped it out with a cigarette in its grille and fresh baguettes in its trunk.

Lastly, although there is a premium air throughout the cabin, many touch points are nasty hard plastic. All plastic surfaces below the dash are scratchy, while the starter button feels 1980s-era Korean. A small detail, but one that should not have been overlooked in our opinion.

One way it redeems itself is with the proximity key card which locks the car itself as you walk away. Very nifty, but that card is a bit clumsy and doesn’t have a keyring hole. 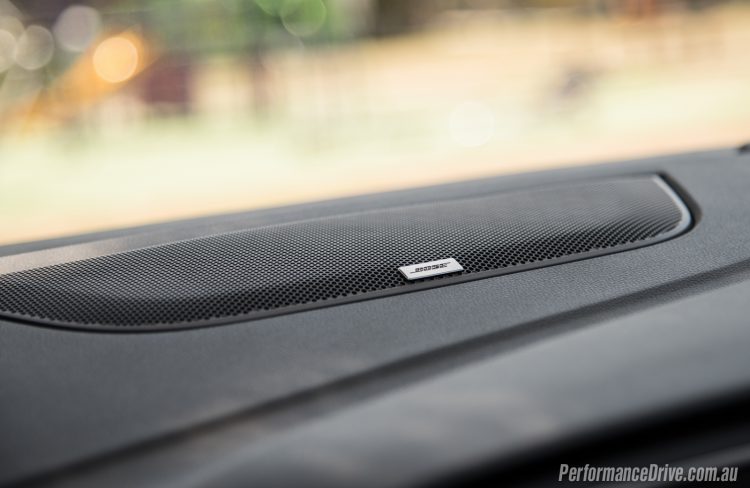 In terms of rigidity and refinement, the Megane’s CMF-CD platform shared with Nissan is top notch and a solid starting point. Wind noise is well contained, as is engine noise, unless you select ‘Sport’ with the Multi-Sense controller, where some engine noise is diverted to the cabin via speakers. It can briskly gain pace in point-to-point traffic, but doesn’t throw you back in your seat. Adequate is the right word here, with 0-100km/ h coming up in 9.79 seconds with our timing.

Ride leans towards the firm side, but the stiff body keeps all but the most violent potholes from entering the cabin. As you would expect from a European car (built in Spain), high-speed stability is exceptional, with the car proving a very competent and comfortable tourer. 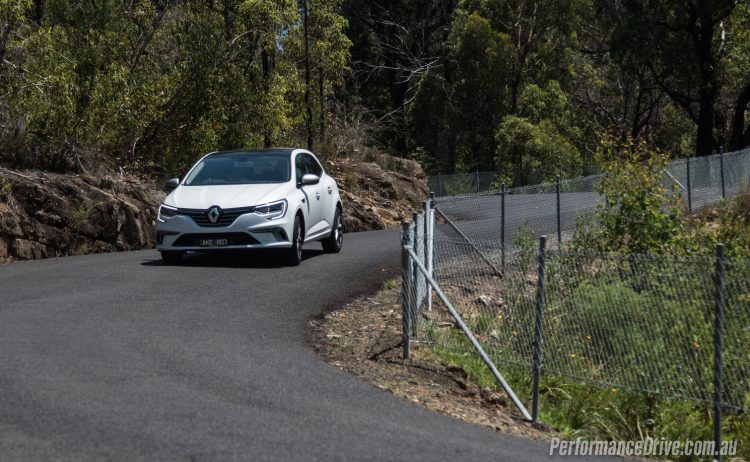 For cornering duties, the GT-Line acquits itself rather well, with high grip levels from the standard Michelins, but we would stop short of calling it absolute best-in-class. It’s fun and engaging and that elevates it above most mainstream hatches, but lacks the agility and feedback to deliver real thrills. Fun can be had but turn-in is not quite as eager as Mazda3, Astra or Civic, for example. In Sport mode the steering weighs up but doesn’t become more communicative.

Fuel consumption is quoted officially at 5.6L/100km, which translated to a 6.8L/100km real world average in our hands. Not bad at all.

The dual-clutch gearbox makes the most of the small engine and is refreshing in a sea of droney CVTs. It can be prone to some rollback and isn’t as quick to respond as some rivals (even Hyundai). As we already mentioned, paddle shifters are a glaring omission in a car with the GT-Line’s mission statement and price point. 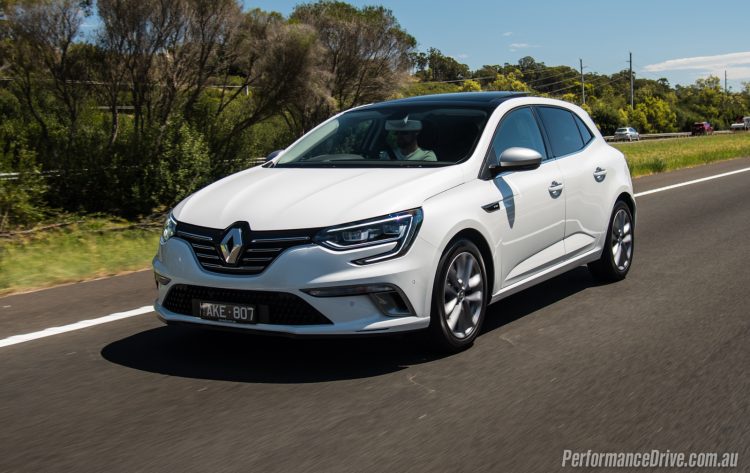 The Renault Megane GT-Line is a very interesting alternative in a very crowded playground. Overall, it looks distinctive, confident and upmarket and has the technology to command your attention, with the cabin space and practicality to make it a liveable proposition. Attention to detail like the instrument layout, configurable LEDs and switchable driving modes are well-executed surprise-and-delight features.

Equally, operating the R-LINK2 system is distracting and infuriating; the placement of switches and buttons is just ridiculous and it is priced against more powerful cars like the 150kW Hyundai Elantra SR, 138kW Mazda 3 SP25 and 147kW Holden Astra RS-V. The $38,490 GT has a lot more going for it but at 150kW is getting into Focus ST and Golf GTI territory.

Summarily, if you want an upmarket small car with excellent touring ability, great mood lighting, easy to read instruments and some sporting flair, the GT-Line is certainly worth a look. If outright power and driving thrills are your priority or you must have a user-friendly infotainment system, best look elsewhere.