Over the years we’ve seen the SS Commodore develop from a humble local offering into a world-class performance outfit. Sadly, its days are numbered.

General Motors made the decision last December to wrap up all local manufacturing by 2017, effectively turning Holden into an import-only car company.

If you’re in the market for an Australian-made V8 performance car, the SS Commodore is one of only two options available.

We recently had the pleasure of testing both the SS V and SS V Redline models for a week a piece. Both cars share the same six-speed manual transmission and E85-compatible 270kW/530Nm 6.0-litre V8 as standard. 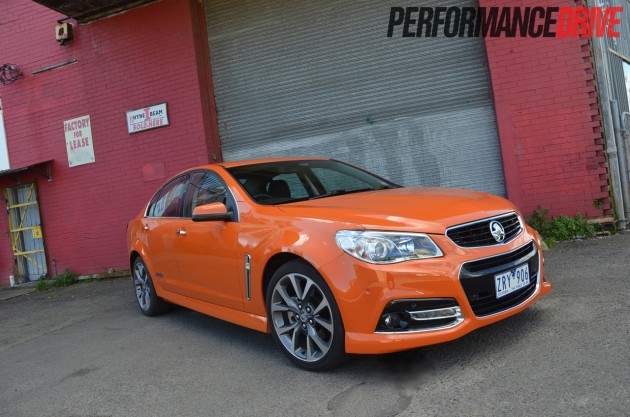 For some people, value for money is everything. And the very latest bunch of VF V8s have seen prices slashed by as much as $9300 over the outgoing VE models.

So, what do you get in the SS V Redline that you don’t in a regular SS V? This;

The VF’s interior is a tidy outfit offering high levels of comfort and functionality. The leather seats are lounge-like with loads of support, and there’s plenty of room for five adults making all VF models great for touring or families on the move.

Helping the driver get acquainted with the car is a snug driving position and a thick leather steering wheel that falls right into your lap. Gone is the ugly centre console handbrake, now replaced with an electric park brake. The power window switches also have a new home on the driver’s door. 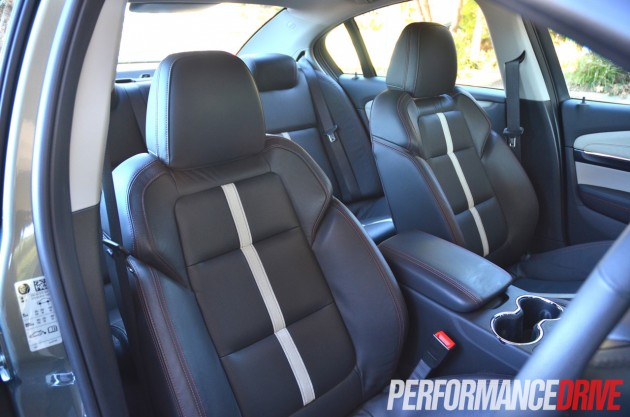 The trim is leaps and bounds better than anything we’ve seen from a Holden Commodore before, however, the use of fake carbon fibre and some of the stitchwork on the seats does remind us things have to be made to a price. The leather strip on the dash is also questionable – what happens when it gets grubby?

All SS models benefit from Holden’s new MyLink infotainment eight-inch LCD touch-screen. Sitting smack-bang in the middle of the dash, the new system pools most of the car’s functions into one unit. The menu buttons are easy to read, and the widgets are simple to use. The system supports Bluetooth, USB/MP3, Siri Eyes, and aux-cable input. It also incorporates Pandora and Stitcher application-based music players.

While the SS V Redline comes with a sunroof and a punchy nine-speaker Bose audio system as standard, SS V buyers will have to fork out $2490 to for the duo. Both the SS V and Redline model do benefit from satellite navigation as standard, though – a $750 option on the base model SS. 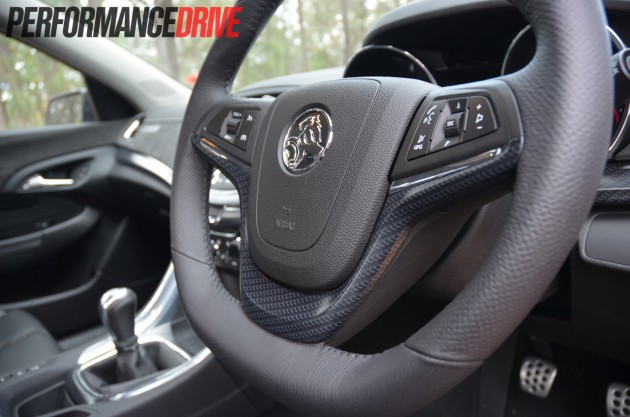 A standout feature new to the VF is the auto park-assist system. It is more than helpful in tight city situations, leaving only the throttle and gear selection up to the driver while the system uses radar technology to electronically steer the car into place.

The SS V and SS V Redline might share the same engine and transmission, however, they behave differently out on the road. The Redline’s FE3 suspension has a noticeably firmer ride than the SS V’s more-supple, yet sporty FE2 setup.

The SS V’s softer FE2 suspension and more-relaxed steering tune provide the driver with a good sense of what the car is up to when pushed, but the ride is far more easy-going and livable for day-to-day duties. The SS V is a good mix of performance and comfort.

The Redline assures you on every bump that it’s a more performance-focused variant. Its uprated suspension components allow it to be punted faster through corners with more confidence, sitting flatter, making good use of its fatter rear hoops to grip and go. The Redline feels more direct with less body roll, but does so at the sacrifice of some ride comfort. 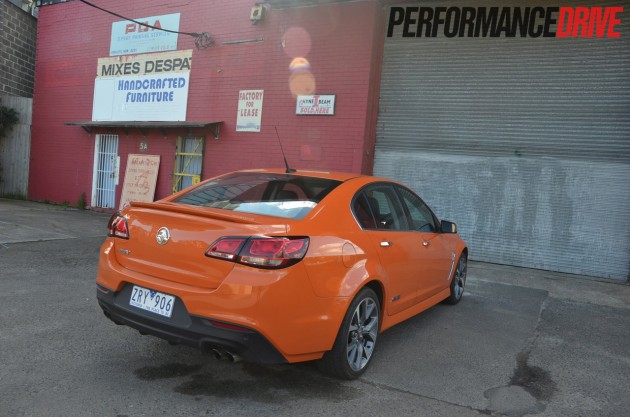 The Redline’s ‘sportier’ steering tune – which becomes even more responsive in Competitive Mode –  also feels more communicative, making it easier to find the balance of the car. The latest VF V8’s are still nose-heavy despite shedding some kilos, but overall the VF chassis is more talkative and chuckable than the VE.

One feature performance nuts will appreciate is launch control (six-speed manual models only). While it could be forgiven as a bit of a gimmick, it works effectively. Select Competitive Mode, slot the shifter into first gear, engage the clutch, press the throttle to the floor twice and hold it down the second time, wait until the revs rest at around 4000rpm, drop the clutch, and away you go (see SS V Redline video below for our on-track demonstration).

Naturally, the Redline’s Brembo brakes offer superior pedal feel to the SS V’s regular Holden items, giving fade-resistant braking during our road test. The SS V’s brakes certainly feel more than up to the task, but the Redline’s extra bite and better pedal feel give you more confidence when trying to wipe off speed. 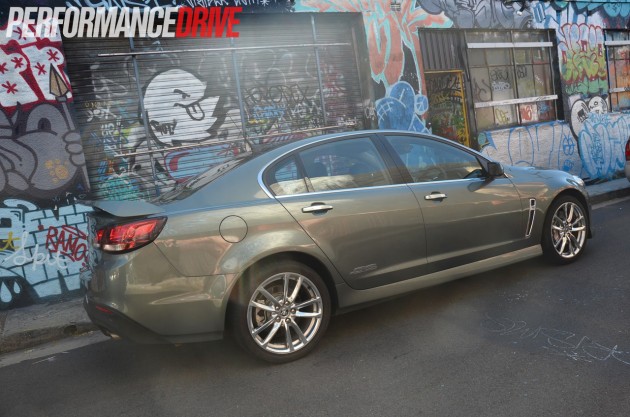 The Redline’s wider rear tyres (275-wide versus the SS V’s 245-wide) help it to grip up out of corners and launch better than the SS V. But is more traction something punters want? Both cars are eager to set the rear tyres alight if provoked, so don’t stress.

Rowing through the meaty-feeling six-speed gearbox provides great thrills in both cars. The clutch’s long throw and chunky gear shift reminds you of the engine’s large and beefy displacement. The sound as the engine spins the tacho’ needle also becomes quite addictive – flat out in any gear plays a tune that’s good enough to turn a smile into a cheeky grin. It could be a bit louder on the outside though.

Fuel consumption for both cars was one litre apart during our test; the SS V averaged 13.1L/100km, and the Redline a touch more at 14.1L/100km. We have no doubt you can get these figures lower, it just depends how you treat them. If you floor it everywhere they’re obviously going to drink. Officially the SS V uses an average of 11.5L/100km with the Redline using 11.8L/100km.

Heading out in the SS V Redline for some full-throttle laps at Wakefield Park Raceway thanks to one of GP EXEC‘s awesome track days didn’t disappoint. The car’s FE3 suspension tune helps it to keep a fast, tight line, using all of the available 270kW escaping corners and down the straights before jumping on the trusty Brembos. 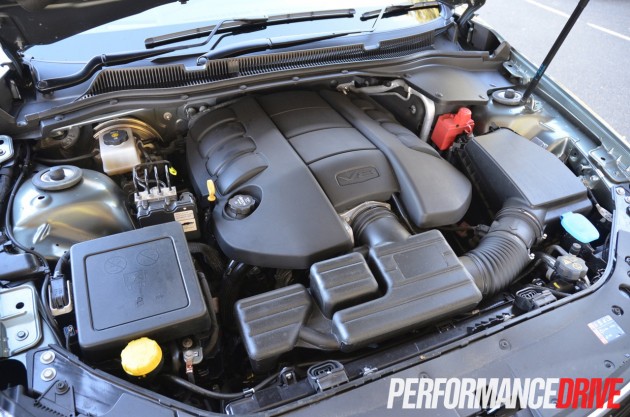 The track was a top spot to properly sample ‘Competitive Mode’, which revealed a system that gives the driver a chance to explore the car’s abilities without interruption or fierce intrusion of the traction control, with the comfort of knowing there’s still systems in place to help you avoid major trouble.

The Redline is easy to drive hard, with very little of the usual sloppy ‘boat-like’ handling we’ve come to know from Commodores over the years. If we had to be critical about one thing it’s that the engine sure does love to drink when you leave your foot planted. And by drink we mean lots. But it was lots of fun so we guess it’s forgiven.

The Redline behaves much more like a cut-price HSV than a regular Holden SS, or SS V. We’d have to say the Redline model is worth the extra money if you plan on driving it hard and attending track days. If you’re after a sporty V8 commuter you won’t miss the Redline’s firmer ride, or higher price tag, so perhaps go with the SS V.

If you plan on using the car as a platform for extensive modifications such as lowering the ride height and extracting more power, the $6000 saving on the SS V over the Redline might just come in handy. 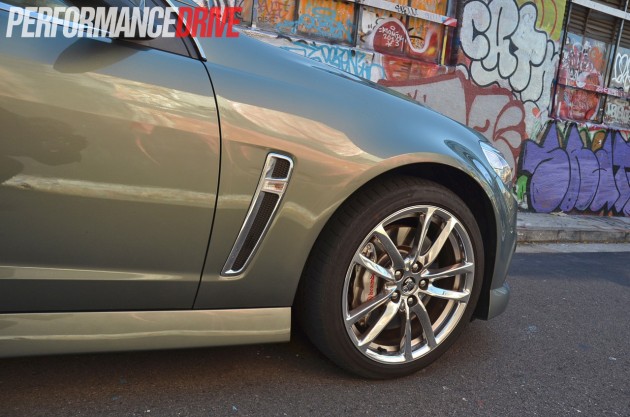