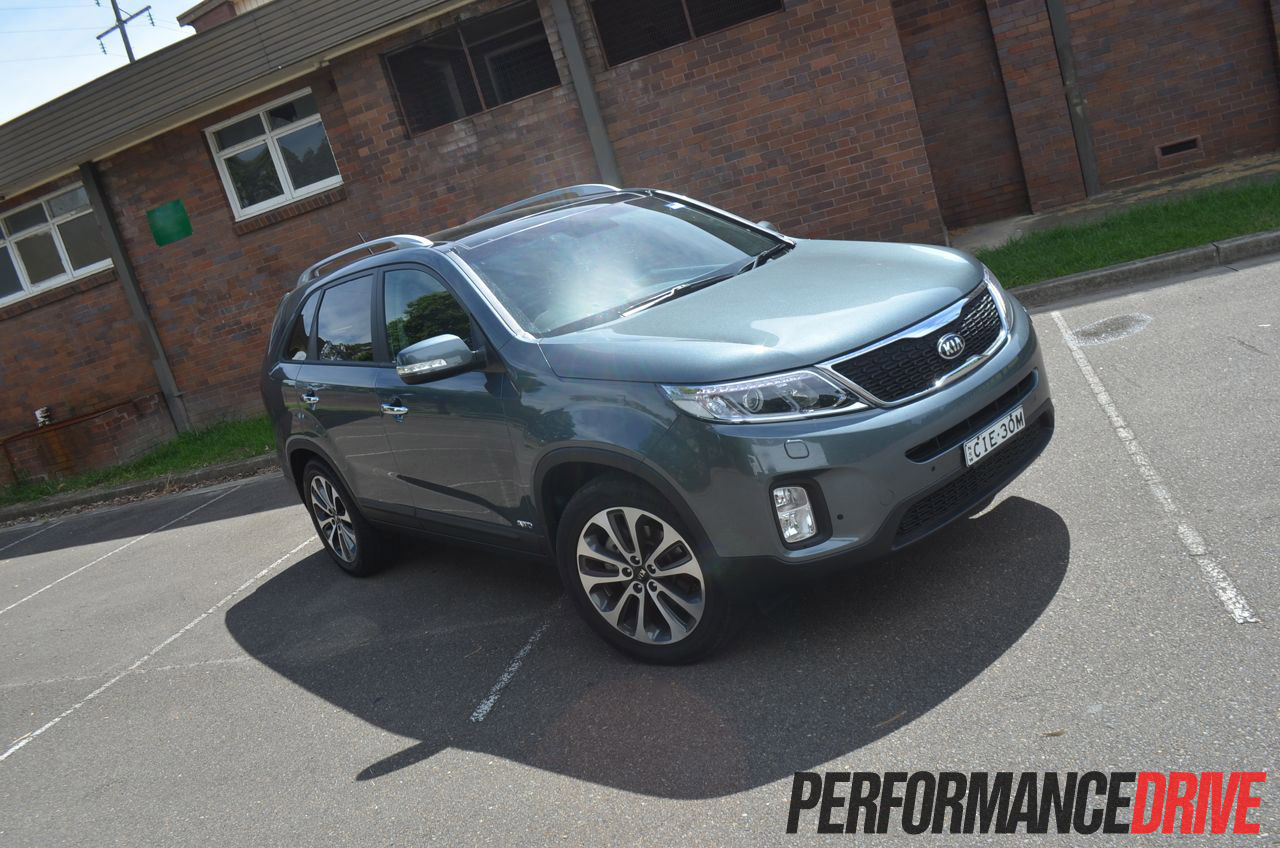 In the world of SUVs, the 2013 Kia Sorento Platinum offers great value for people who want seven seats, a touch of luxury, good driving dynamics, and efficient power, all rolled into one. 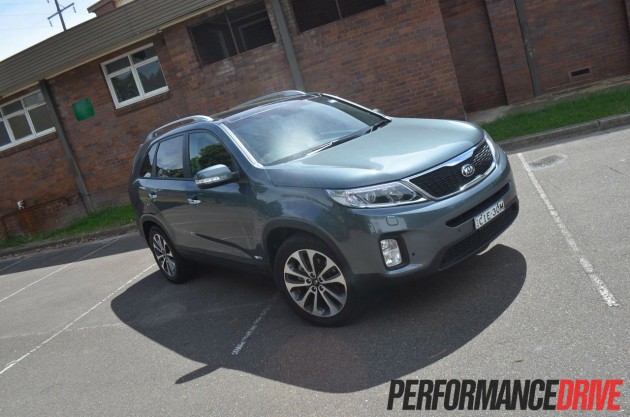 The Sorento has been in the Kia stable for some years now, and the latest 2013 model is definitely the most improved.

The 2013 model has been significantly revised, in fact, it features an all-new platform, with tweaked front and rear styling and a slightly revised interior. And for the first time, the Sorento is sharing platforms with another vehicle; the Hyundai Santa Fe.

Depending on which model you go for, there’s a 2.2-litre turbo-diesel on offer that produces 145kW and 436Nm (manual variant is rated at 421Nm), and a 3.5-litre petrol V6 that puts out 204kW and 335Nm. Petrol-powered Sorento models are front-wheel drive only, with diesel models featuring an all-wheel drive layout. The only manual transmission variant in the line up is the Sorento Si diesel, with the rest using a six-speed automatic.

The Sorento Si starts from $37,490 for the automatic front-wheel drive petrol V6 model, and from $38,990 if you go for the manual all-wheel drive diesel (add $2000 for automatic transmission).

Sitting at the top of the tree is the Sorento Platinum (as tested), which is priced from $50,390 with the diesel engine and six-speed automatic. 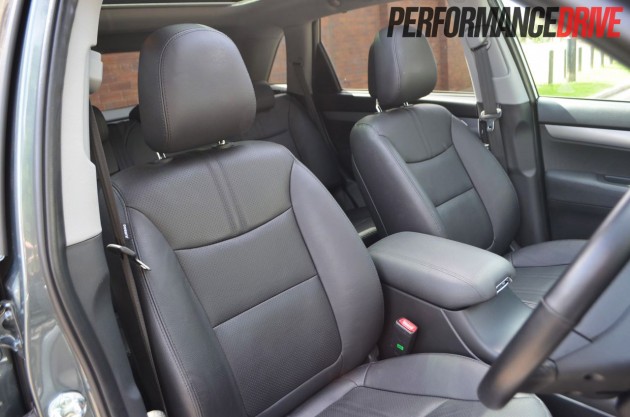 Large seven-seat SUVs, like the Kia Sorento, are often purchased because of the need for space, flexibility, and seating capacity; the Sorento offers all three in spades.

Open up any of the doors and you’re greeted with seven leather-bound seats, and a spacious cabin. The 2013 model features 30mm more leg room in the second row, and 9mm in the third row.

Up front the driver and passenger are treated to heated and cooled seats, as well as dual-zone climate control. There’s also air vents for both second and third row passengers.

If all three rows are laid down flat, there’s 2052 litres of cargo space on offer. This turns into 1047 litres with the second row in place, and just 258 if the third is propped up.

Privacy glass is standard on the second and third rows, and on the tailgate, reducing UV rays by up to 96 per cent. The Platinum model also features a panoramic glass roof with a sun blind that stretches from front to back.

The Platinum model includes a seven-inch dash display that is used to control the factory navigation system, SUNA traffic notifications, and all stereo functions for the CD player, AM/FM radio, USB, Bluetooth, and aux-in. Sound quality of the stereo will definitely keep heads bopping.

From the outside, the Kia Sorento looks much like the 2012 model, albeit it with new set of lights front and rear, and revised bumper bars. However, as we stated, underneath it’s a completely new platform.

As far as looks go, it’s not the prettiest SUV on the market, especially when parked next to Hyundai’s new Santa Fe (quite the stunner). That said, there’s something about the subtle appearance of the Sorento. It’s honest, modern, and straightforward. It’s not trying to be ‘too’ stylish. The new LED rear lights and revamped headlights do somewhat modernise its overall look.

It kind of makes you wonder why Kia didn’t follow in the Santa Fe’s footsteps and completely revamp the external design given it went to the effort of placing a new set of legs under it. Talking about legs, Kia has scrapped the old 18-inch alloy wheels for the Platinum and gone with a neat set of 19-inch alloy wheels that look at home on the SUV.

The 2013 Sorento receives a five-star ANCAP rating, scoring 33.21 out of 37 in recent tests. No less than six airbags are fitted, as well as active front headrests, and side intrusion beams. 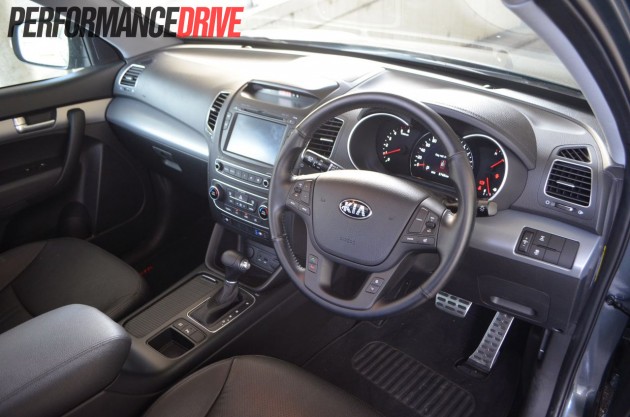 The 2013 Sorento has the driver in mind. The new platform rides well and steers with confidence. The all-wheel drive system helps to keep things sure-footed as you tip from corner to corner.

The large SUV’s felt right at home on our test roads, soaking up bumps and lumps with ease; the new platform is a lot more ‘chuckable’ and responsive to driver input. The Kia features MacPherson struts up front and a multi-link setup at the rear. The new model also features suspension changes such as a larger sub-frame, and longer trailing arms.

The new Sorento comes with Kia’s new FlexSteer system; a feature allowing the driver to change through three steering weight settings (Normal, Sport, and Comfort). The electric steering rack, like nearly all electric steering racks, does lack the feel of a hydraulic unit, however, having the ability to adjust the weight does help.

The gutsy 2.2-litre turbo diesel is more than willing to fire up and change pace from cruising to active driving without a second thought, as is the six-speed automatic, albeit a teeny bit laggy in its kick-down action. With 436Nm on offer, there’s very few hills that upset the Kia’s go-forward ability despite its 1960kg kerb weight.

If you’re really into owning a soft-roader that has decent offroad abilities, the Sorento isn’t the first vehicle you should be looking at. For starters, the ground clearance is a lowly 184mm, which means it does like to scrub its belly when climbing over mounds and so on.

Grip levels from the Sorento’s AWD system off road are good, but not fantastic. It has a tendency to understeer should you try and hook it around a dusty bend. But if you drive it in a more gentle manner, it remains on its best behaviour and proceeds confidently. The suspension does a commendable job of soaking up bumps and rocks, too.

As far as taking it ‘bush’, the Sorento is a more of a road car with the ability to easily tackle an unsealed corrugated road, or hop up the gutter to park on the grass when all the spots are taken at your local gym. Just don’t try and climb any serious rockery. 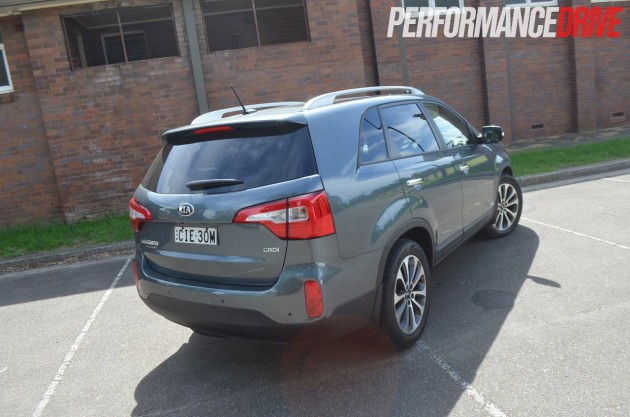 The Kia Sorento Platinum offers the versatility of a seven-seat SUV along with a nice platter of luxuries, and the best part is, you don’t have to pay through the nose for it like you do with some of the Euro rivals.

While it isn’t a serious off road vehicle, it is a fantastic road vehicle – partly thanks to the new underpinnings – that will deliver and commit to family duties, all while being a little bit suave.

CONS:
– Some creaks and rattles from the interior
– Some elements of the interior look a little too plastic/dated
– Totally new platform, but uses the same styling
– Electric steering lacks proper feel 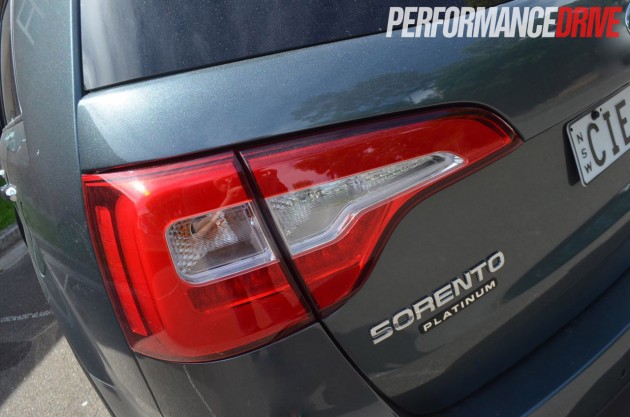