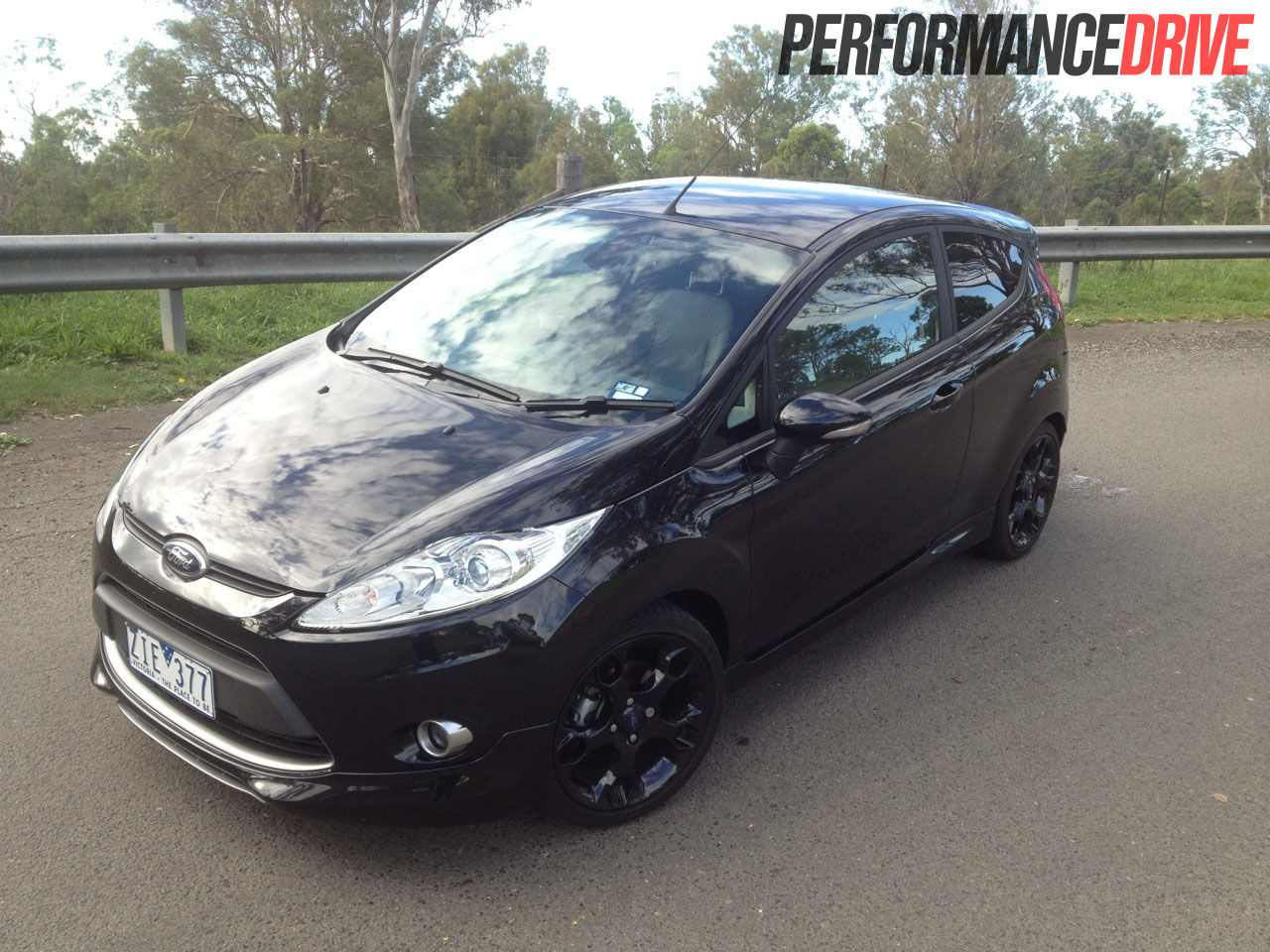 The 2013 Ford Fiesta Metal surprises for its size. Many might assume it’s just a prettied-up little four-banger, but underneath it features a host of moderate performance tweaks – including a power boost – which bring the Fiesta to a new level. 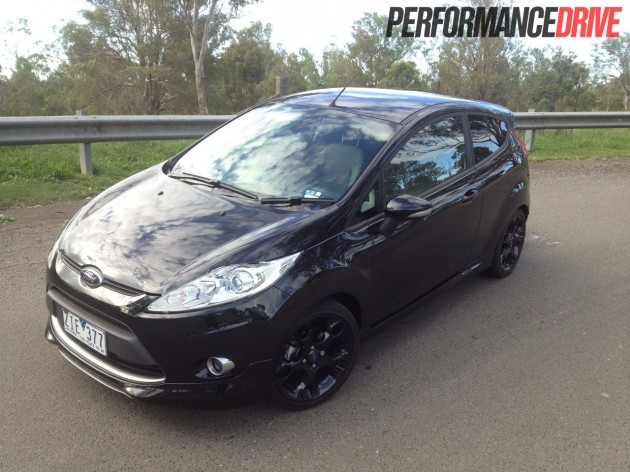 The Ford Fiesta Metal is the blue oval brand’s hottest small hatch currently on sale – at least until the hot new Fiesta ST arrives in the next few months. For now, it is without question the fastest Fiesta you can buy at the moment.

The Metal is limited to just 250 examples here in Australia, and unlike other Fiesta models, the Metal comes straight from Ford’s Cologne plant in Germany rather than Ford’s Thailand plant.

The black-on-black supermini is priced from $22,990, and is available with a five-speed manual and in two-door form only. 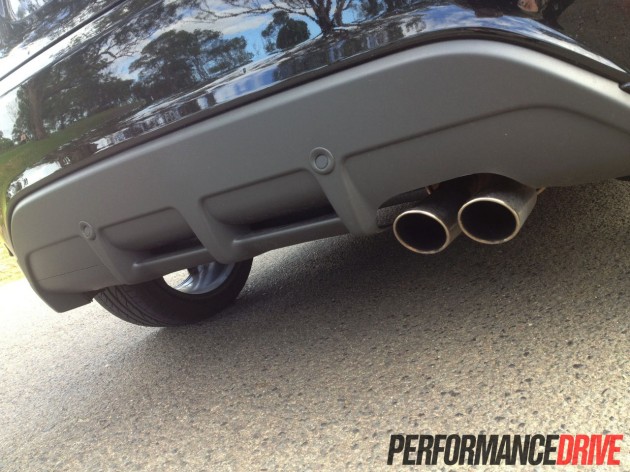 Under the hood of the tiny hot hatch is a tweaked version of Ford’s naturally-aspirated Duratec 1.6-litre engine. Ford was able to extract an extra 10kW and 9Nm from the engine (over Zetec models) thanks to a new air intake, a modified exhaust with larger pipes, and revised engine mapping, giving the Metal a total output of 98kW and 160Nm.

As a result, the redline has been raised an extra 300rpm, now blipping the limiter at a racy 7000rpm. 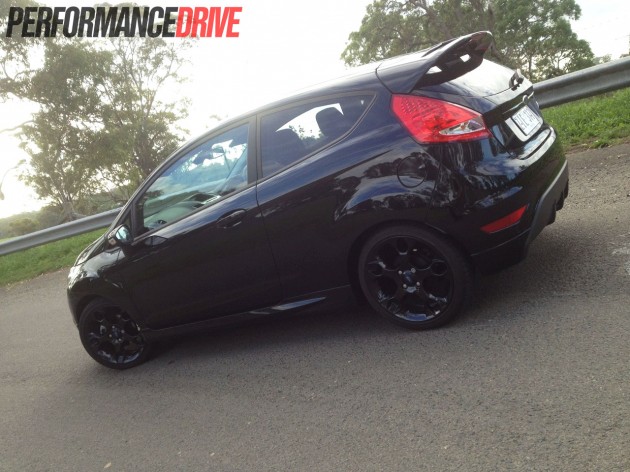 To go with the extra fruit under the hood, Ford has fitted up sports suspension. The Metal sits lower than the conventional Fiesta, allowing for more nimble handling.

The front seats are supportive and comfortable, and offer plenty of padding for hooking the little hatch into corners. Due to the two-door size, rear passengers are met with a limited amount of legroom and headroom – a space best left for kidlets. It is possible to fit up a baby capsule (with two points on offer), but again, room is very limited. 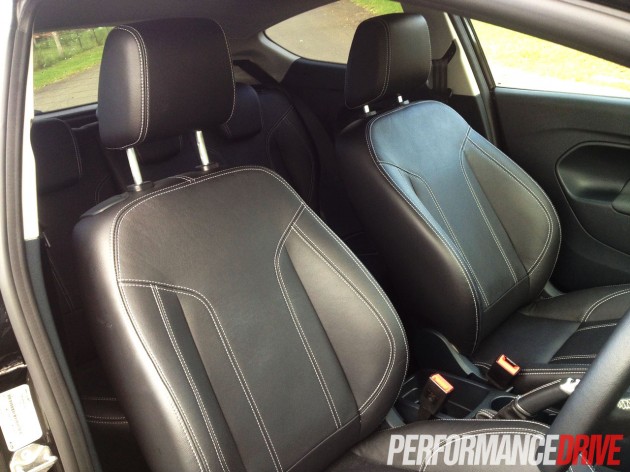 The two-door Fiesta has 281 litres of boot space available should you want to pick up some groceries or household goods. And if you lay the rear seats down, you can swing past and buy that big screen TV you’ve always wanted, too.

Externally, the Euro-styled Fiesta Metal is very distinguishable from all other Fiesta models thanks to an aggressive bodykit, Panther Black metallic paint, and 17-inch black alloy wheels.

Highlight features include twin chrome exhaust tips, a silver-detailed front grille, a front and rear spoiler, and privacy glass to give it that dark sinister theme.

As far as looking the biz, the Metal has attitude in spades and looks everything but your regular shopping go-getter. Don’t ask for one in white, this limited edition model is available in black only. 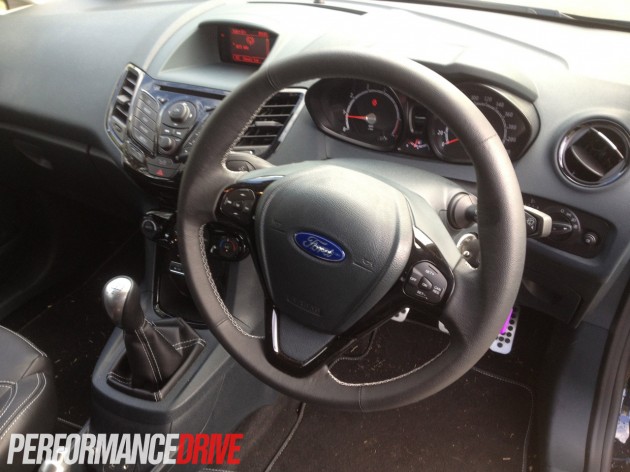 The Fiesta Metal comes with driver and front passenger airbags, side curtain/thorax airbags, and a driver’s knee airbag. It also comes with Ford’s Dynamic Stability Control, emergency brake assist, traction control, and ABS with electronic brakeforce distribution. As a result it scores a five-star ANCAP rating.

For something that looks this small and a little bit ‘cute’, it has a feisty side that begs you to yank at the wheel. The chassis performance is best described as nimble and very agile, willing to rail around anything you can throw at it, like many supermini performance models.

While the engine might not be overly powerful at 98kW, it’s willingness to rev and keep revving is certainly its best asset. And it’s pretty good on the ears too. We achieved a 0-100km/h acceleration time of 8.4 seconds.

The electro-steering system goes pretty much unnoticed, leaving you to fully believe, if you were told so, that it’s a hydraulic rack; feedback is very responsive and direct, and definitely feels well-weighted in all driving conditions. 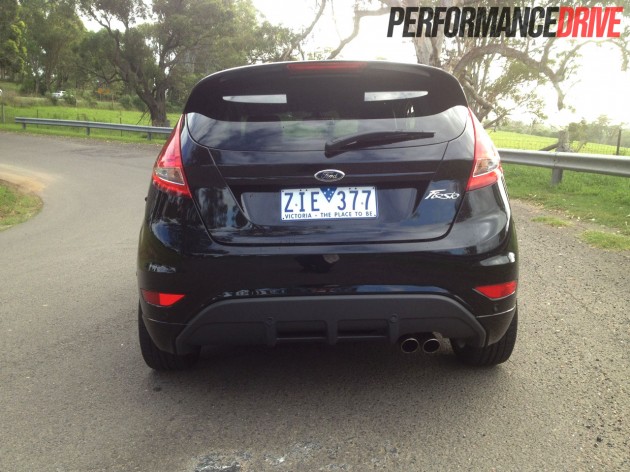 Brakes leave little to worry about, and are able to pull up the small hatch time and time again with good performance. Pedal feel is equally as impressive.

At freeway speeds you’re left floating between 3000rpm-3600rpm thanks to no sixth gear. The lower ratios are well-spaced and match the feisty little four-cylinder just fine, but again, it really does need that sixth ratio to bring revs down at high speeds. The gear throw isn’t the meatiest we’ve experienced, but it certainly doesn’t detract from wanting to slot gear after gear.

While it might sound like we’ve talked up the Fiesta Metal about as much one could, it really is a well-packaged little car that deserves praise.

For $22,990, you get a car with a well-built and comfortable interior, lots of cool standard kit such as rear parking sensors and Bluetooth, and a warmed engine that reveals itself the harder you push it.

You know it’s not the fastest car in the car park, but it has a genuine sporty edge thanks to some little tweaks that give it a cool, almost aftermarket/personalised character.

As a bonus, the Metal is likely to hold onto its value much better than the regular Fiestas. 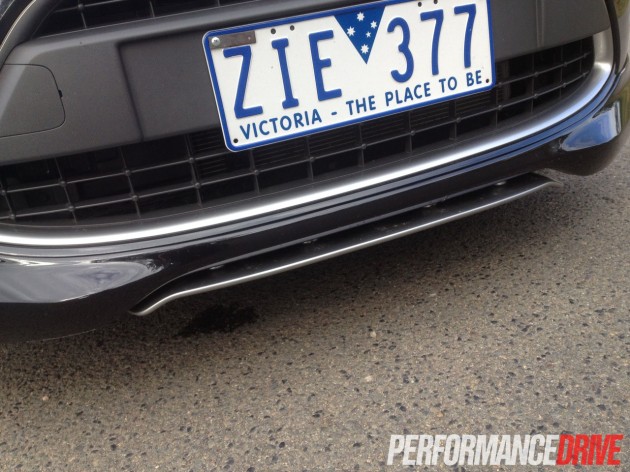 Hyundai Veloster – 1.6-litre four-cylinder, 104kW/174Nm – 1215kg – $23,990
The Hyundai Veloster is certainly a good-looking and popular little car. It offers loads of standard kit, and handles well in the bends. The naturally-aspirated engine isn’t as much fun as the Turbo model, but it’s not as expensive, either.