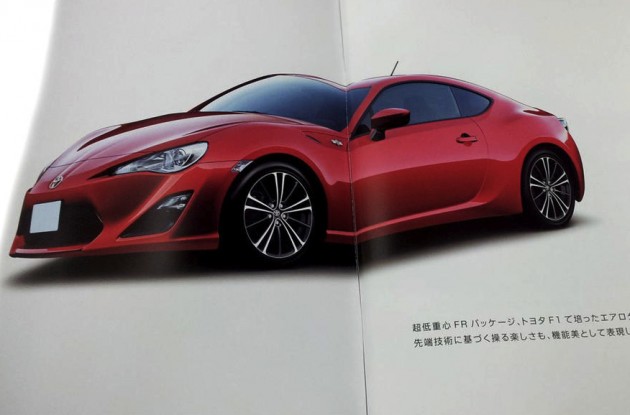 Like the previous images proved, the Toyota FT-86 production car will showcase a very similar exterior design as the previous concept models. This is a great move by Toyota as many thought the attractive elements, such as the flare and drama of the original design, might be sucked out of the concepts for production.

At the front there’s a distinctly aggressive front bumper bar with a low chin spoiler. In the centre there’s a large sporty air intake while the flat nose of the bonnet squashes down, leaving two additional contour surfaces for the spotlights.

Unfortunately, engine specifications are still sealed up tight in Toyota’s vault. It will feature a Subaru 2.0-litre boxer engine though with direct injection technology. Overall output is likely to be in the 150kW region.

Other interesting details that have come about include the inclusion of a push-button start for all models as well as 7500rpm redline, as previewed on the dashboard image of yesterday’s report. All trim levels will also receive a six-speed manual transmission and a limited-slip differential.