The next-generation 2015 Ford Mustang could be coming to Australia as Ford prepares the 50th-year anniversary celebration model. Ford will be sending the new Mustang to some international markets, coinciding with the ‘Ford One’ strategy. 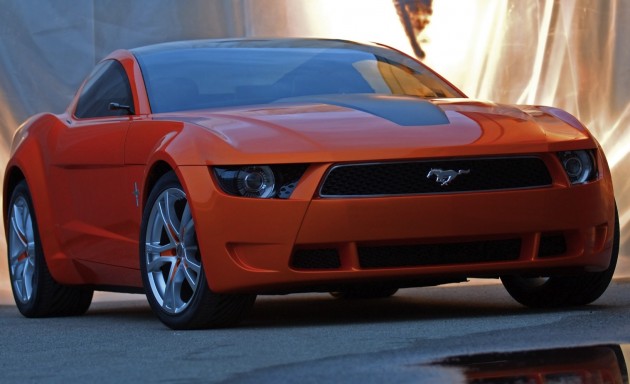 The Ford One strategy is all about effectively saving money by spreading out and distributing engineering and development costs into other markets with certain models. The company already exercises the strategy with the new 2012 Ford Focus, which is manufactured in multiple countries.

However, the 2015 Ford Mustang won’t be going completely global though. According to international reports the new Mustang platform will be somewhat interchangeable and developed as a right-hand drive variant, and is set to go on sale in the UK, Japan, and, in Australia.

A Ford insider recently told AutoExpress in the UK that designs for the new Mustang (2015 model year) are being developed in various countries, including here in Oz. The insider said the 50th anniversary model will be more compact and resemble the original 1964 model more closely than ever, saying,

“The design studios in Europe and Australia are working on it, as well as those in America. It will be smaller and closer in spirit to the original 1964 Mustang.”

Other dramatic changes for the new model are said include the introduction of an independent rear suspension layout, possibly incorporating a torque vectoring differential system similar to the one seen on the 2012 Focus, albeit, a bit chunkier.

As for the engines for the next Mustang, details are still a little iffy but reports say it will get an entry-level 2.5-litre EcoBoost four-cylinder unit offering around 225kW, while a flagship model will come with a proper V8 of around 5.4-litres in capacity, churning out 373kW.

As mentioned, it’s still a bit early for anything official but the 2015 Ford Mustang is expected to hit the showrooms some time in 2014. Look out for more details and a possible more definite confirmation in the near future.