A MINI ALL4 Racing has won the 2012 Rally Dakar with a time of 38 hours, 54 minutes, and 46 seconds. It was driven by Stephane Peterhansel and co-driver Jean-Paul Cottret. 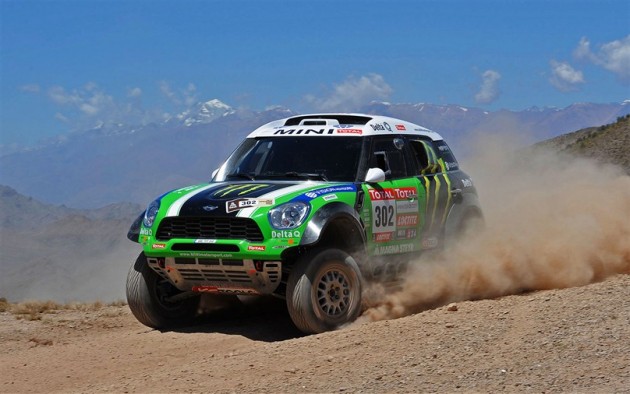 After 14 torturous stages, all five MINI ALL4 Racing vehicles in the X-raid team finished in the top ten. Peterhansel had already won the ‘toughest rally in the world’ six times on a motorcycle in previous years.

“On behalf of MINI, I would like to congratulate Stéphane Peterhansel, his co-driver Jean-Paul Cottret and the entire X-raid team on their triumph at the 2012 Rally Dakar.

“To stand on the top step of the podium on ten occasions after the toughest rally in the world is quite simply an unbelievable achievement. Sven Quandt’s team has once again proven its class with all five MINI ALL4 Racings finishing in the top ten.”

The MINI ALL4 Racing vehicles are very loosely based on the MINI Countryman production vehicles. They feature a complete purpose-built chassis, suspension, and cockpit, all made to suit the gruelling event. Power comes from a 3.0-litre twin-turbo diesel BMW straight six, producing around 230kW (315hp).

Click play on the video below for an overview of the event. Well done MINI ALL4 Racing.

It's been such an iconic model over the last few decades. And now, the all-new 2022 Subaru WRX promises to...