Lexus has revealed that it will be releasing the Lexus IS F TRD Circuit Club Sport Concept bodykit onto the market, at least in Japan. The aggressive kit was first revealed on the Lexus IS F at the 2010 Tokyo Auto Salon. 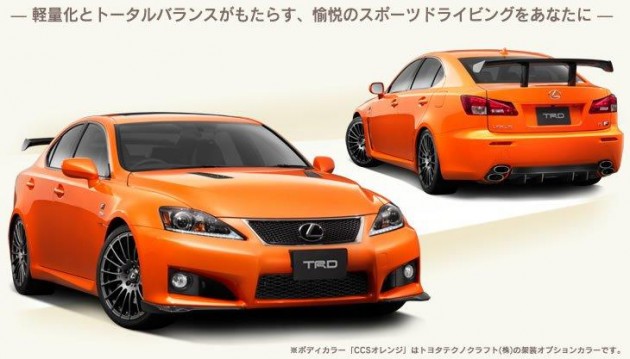 Apart from the bright orange paintwork and the rear wing, the Lexus IS F CCS Concept on show featured a subtle yet sporty performance aero kit with various carbon fibre trimming details and downforce-aiding enhancements. TRD is now offering the kit for the production Lexus IS F.

It features a carbon fibre front spoiler with additional corner extensions, new air intakes in a revised front bumper bar, and a lighter weight bonnet (whether it is made from carbon hasn’t been confirmed) with unique black heat-extracting vents.

Since most of the revisions are made from carbon fibre, TRD also fits a new set of dark ‘shadow’ forged aluminium or magnesium wheels. 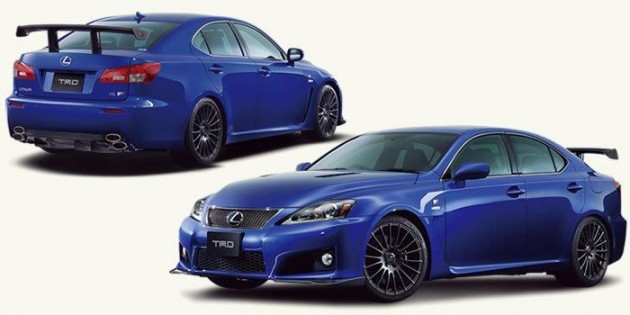 Perhaps without the rear wing it could go for that more discreet aero look, and be marketed as a Lexus IS F ‘competition pack’ to go up against the BMW M3 Competition. What do you think?

Stay tuned for updates as to whether the Lexus IS F TRD kit will be made available Down Under, and if so, at what cost.