Jason White has won the inaugural round of the 2011 CAMS Australian Targa Championship Targa High Country rally, despite his Lamborghini Gallardo being on fire for half of the run. 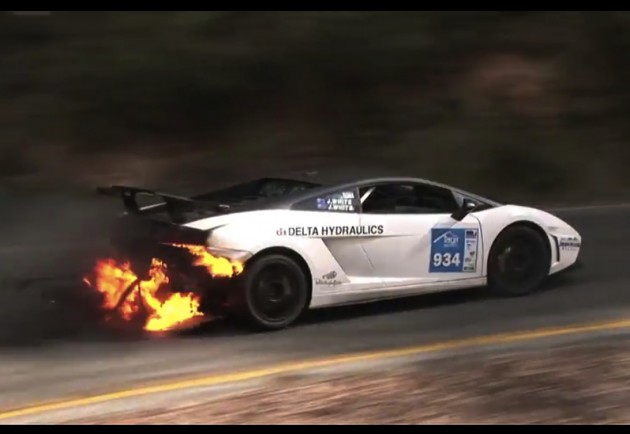 The Lamborghini Gallardo is no stronger to sudden bouts of spontaneous combustion, with several examples going up in flames all around the world in the past year or two.

This latest incident didn’t stop Jason White winning the Targa High Country round though, ahead of Tony Quinn and Naomi Tillett in their Nissan GT-R, and Matt Sims and Denis Sims also in a Nissan GT-R.

It’s unknown what actually caused the fire, but whatever it was, it didn’t stop White punching on and claiming the win. White said in a recent sportcom report,

“It was on fire from about the half way mark, but we thought it was best to get up to the finish where there were more fire extinguishers, rather than trying to put it out with ours. And obviously there was a win at stake so we just pushed on.

“It was a bit hard to concentrate with a fire ball hanging out the back but man, what a dramatic finish.”

Funnily enough, White and his hot Lamborghini Gallardo pulled up at the finish line which was situated outside the Mt Buller fire station.

Click play on the video below for to see White driving the Gallardo on fire during a section of the rally.

The next round will take place in Hobart for the Targa Wrest Point. Hopefully

See below for some of the race results:

Even though the 2022 Kia Cerato GT does not offer the full ‘guns-blazing’ of something like a Hyundai i30 N...

It might not look it but the 2022 Porsche Panamera Turbo S will wallop most supercars around a circuit or...

Lamborghini has seen its best-ever year for global sales in 2021, with double-digit growth reported in all three main worldwide...