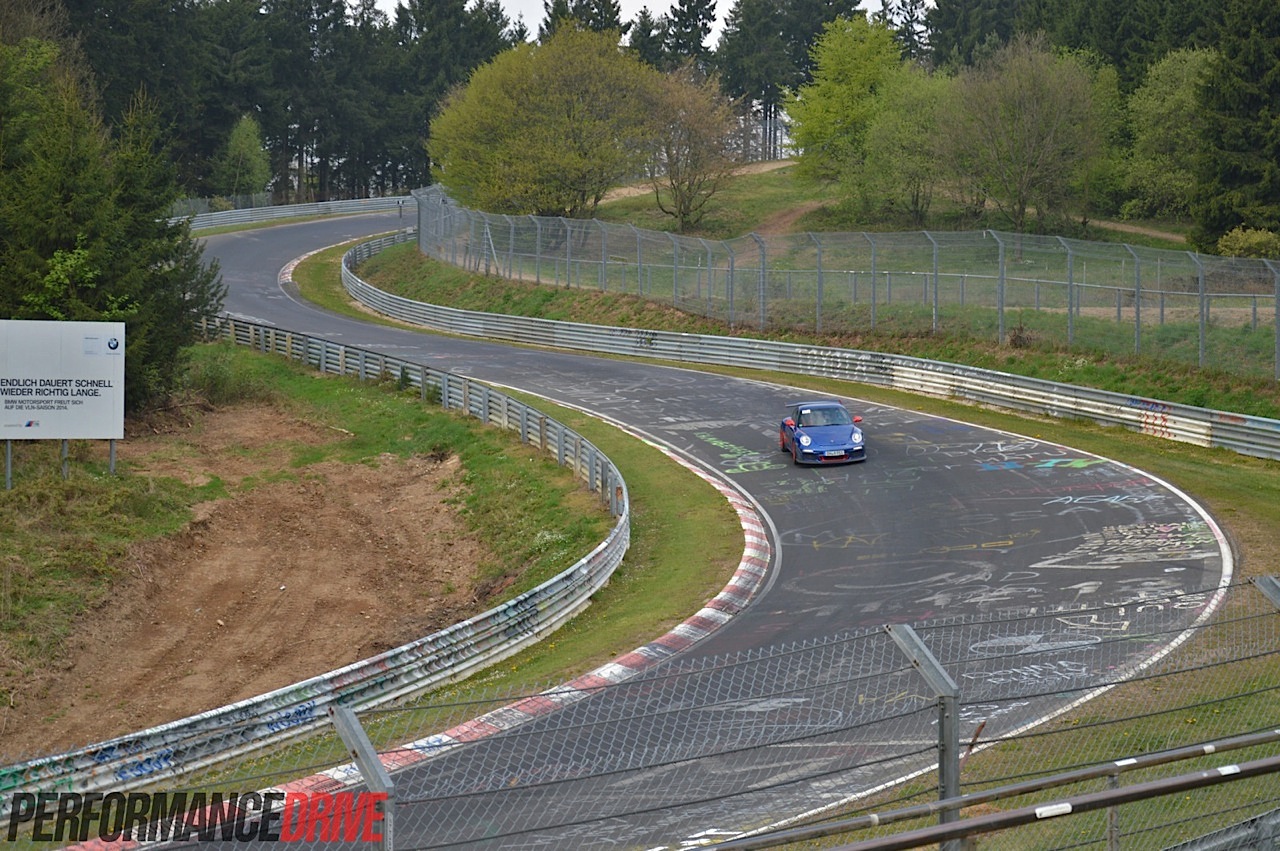 You always hear manufacturers boasting about their cars that have been developed on the Nurburgring, or clocked such-and-such time on the Nurburgring. What is it that makes this place so special? Why is it regarded as the holy grail of testing grounds? 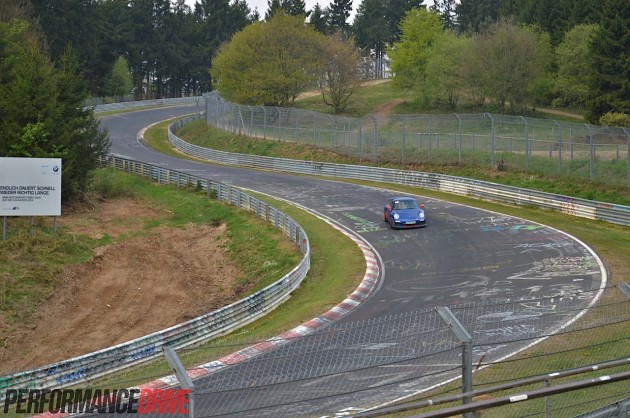 The Nurburgring, or more specifically the Nordschleife (north loop), has been around since 1927. But only recently have carmakers been using it as a seal of approval for their vehicles, sometimes purely for marketing purposes.

It works quite differently to most other circuits around the world. You see, during some parts of the day and when it’s not snowed over, the Nordschliefe is essentially a public road. A toll road which anybody with a car and licence can drive around for fun.

In reality though, this isn’t a circuit for car enthusiasts. It’s a circuit for driving enthusiasts. No car wants to endure 154 punishing corners for 20.8km per lap. There’s jumps, tyre-tearing off-camber turns and chassis-pounding, high g-force banked corners, changing weather conditions, long uphill straights… the lot. If a car has something to hide, a little defect or lack of engineering, the Nordschleife will uncover it very quickly.

Over the years many people have crashed and many others have died at the circuit. One of the most famous accidents was Ferrari F1 driver Niki Lauda’s horrific crash near Bergwerk during the 1976 Formula One Grand Prix. In those days the F1 used to run on the full 22km circuit. It now runs on a newer, 5.1km track connected at the end of the Nordschleife.

Lauda suffered serious burns to his face and head, leaving him scarred to this day. The exact cause of the accident is still unknown, however, the Grand Prix was running in torrential rain. Interestingly, Lauda proposed to the other drivers that they boycott the event before it begun. They declined. It was the last F1 race that ever took place at the north loop. (If you haven’t already seen it, we encourage you to watch the movie Rush, which details some of the background behind the crash.)

Visiting the Nurburgring can be a surreal experience. During our recent trip in the 2014 BMW 520d M Sport, we decided to go for a thorough walk-around and try and find out more about this driver’s haven and its location. 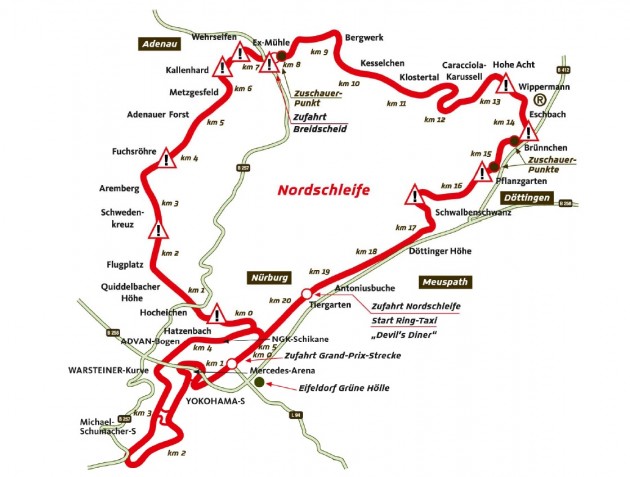 Where is the Nurburgring Nordschleife?

The Nurburgring is located in the Eifel Mountains, about an hour south of Cologne (Koln) in west Germany. It sits in the middle of the countryside, with rolling hills and lots of open land surrounding and within the circuit.

Various small towns are scattered around the entire track, and in some areas the track literally crosses over towns and runs right up against public roads. At 20.8km long, it’s the longest circuit in the world, and because of this, it takes a good hour or two to explore the area in and around the facility. 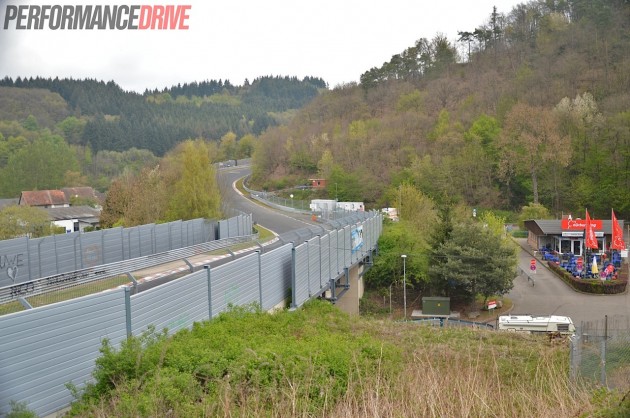 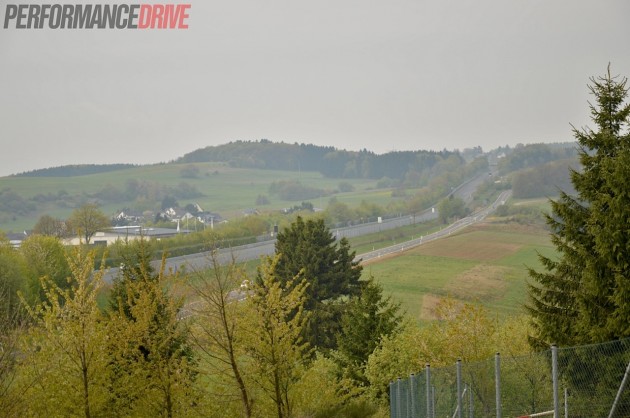 Where are the best vantage points for spectators at the Nurburgring Nordschleife?

The amazing thing about it is the sheer size and the nature in which it rests. As mentioned, normal roads run right up next to, over and under it. This means there are heaps of places to get very close to the action. We decided to see how close we could get on a normal weekday and were surprised at how easy it is to stand within a metre of the tarmac in various places. To reach some points of the circuit you need to walk up mild bush walking tracks.

It’s quite eery knowing there is so much automotive history at this place. So many people have lost their lives here and so many legendary racing drivers have felt the brunt of its potential, unforgiving danger. Yet, during a normal day the only things around are the huge pine trees that stand silently, like war-ravaged grandfathers that have seen everything but carry on as if nothing has happened. It’s so quiet and chilling, it sends goosebumps down your spine.

One of the main spectator areas is at the Brunnchen corner, just off the B412. Here, there is an open dirt carpark which allows you to park about 10 metres from the track. When there isn’t a big event on or a major race you can sit in your car with lunch and relax, watching the minor track days or manufacturer testing stints take place right in front of you. 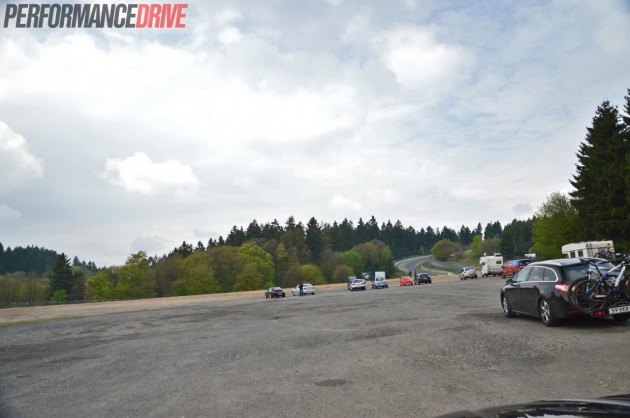 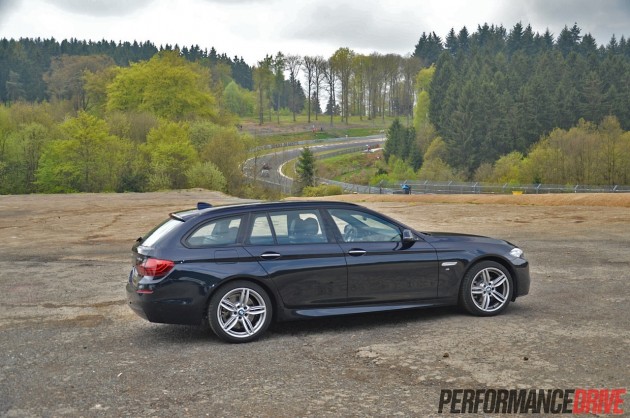 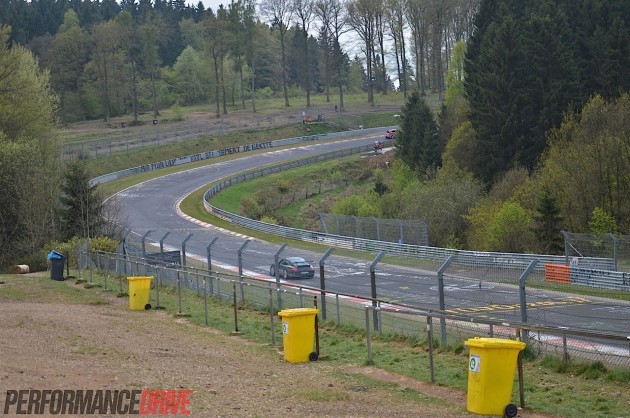 We missed a manufacturer test day, unfortunately. Carmakers regularly run prototypes around the circuit during the week until the track opens to the public at about 5-6pm (depending on the day). You can become an instant spy photographer quite easily. It’s just a matter of sitting tight and waiting for the next Porsche 911 prototype to come screaming around the corner.

Another good spot is at the Kleines Karussell (mini carousel) which is the second-last corner of the circuit before the huge main straight. It takes a bit of a walk in an open grass field to get there, but once you’re there you have plenty of room to set up some chairs and relax. We noticed a full BBQ setup and camp fire when we were there – also lots and lots of empty beer cans. 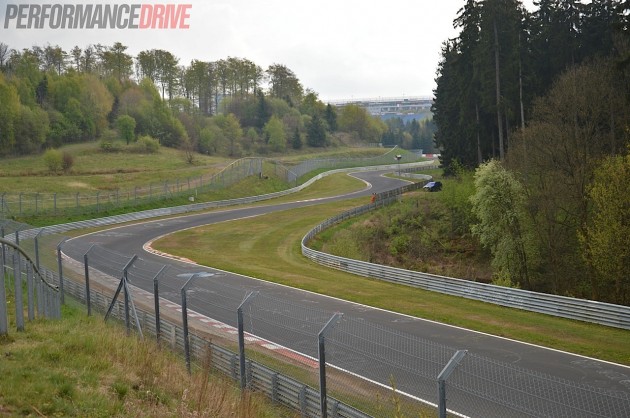 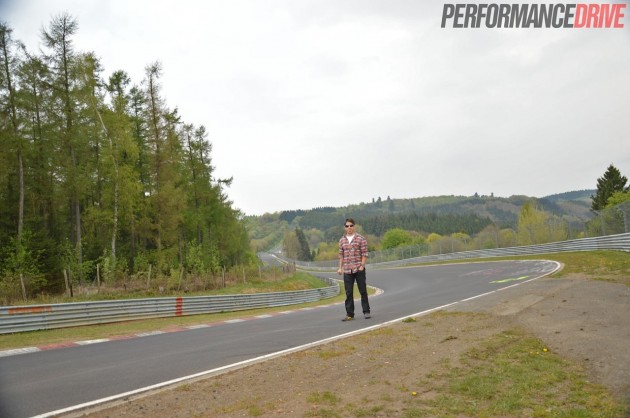 The other main spot is at Hatzenbach, which is at the end of the S-bends near the start of the lap. Here there are various points where you can stand a couple of metres from the tarmac, particularly next to the straight that leads down to the famous Quiddelbacher Hohe jump (above). The day was so quiet when we were there we managed to sneak onto the track via an open gate to snap a quick selfie.

Apart from these main spots, there are heaps of little hideaways and secretive access points that you can explore. You just need to grab a sat-nav and work your way around the circuit. You could spend days having fun doing this. We did for two days and still didn’t get to every area.

Can anyone drive on the Nurburgring Nordschleife? And how much does it cost?

As far as we know, anybody can drive the circuit on the days it is open to the public. The days are called Touristenfahrten. Cars have to be road legal and registered. We’re not sure if you need a valid driver’s licence as we weren’t asked at any point. We’re sure one is required though as it is considered a public road as mentioned.

To pay you simply walk up to the pay booth near the start gates and pay for the amount laps you want. They then give you a little card which is used to swipe the boom gate. There are marshals there to help you out if you need it. 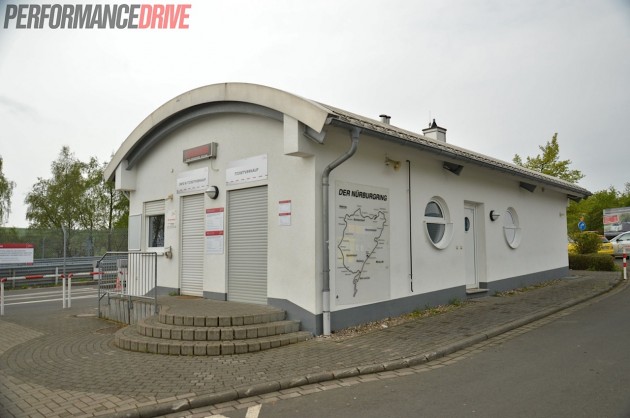 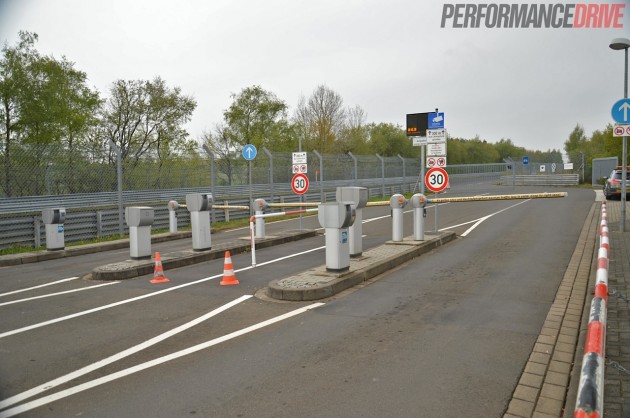 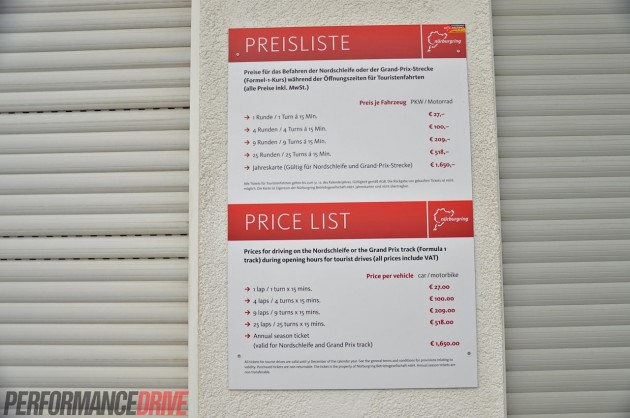 How fast can you go?

The best part. You can go as fast as you like. Although we wouldn’t encourage timing your lap on your first outing as it can be dangerous, you are free to test the full limits of your car. The main rule on the circuit while driving is to stick to the right and indicate right if you see a faster car coming up behind you to notify them that you have seen them, and you are letting them past.

During our lap in the video below, which was only our 9th lap of the circuit we’d ever done (excuses, excuses… we hear you), we managed to record a 9:24 lap time from bridge to gantry, which is not bad for a relatively low-powered diesel wagon.

Bridge to gantry is basically the area that most people time as the middle of the main straight is restricted during public sessions; it’s where the ticketing operation is held.

Bridge to gantry refers to the bridge at the end of the main straight to the Audi-sponsored structure which runs over the start of the main straight. Some media outlets use this section to time vehicles. Fans of Top Gear will remember this part as where Jeremy Clarkson went on a mission to record a lap time in under 10 minutes in a 154kW V6 turbo-diesel Jaguar S-Type. He managed 9:59.

See below for our lap. Although we would have liked to do it in the new M3 or an M5, it wasn’t possible on the day.
(We tried our best to line up the camera with the head-up display so you can see the speed.) 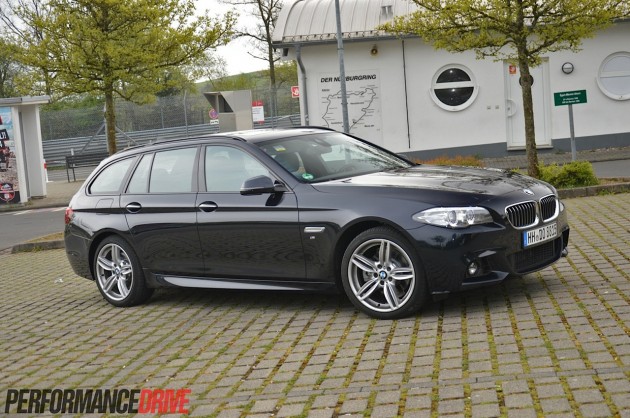 Car used in the video:

Say hello to the fastest and most powerful convertible in the world. Well, according to the maker. It’s the new...

French hypercar manufacturer Bugatti has released a short clip online teasing the release of an all-new roadster ahead of its...

Audi has confirmed prices and specs for its flagship sedan, with the refreshed 2022 S8 landing in Australia bringing a...

GWM is expanding its range of electrified SUVs here in Australia with the addition of the Haval Jolion Hybrid competing...

Nissan caught enthusiasts by surprise by presenting the new Nissan Z Proto Spec at a recent Z Car Club of...

Just a few months after making our jaws drop to the floor with its first ‘Turbo Study’ for the 964...