An eight-car crash has occurred at the famous and treacherous Nurburgring circuit in Germany, involving a current BMW M3 Ring-Taxi, a hire-car Chevrolet Corvette, a 964 Porsche 911 and a BMW 3 Series, and others. One driver was taken to hospital with serious injuries. 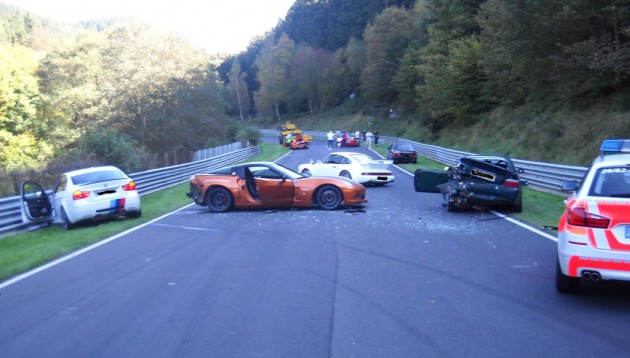 The big eight-car Nurburgring crash, which occurred just yesterday at Nordschleife at around 2:00pm, was a chain-reaction accident which was caused by three cars slowing for a construction zone – why road works were going on during a track day is not clear.

According to a police report, a driver from the UK suddenly jumped on the brakes at the ‘Bergwerk’ section of the Nurburgring – where construction work was underway – to avoid hitting three other cars that were already slowed.

He apparently swerved and hit the first car, taking a momentary detour off the track, sliding for around 50 metres, and then returned to the track, slamming into the other two cars.

A further three cars then came around and slowed for the initial crash, but a BMW M3 Ring-Taxi came around and could not stop in time, crashing into one of the three cars, causing another automotive chain-reaction, and another ‘sneeze’ of carnage as seen in the foreground of the image above.

Miraculously, all but one driver escaped without injury in the eight-car Nurburgring crash. The injured driver was taken to hospital in nearby Koblenz.