Previously thought to be called the A25 AMG, some details have been revealed on the new 2013 Mercedes-Benz A45 AMG hot hatch. The new model will take on BMW’s M135i hatch, and the Audi RS 3. 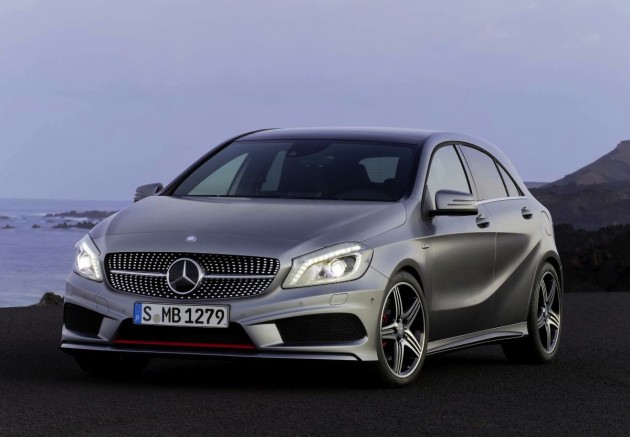 According to a recent Autocar report in the UK, the new hot hatch from Mercedes-Benz and AMG will feature a new 2.0-litre turbocharged four-cylinder engine, based on the unit seen in the A250 Sport (pictured). Tobias Moers, development boss at AMG, said in the report,

“Our goal right from the start was to match the output of the larger turbocharged 2.5-litre five-cylinder engine used by the RS 3.”

With that in mind, power output has been pitched at around the 246kW (330hp) mark, while torque is said to exceed 400Nm by a big margin. With the help of an all-wheel drive system and a seven-speed dual-clutch transmission, the pocket rocket is set to do the 0-100km/h dash in around 5.0 seconds.

Following the AMG philosophy, the fizzing hot hatch will feature a full sports suspension system and re-configured suspension dynamics over the normal A-Class. An insider has apparently revealed to Autocar that the new model will be capable of tackling corners at higher speeds than any of its rivals.

That’s a pretty big statement. If it is true, the A45 AMG could potentially be quicker overall compared to those main rivals. Not only will it be quick though, it’s also set to be the most fuel efficient, with thanks to technologies such as stop-start and a form of brake-energy regeneration.

We can’t wait to find out the full official details on this sharp new hatch. All is expected to be revealed in the very near future. It will go on sale during the first half of 2013.