Hyundai and ARK Performance have joined forces to come up with a special racing Hyundai Veloster turbo concept which is set to be on show at the 2011 Specialty Equipment Marketing Association (SEMA) event in the US. 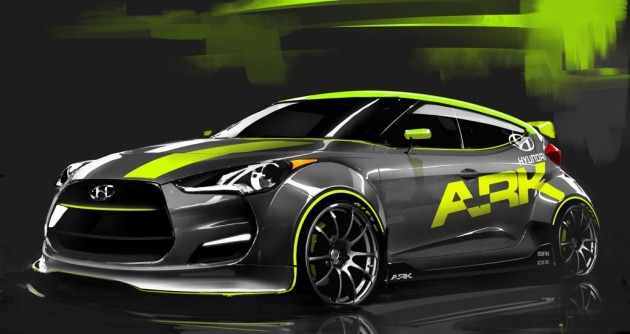 Looking to be one of the main Hyundai attractions at SEMA 2011, the ARK Performance Hyundai Veloster turbo will feature a dramatic new body with pumped wheel arches front and rear, with a low and large front spoiler and a big rally-style wing on the rear tailgate.

Under the bonnet, the ARK Performance Hyundai Veloster turbo will show off a comprehensive turbocharged engine kit comprising of an ARK Performance twin-scroll turbo, an intercooler, and an ARK Grip exhaust system, all promising to take standard Veloster power from 103kW to 150kW.

“Our ARK Performance Veloster will bridge the realm between an affordable sports car and an extreme motor sports vehicle.”

As mentioned, the ARK Performance Hyundai Veloster turbo will be on display at the 2011 SEMA show in Las Vegas, starting November 1. It’s unknown at this stage if the kit will be made available for the road-going Hyundai Veloster, well, maybe not the complete bodykit, but at least the turbo kit. We’ll keep you updated in any case.

The Hyundai Veloster will go on sale in production trim in Australia towards the end of this year.

What do you think of these preview images? Doesn’t look half bad? It kind of makes you think what Hyundai could do with the Veloster in terms of coming up with a World Rally Championship car.

The 2023 Hyundai Palisade facelift is just around the corner, and today prices and final specs have been announced for...

Hyundai and Rolls-Royce have announced an unexpected collaboration that looks set to result in a live demonstration of a hydrogen...