Chevrolet has released official details on the new, top-spec, now most-powerful Camaro ever, the 2012 Chevrolet Camaro ZL1. It features a 580hp (432kW) engine, and it will also get new technologies, including Chevrolet’s latest Magnetic Ride Control and Performance Traction Management. 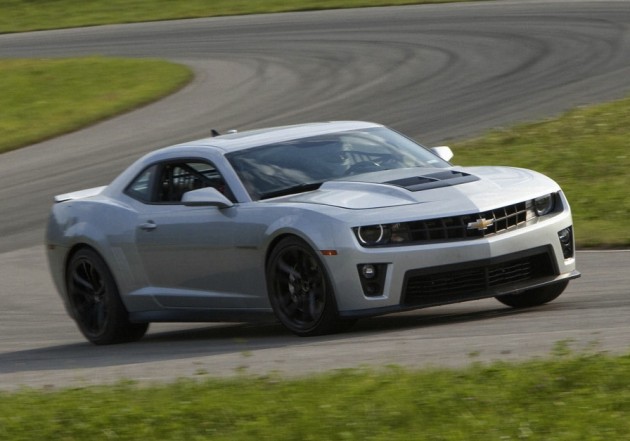 As previously reported, the new 2012 Chevrolet Camaro ZL1 will get more than 570hp (425kW). Chevrolet has revealed it will come with a 6.2-litre supercharged V8 outputting 580hp and whopping 754Nm of torque, making it the most powerful Chevrolet Camaro in its almost exactly 45-year history (the Camaro will celebrate its birthday on September 29).

This is some very serious horsepower for America’s most popular muscle car, as it puts it on the map ahead of the Ferrari 458 (419kW) and, more crucially, the Mercedes-Benz SLS AMG (420kW). Al Oppenheiser, Chevrolet Camaro chief engineer, spoke about the power in a recent statement, saying,

“The Camaro ZL1 delivers supercar performance and technology in the sports-car segment. For sheer power, the ZL1 delivers more horsepower than a Ferrari 458, more torque than an Aston Martin DB9 V12, and a better power-to-weight ratio than a Porsche 911 Carrera GTS.

“The Camaro ZL1 also features exclusive chassis and traction technologies to offer the best of all worlds – including balanced handling for the track, acceleration for a drag strip, and the comfort of a daily driver.”

Those chassis and traction technologies refer to the new, third-generation Magnetic Ride Control and Chevrolet’s new Performance Traction Management system (PTM), which is also offered on the bigger brother to the Camaro, the Chevrolet Corvette ZR1.

Chevrolet’s third-generation Magnetic Ride Control is basically a suspension setup which allows for in-cabin adjustability. It also comprises of dual-coil dampers at the front and rear, with one coil placed at the top end of the shock absorber and one at the lower end. This, Chevrolet says, allows for more control of the magnetic flux in the shock absorbers when selecting between the settings inside the cabin (Tour, Sport and Track).

As for the PTM system, this uses the on-board traction control and stability control, as well as the magnetic suspension, variables to set up the Camaro ZL1 in the best possible way according to five different modes. These modes can be selected by the driver. They include:

These systems are said to really improve the Camaro’s overall balance and sound like fitting technologies for the powerful ZL1. Chevrolet will also be offering the 2012 Chevrolet Camaro ZL1 with the option of a six-speed manual Tremec TR-6060 MG9 transmission, or a six-speed Hydra-Matic 6L90 automatic.

The 2012 Chevrolet Camaro ZL1 will go on sale in the USA early next year. If only Australian GM would import these things. They have got to be one of the coolest modern day American muscle cars around, wouldn’t you say?