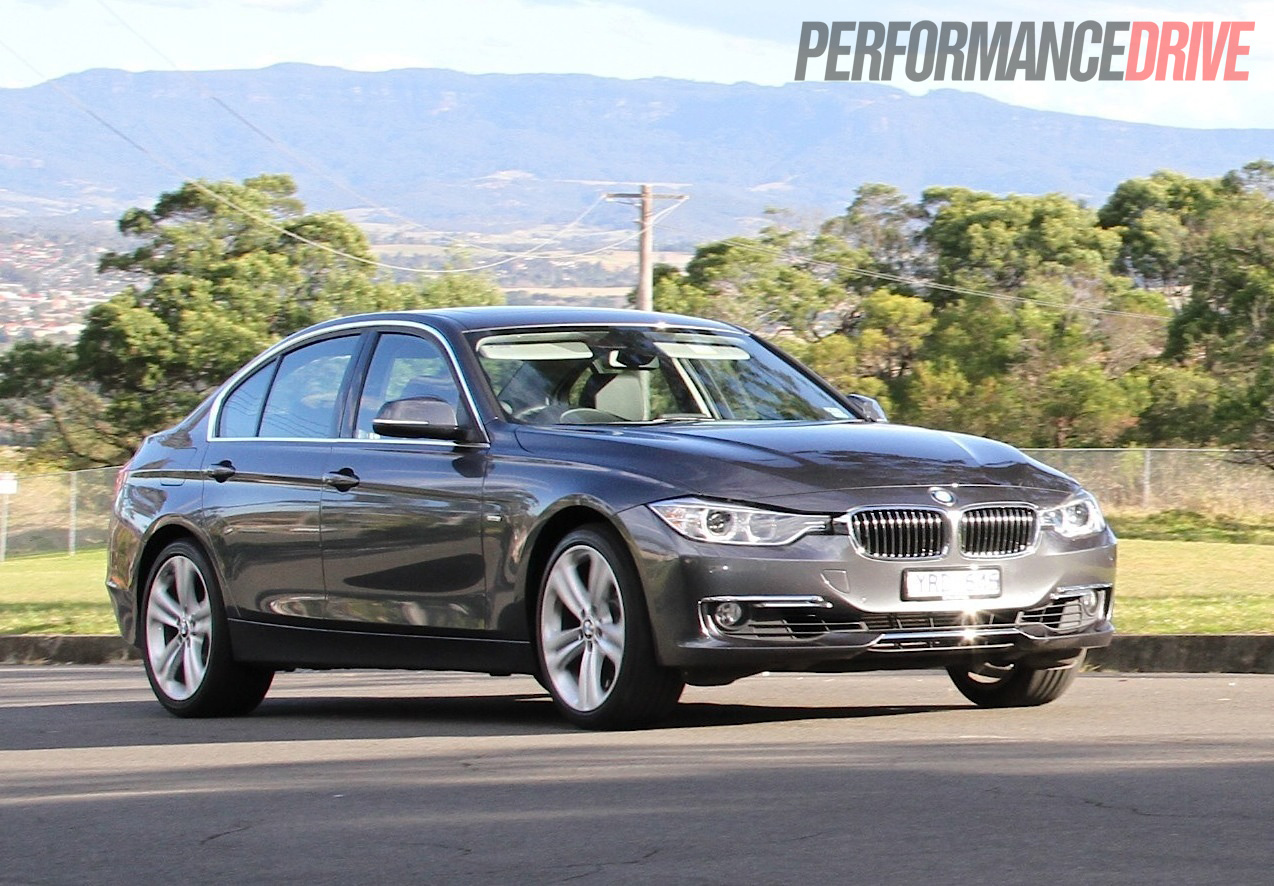 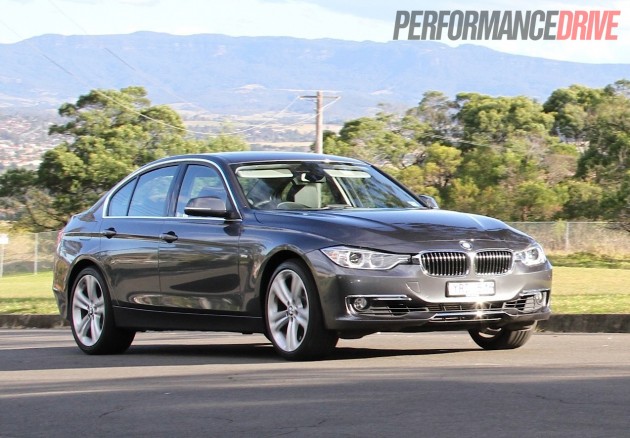 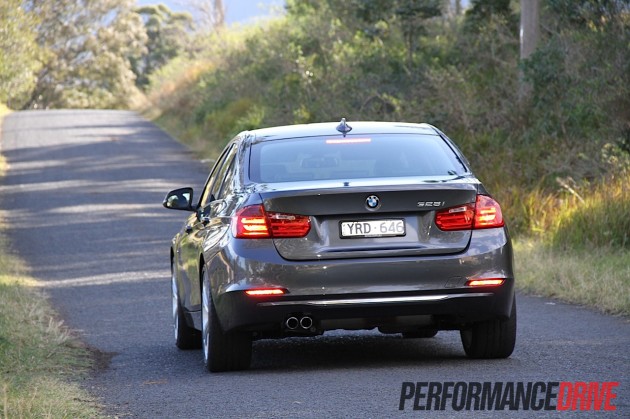 Being the replacement to the previous 330i, the 328i needs to be a fairly serious sports sedan with a desirable level of power. And it is. The 328i gets the full-cream version of BMW’s new ‘N20’ 2.0-litre turbocharged four-cylinder – a detuned version powers the 320i. It produces 180kW and 350Nm – down 10kW from the 330i but up 50Nm. It achieves more grunt than the 320i thanks to a different turbocharger.

The 328i is the second highest model in the range, sitting just beneath the 335i 3.0-litre inline six turbo. It’s available with the Modern Line ($1000) or Sport Line ($2000) option package, or the Luxury Line ($2000), as tested here. Each pack brings a handful of tasty options into an all-in-one show bag.

The Luxury Line pack on the 328i adds 18-inch alloy wheels, chrome pearl grey trimmings around the dash, chrome kidney grilles at the front, chrome door sills and exhaust tips, ‘Luxury’ badges on the front guards, and a full leather interior. You can further opt for fine Burled Walnut interior inserts for $400. 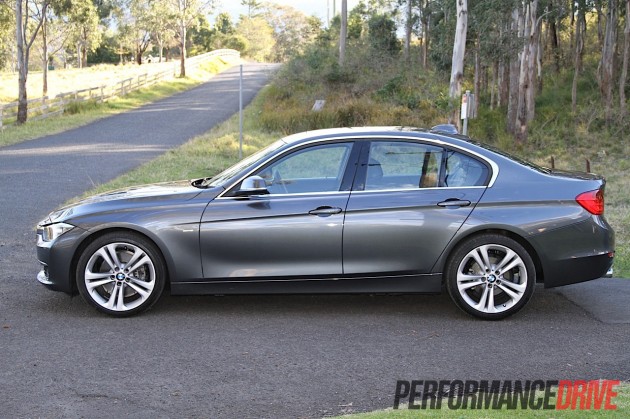 BMW has a bit of a tendency with offering loads of different optional extras with its vehicles. Some of which really should come as standard, especially being a premium marque, specifically making premium vehicles.

Standard equipment for the 328i is still a long list, with ample luxury and lots of technology. Inside, for instance, includes a comprehensive 6.5-inch multifunction display on the dash covering almost all functions and settings, except for the climate control.

It includes controls for the great-sounding HiFi Loudspeaker stereo system with nine speakers, as well as a display for functions such as the optional parking assistance and optional rear-view camera. Business satellite navigation is standard on all 328i models. 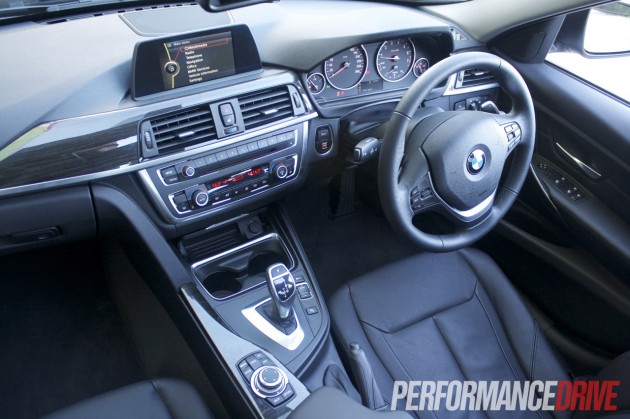 The interface, navigated through BMW’s new-generation iDrive rotary knob, is also an outlet for the interactive digital owner’s manual, and BMW’s Check Control system which is capable of checking the engine oil and keeping tabs on tyre pressures. 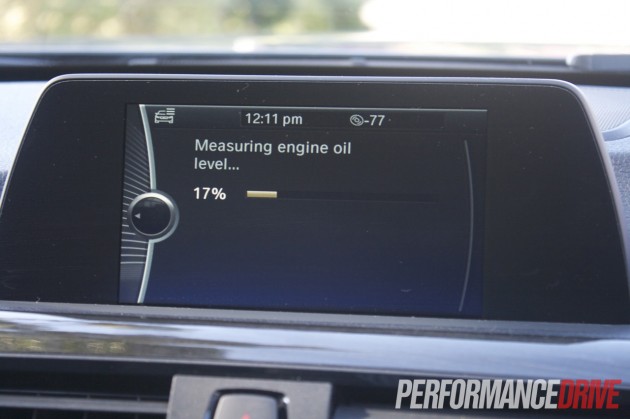 We found it all reasonably easy to use and navigate once you spend some time with it, and get used to its sideways sliding menu functions.

Some of these options we feel should come as standard equipment, such as the adaptive headlights and parking assistance systems; after all, the 328i is not the base model. 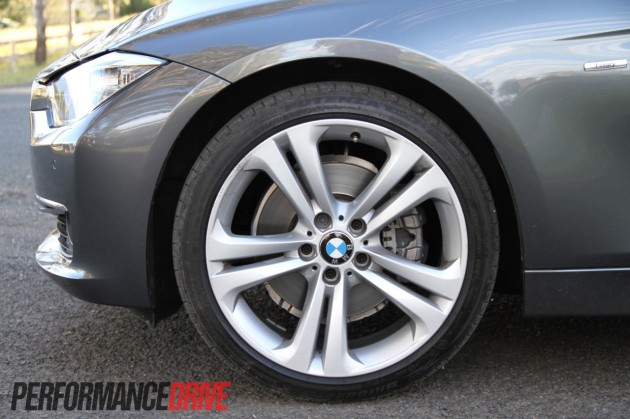 You can also opt for 19-inch alloy wheels (as tested) across all variants, which are $1800 if bought with any of the ‘Lines’, or $2800 on their own. They do give the mid-sizer a great look, really enhancing the 3 Series’s prestigious visual impact.

You’ll get mixed opinions on the new F30 3 Series styling. Some will point out that it is too complex and busy at the front, while others say it looks sophisticated and cool, like the Z4 sports car.

With the optional 19-inch alloy wheels, whatever way you go, you have to admit it does look a little exotic and firmly prestigious. The chrome details on the Luxury Line add a touch of sparkling class too.

In terms of design flaws, we noticed that the rear-seat entry is quite low. As in, the swooping and elegant roofline curves downwards and looks nice, but rear-seat passengers need to be wary not to bump their head. 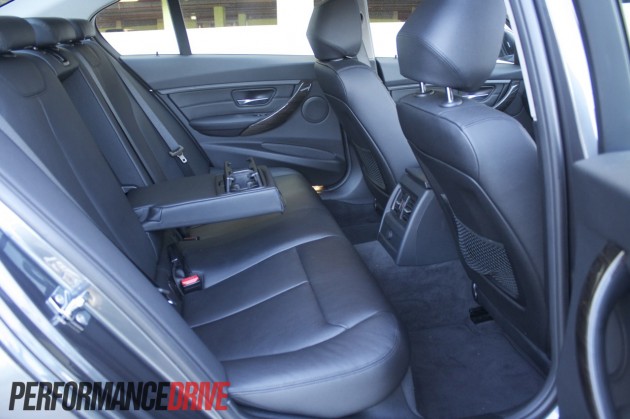 There is a high attention to detail throughout the design, with subtle air intakes for the brakes blended into the front bumper bar, and the more curved front guards which were designed to reduce air turbulence around the front wheels.

Inside, it’s a blend of typical BMW and modern infusion. There’s the red lighting for the instrument cluster and the usual speedo on the left and tacho on the right behind the steering wheel, yet you have a floating LCD screen and a flowing dash with multiple materials and shapes combining for a smart and sophisticated look.

The F30 interior layout has been overhauled to provide a big improvement over its predecessor, and not just the design, but also fit and finish. Every fixture feels strong and solid, with great build quality, while the material/colour combination attractiveness is high; you can sit comfortable for many many kilometres in this thing.

Like all new F30 3 Series models, Australia’s ANCAP has awarded the mid-sizer the full five stars for safety. The highlight saftey feature of all F30 models is something BMW calls ‘Active Safety’. Basically, this incorporates a number of features to help reduce the severity of an accident by preparing the car before one happens, including shutting all the windows and activating the belt tensions. 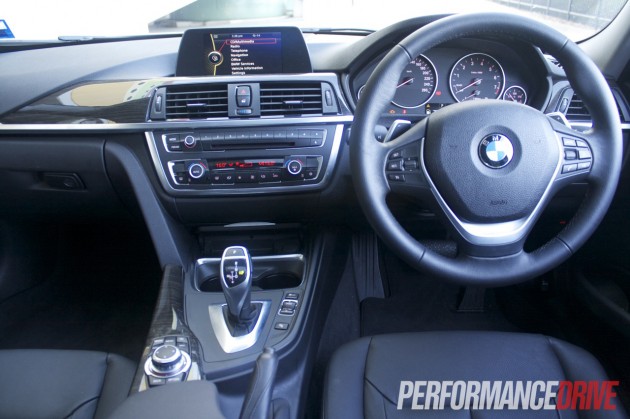 You can select Sport + using the Driving Experience toggle, which is on all new 3 Series variants. This will firm up the suspension and tightened up the steering and throttle response. Even so, during our usual mountain test route, the front suspension did crash about a couple of times over some of the more serious undulations. This could be partly due to the large 19-inch wheels.

For a normal car, this is very acceptable, but for a BMW 3 Series, a synonym for ‘driver’s car’, we were a bit disappointed. High-speed stability is also compromised, we feel, making way for the more absorbent and comfy setting. We’d simply go for the Sport Line pack with the M Sport suspension (as tested with the 320i a few weeks ago). 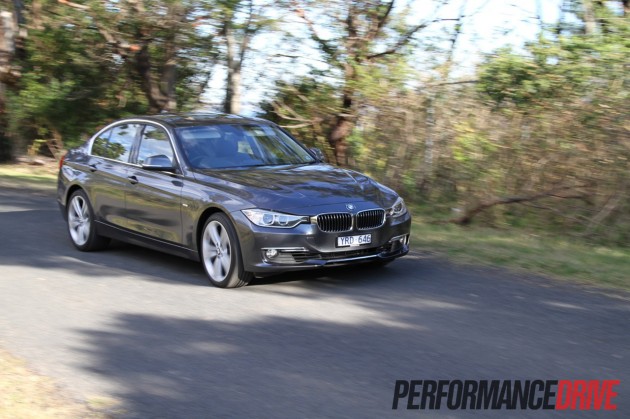 Other than this, the 328i is a proper hustling sports sedan on a mission. The 2.0-litre turbo engine loves to rev all the way to its 6500rpm redline. It pulls hard in every gear too, with acceleration from corner to corner capable of blowing you away.

We timed 0-100km/h in 6.0 seconds in Sport + mode with the traction control fully off. There was some chirping wheelspin off the mark as the 350Nm of torque commands more inertia than the 255-section tyres can handle. From there it almost seamlessly works through the gears, giving off a faint fart from the exhaust each time it swaps cogs.

Using the standard flappy paddles behind the steering wheel is a true joy. It changes down on demand – if the revs are within reason – and up very quickly, especially in Sport or Sport + modes. In Comfort mode and ECO PRO, the transmission is slower to swap cogs for a more soothing drive. In any driving mode in manual shift, selectable by pushing the gear lever over to the left, the transmission won’t hold a gear and will change up itself at redline. 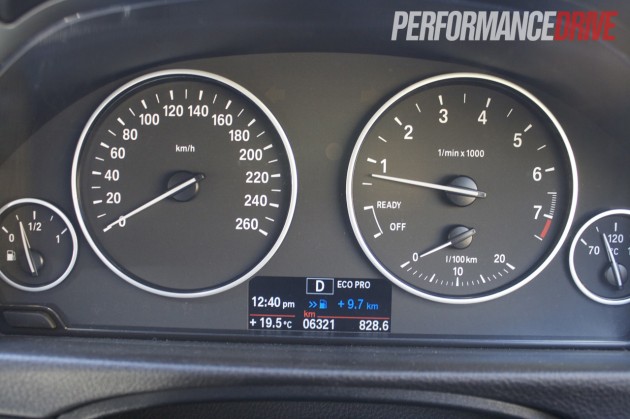 The ECO PRO setting involves lots of technology, including a mechanism which is capable of disconnecting the alternator to free up engine loads when charge is not needed. We found the mode to be quite sluggish around town, with an overly soft throttle response, however, it was a very economical way of cruising along highways once you’re up to speed. It’s a mode that really makes a welcoming difference to economy.

In Sport and Sport + modes, the throttle is sharpen up for touch-sensisitive response, the suspension is firmed up a bit, and the steering is more weighted to suit active driving styles. You can feel the difference in all four settings, and it is something that could be used very beneficially to both improve economy and experience the fun driving nature of a BMW. 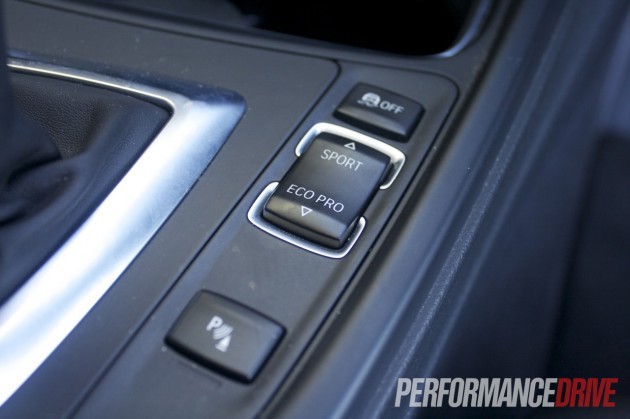 The 328i is packed full of technology, with computers controlling just about everything. As a result, it’s an economical and efficient cruising premium sedan that is also a powerful driving machine, especially in Sport + mode. As an all-round premium sedan, it’s a brilliant vehicle.

Our tip is to go for the Sport Line pack and tick the M Sport suspension box; you’ll have yourself an extremely rewarding, quick, and fun car to drive, yet one that is still concerned with the environment. 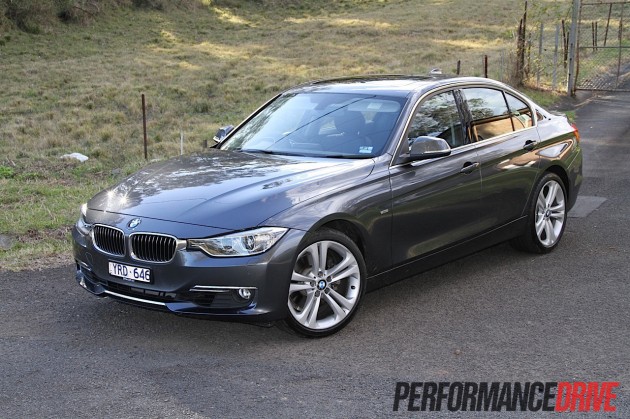