Evo magazine in the UK were recently given the opportunity to go for a spin in pre-production prototypes of the upcoming 2012 991 Porsche 911, and they have taken some shots of the inside, revealing the interior details. Here we see an image which also shows the new seven-speed manual gearbox shift pattern. 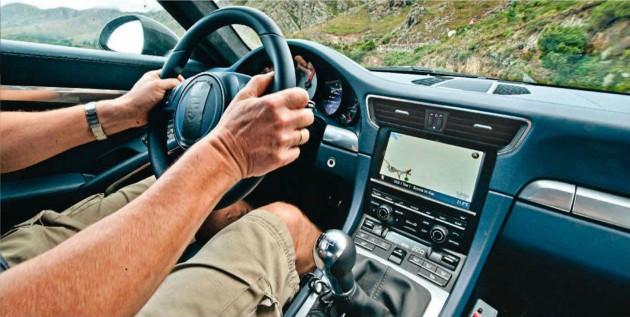 The 991 Porsche 911 will be built on an all-new platform according to the evo article, which will be a first since the 996 Porsche, and only the third ever, since the 930 and 964 were built on a very similar platform.

As far as we know, the 991 911 will be larger proportioned compared with the current 997 911, offering a larger wheelbase and more interior room. According to evo it does seem a little larger, with more shoulder space and a little bit more rear seat passenger room. The report also says the external dimensions look a bit different from the 997, saying the 991 looks a little wider and a little lower.

From the looks of this interior shot, the dashboard features an all-new layout, which, to be honest, almost looks a little dated don’t you think? Apart from the sat-nav screen obviously. But the buttons and dials all look fairly average; square and basic plastic. Some details will apparently be carried over from the Panamera. Of course, this is a prototype car so the actual trimmings and finishes may be different on the production car.

The report also confirms that the new 991 Porsche 911 will get electro-hydraulic steering, and come with an optional seven-speed manual transmission.

Power will come from a 3.4-litre flat-six engine for the base model, an engine that will be different from the Cayman’s 3.4-litre unit, offering up to 257kW of power. A 3.8-litre flat-six will continue to power the Carrera S models, however, output will be up around the 294kW mark.

The 2012 991 Porsche 911 will be unveiled in full detail at the 2011 Frankfurt Motor Show in September. Look out for our full coverage soon.

Fisker has made no secret of its hopes in becoming a massive player in the world of electric vehicles, with...