Siemoneit Racing in Germany has come up with a tuning kit for the 2011 Volkswagen Golf R. If you thought the standard Golf R has some balls, then you should see what Siemoneit Racing can do with it. 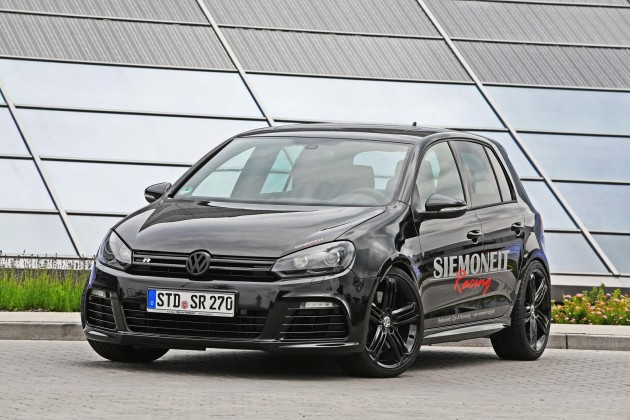 The Volkswagen Golf R is the most serious Golf Volkswagen makes. It comes with a 2.0-litre turbocharged four-cylinder engine outputting 188kW and 330Nm of torque. Equipped with a four-wheel drive system, the Golf R is able to power off from 0-100km/h in just 5.7 – very quick for a factory hot hatch.

This Siemoneit Racing Golf R edition though, features modifications to the engine and its accessories, including a new, freer-flowing stainless steel exhaust system, a cold air intake, and a tuned ECU, which takes the standard power and torque figures up to 261kW and 485Nm.

This is not the end of the road for this hottest of hot hatches though, Siemoneit Racing also provides a further step in performance upgrades if you wish. The company can add an intercooler setup, boost adjustments and a fuel system overhaul. These additional enhancements take power figures to an incredible 390kW.

This would be one intense pocket rocket on the road, with 390kW – over 500hp – propelling a car weighing around 1470kg (depending on manual or DSG transmission), it would absolutely blitz the 0-100km/h dash. The best part is, Siemoneit Racing will provide this much performance for €3896 (around $5150 Australian).