Volkswagen has unveiled a performance wagon concept at the 2013 Geneva Motor Show, called the Volkswagen Golf Estate R-Line. The car is based on the new Mk7 Golf wagon. 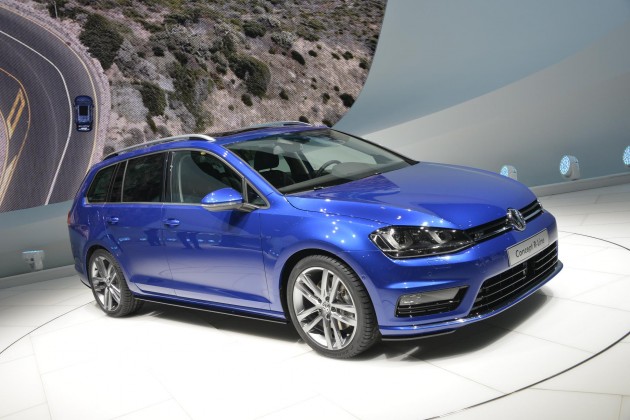 Similar to the Golf R, the Estate R-Line features a number of sporty highlights, including a neat bodykit with front and rear spoilers, a discreet rear diffuser, and various black or darkened highlights such as the headlights and grilles. A set of 18-inch alloy wheels complete the look.

Under the bonnet, power doesn’t come from a fire-breathing turbo petrol, instead, it comes with a 2.0-litre TDI turbo-diesel producing a more modest 110kW and 320Nm. Power is sent through a 4MOTION all-wheel drive system though to boost its active/sporty appeal.

The interior is similarly styled and dressed up like the exterior. There’s leather sports seats in two-tone colours, Crystal Grey stitching, and various ‘R-Line’ badges and logos, such as on special sill plates.

Although the R-Line Estate is a concept at this stage, it may eventually spawn a production version down the track. Volkswagen recently said,

“The Golf Estate Concept R-Line highlights the dynamic potential of the new body version of the Golf. For the first time: There has never been a Golf Estate in R-Line design; so the concept shows for the first time how Volkswagen might envision this version.”