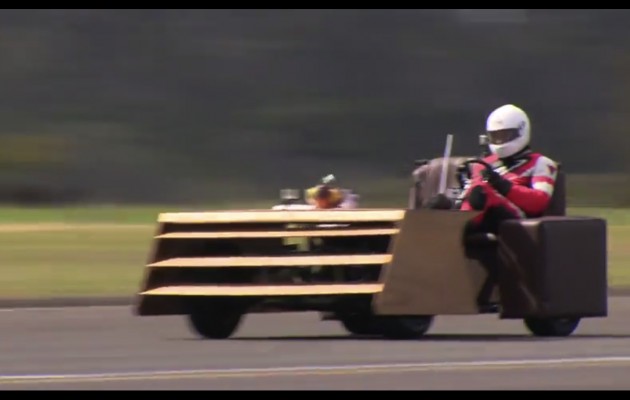 The previous land speed record for home furnishings was set by a British man named Marek Turowsk from Leicestershire. He managed to accelerate a couch up to 148km/h. Australians have proven there’s an even fastest way to be lazy by topping the speed by an additional 15km/h.

The super-sofa that broke the record was powered by a Suzuki GSX 1400cc engine. Although this engine normally has no trouble propelling the motorbike that it comes from well beyond 163km/h, project leader Paul McKinnon was concerned about the flawed aerodynamic qualities of the rather square piece of furniture. He recently said,

“It’s the oddest vehicle we’ve ever built. With race cars you can use the aerodynamic body kit that’s dictated by the regulations for each series.

“But with the couch it was a matter of just doing what we could. We kept it as low profile as we could, and tried to break the airflow with the coffee table.”

The project was conjured up after a campaign called ‘Add A Motor To It’ was developed by Ice Break Parmalat.

To secure a place in the Guinness Book of Records, the couch had to make two passes in both directions at the runway strip. Wind did make things a little scary, but one thing is for sure, the driver was certainly comfortable.

Click play on the video below to witness the run.