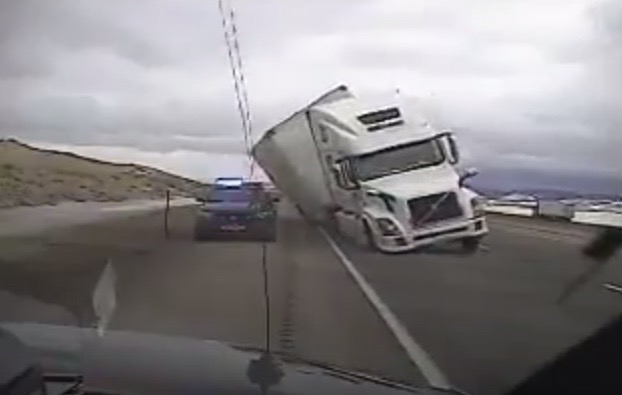 Dashcam footage is the source of amusement for millions of viewers, but sometimes an eery brush with death is captured that sends chills down the spines of motorists.

Looking like a scene from Final Destination, this footage from a police car shows another unoccupied police car completely pulverised by a wayward truck that was blown over by 113km/h winds in Wyoming, USA.

A warning was placed on that road stating commercial vehicles should not proceed. According to Fox News, the truck driver saw the warning and proceeded anyway, throwing caution to the um, wind.

The Volvo truck completely pancakes the Ford Taurus Interceptor as it slides to a halt. Thankfully nobody was inside but the police department had the following to say:

“All we ask is that you please follow high wind advisories and closures when you are traveling in our great state… even if you plan to travel at reduced speeds. Hopefully this video illustrates why.”