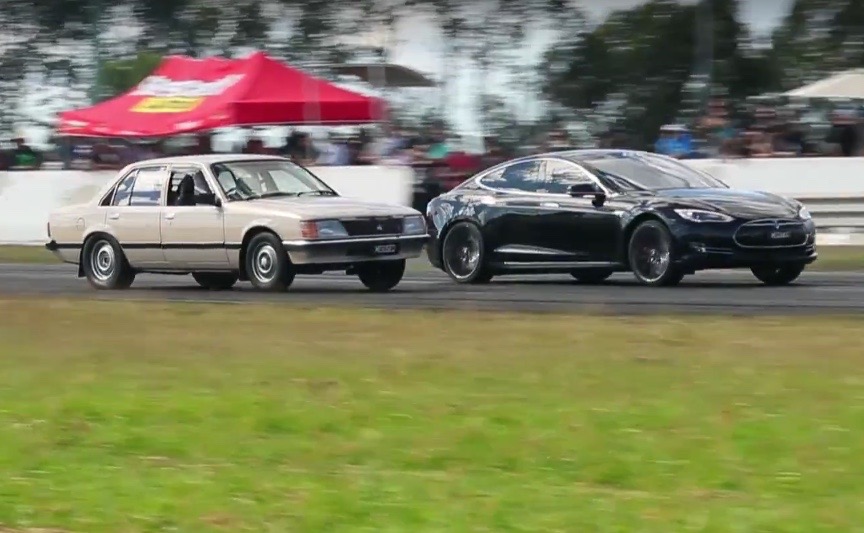 Tesla’s Model S, with its famed ‘Ludicrous Mode’, has destroyed some formidable opponents on the dragstrip, from roided-up muscle cars to actual hypercars. What makes these conquests impressive is the fact it resembles a luxury sedan, not to mention the fact that it blew everyone’s perception of EVs out of the weeds; before, most people thought of slow golf carts. With some 0-100 times as quick as 2.9 seconds recorded, the Model S P90D has proven the sheer terrifying performance potential of electric cars.

Nevertheless, Australia has no shortage of mentally deranged modified cars, with some generating well over 1000kW, with turbos and superchargers big enough to swallow a small child.

At events like Summernats and Powercruise, such as the weekend just gone’s Powerplay event, these loud fuel-burning monsters usually congregate and face-off against each other. At the aforementioned event, a silent cat was thrown amongs these petro-burning pigeons. With a stealth black HT ute, an innocuous beige VH Commodore sleeper, and a blue Camaro hiding a bent-eight behemoth under its giant hump, it was thrown into the deep end.

While ultimately giving them a good run, it didn’t quite have the neddies to match those custom-built hotrods. Which, let’s face it, is what the crowd wants at the end of the day. If the ‘golf cart’ had won, there would have been mass rioting. Still, maybe this points to a day when electric cars can become integrated into the show car and modified car scene of Australia? Check out the video below for some of the runs.