A dramatic Porsche 911 GT3 RS crash has been caught on film at the Nurburgring, right at the very dangerous Sprunghugel dipper. A spectator with a camera, standing literally trackside, escaped a flying wheel which torn off the Porsche in the incident. 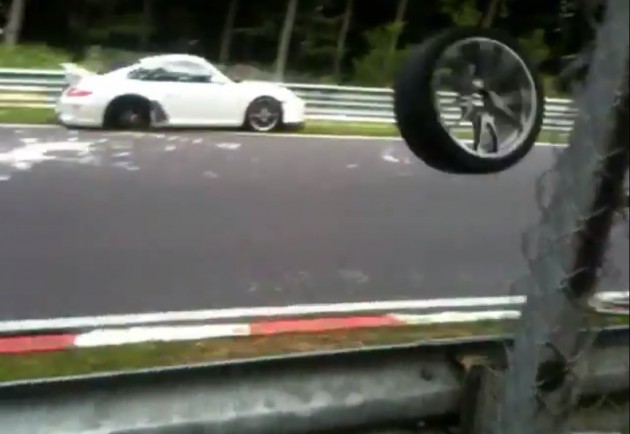 Crashes at the Nurburgring happen all the time. And sometimes, these happen at high-speed sections of the track. The Sprunghugel section is notorious for unweighting vehicles as they come tearing around the sweeping left-hander, dropping down very suddenly.

By the looks of this Porsche 911 GT3 RS crash though, it seems the driver lost control just before the corner, slamming into an earlier barrier. The speed of the crash is unknown, but judging by the distance the 911 skidded, there was a fair amount of momentum behind it all.

One of the rear wheels was torn off the hub completely, and was sent spearing down the track. Meanwhile, the brake disc was also detached. The front of the 911 appears to have suffered heavy damage, however, the rear looks much worse off.

The Porsche 911 GT3 RS comes with a roll cage system as standard and has been designed specifically for frequent track use. It’s lucky this happened in a well-sorted car rather than a more conventional one.

Click play below to take a look at the dramatic crash as it happened. You can begin to understand the speeds of the corner when watching earlier vehicles that fly past the camera.