If you do one thing today, you have to hear this Mercedes-Benz SLS AMG Black Series prototype crackling and popping on the Nurburgring during testing. It’s just pure V8 euphoria. 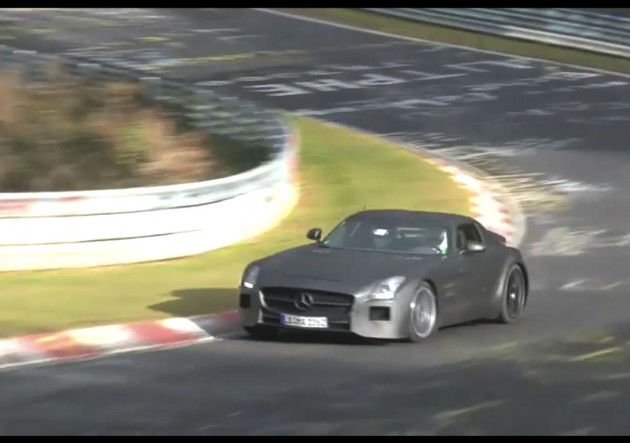 Mercedes-Benz’s AMG Black Series development division was recently seen testing a prototype of the upcoming Mercedes-Benz SLS AMG Black series on the Nurburgring. This is the faster, more focused version of the already epic SLS AMG.

In standard form, the SLS AMG uses a 6.2-litre naturally aspirated V8 developing 420kW of power and 650Nm of torque. The SLS AMG Black Series is expected to come with a revised engine producing around 450kW and 680Nm.

On top of the increases in engine performance, the Mercedes-Benz SLS AMG Black Series will also feature tract-focused sports – almost racing – suspension, a racing-inspired cockpit with bucket seats and some weight reduction, and a new fat and flared bodykit.

This latest video from Auto Motor und Sport in Germany proves previous reports were spot on, that AMG is indeed developing such a car.

Click play on the video below. The Nurburgring action starts at around the halfway mark. Lovely sounding V8 engine, wouldn’t you agree?