Following in the theme set by the world’s fastest couch last month, the latest episode of ‘Add A Motor To It’ features a 480hp V8 Chev bar stool. What will they think of next? 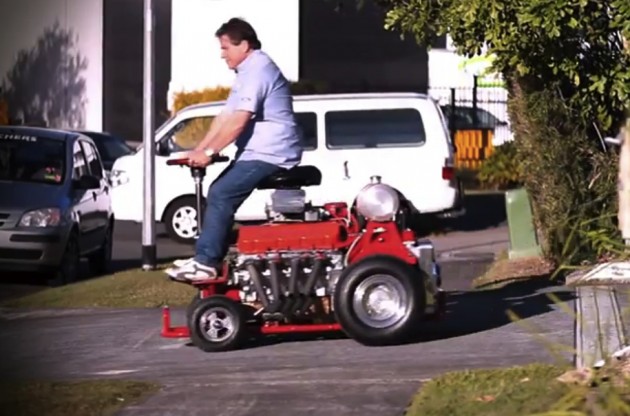 Kit Anderson is the man behind the 480hp V8 Chev bar stool who made it after he saw a similar concept in American. The bar stool features a bar stool seat with a custom frame and go-kart tyres, as well as a whopping 454ci big block Chevrolet V8 engine occupying most of the space required for the stool.

Anderson says the engine features an 850 double-pumper carburetor and a roller cam. He says it’s a ‘quite high-spec engine’ and one that is capable of towing around 900kg. Unfortunately, the 480hp V8 Chev bar stool only has a top speed of 35km/h, possibly for safety reasons.

Strangely not for safety reasons, the stool does not have any brakes. Instead, Anderson relies on the reduction gear used to send power to the wheels to slowly slow the contraption.

Do we see an upcoming record about to be broken though? Fastest bar stool in the world perhaps? Maybe one day Anderson will fit a longer ratio gear drive to it, and get someone crazy enough to pilot the thing.

Click play on the video below for the full episode and details. You can also head over to the official Add A Motor To It YouTube channel to check out other episodes.