Ferrari has been spotted testing a prototype version of what is believed to be a 2014 Ferrari California. The car, which gives off a distinct twin-turbo soundtrack, was testing on Ferrari’s Fiorano test track. 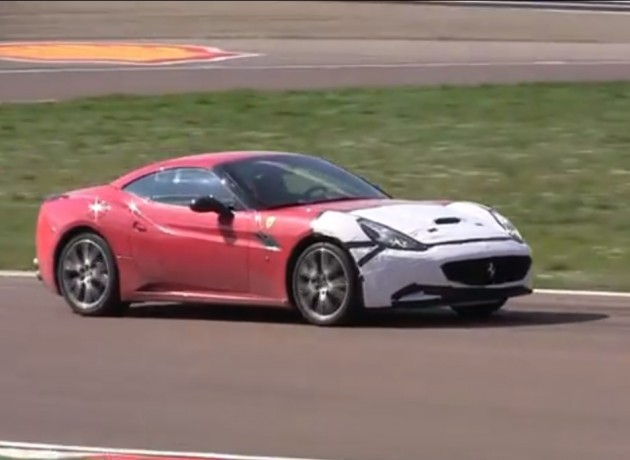 In a move which could help Ferrari reduce its overall emissions, turbochargers seem like they a starting to take over. Ferrari recently built a new range of twin-turbo V6 and V8 engines for Maserati. A spin-off of some kind is expected to power this upcoming California.

The engine could be based on the new 3.8-litre twin-turbo V8, which produces 390kW and 710Nm in the Quattroporte (arriving in Australia late-2013). The current California offers 338kW and 485Nm.

Despite an expected power boost, the new California is likely to be significantly more fuel efficient even if the 3.8-litre unit isn’t adopted. The current model uses an average of 13.1L/100km, while, in the more powerful Quattroporte at least, efficiency is rated at 11.8L/100km.

Judging by this prototype, spotted by Marchettino YouTube channel, the new model looks like it will come with a facelifted front end, potentially incorporating new air venting for an intercooler and some more modern headlight designs.

A full unveiling is expected to take place at the 2014 Geneva Motor Show next March, before hitting the markets later that year. Click play below for a bit of a taste.