Evo magazine in the UK has posted a very interesting in-depth video including an interview with Porsche GT car boss Andreas Preuninger. The car was only just unveiled at the Geneva Motor Show last week. 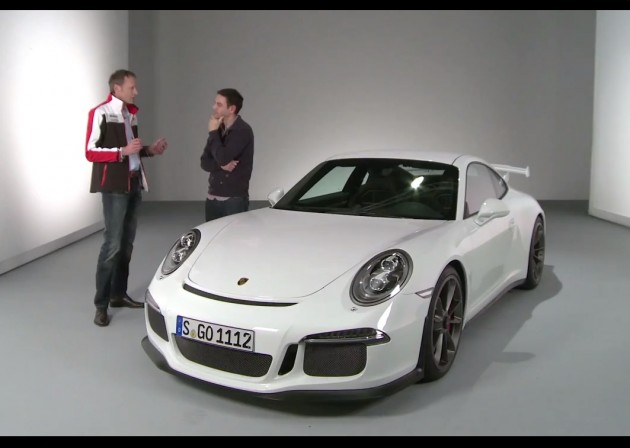 The 991 Porsche 911 GT3 is a significant and important model evolution in the 911’s family tree. It’s the first production 911 to rev to 9000rpm, it’s the first GT3 ever to come with an automatic-type transmission, the first 911 with rear-wheel steering, and the first Porsche to feature a ‘paddle neutral’ clutch operable by pulling both of the paddle shifters.

It’s also, as Preuninger says in the video below, the most driver-involved GT3 ever, even with the dual-clutch auto transmission. There’s so much attention to detail that has gone into it, and all in the name of precision, speed, efficiency, and driver enjoyment.

As a result, it’s the quickest and most powerful GT3 (0-100km/h in 3.5 seconds/350kW), the best handling thanks partly to an advanced rear-wheel steering mechanism, and the most fuel efficient and most efficient in terms of reach maximum speed as soon as technically possible.

If you’ve got a spare 20 minutes or so, and/or if you’re a 911 aficionado, this is one interview you’ll thoroughly enjoy. Like we did.

As previously reported, the new GT3 will arrive in Australia towards the end of this year. Local prices are yet to be announced.