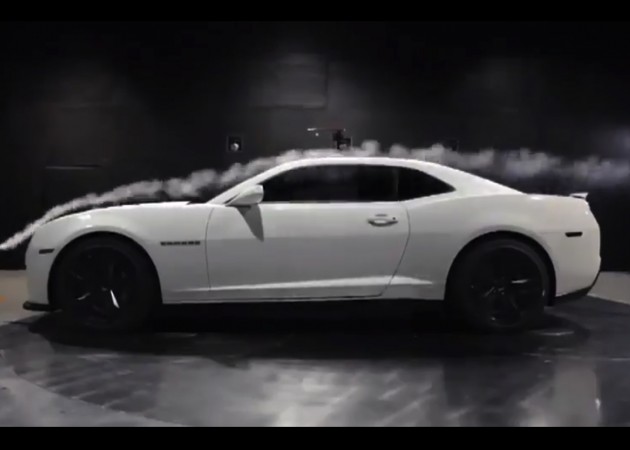 Compared with the normal Chevrolet Camaro, the ZL1 will feature several aerodynamic-enhancing revisions, such as a new lower lip spoiler at the front, a new front bumper bar with air ducting for the brakes and engine, and a heat extracting vent in the bonnet which helps to reduce lift.

Down the side, there’s a lip extension for the front wheels at the front corners which guides air out from the front wheels and brakes, and also helps to guide air to reduce overall lift. Attached to the sills are a pair of side skirts which help to reduce drag, and aid in sucking the ZL1 to the ground.

At the back, the 2012 Chevrolet Camaro ZL1 gets a lip spoiler, and a revised rear bumper bar incorporating a neat little diffuser. The entire underbody also features coverings to help reduce lift and suck the ZL1 to the tarmac.

The 2012 Chevrolet Camaro ZL1 is capable of producing 30kg of downforce at the equivalent of of 241km/h (testing conditions). It might not sound like much but it is compared with the normal Camaro SS, which actually produces 91kg of lift at the same speed. Al Oppenheiser, Camaro chief engineer, recently said,

“From the driver’s seat, the added downforce makes a huge change in the feel, and responsiveness of the ZL1 at high speeds. One of the best examples of how aerodynamics improved the performance of the ZL1 is the ‘Fuchsröhre,’ or Foxhole at the Nürburgring.

“In the ZL1, you can take that sweeping left-hand corner flat-out in fifth gear – nearly 160 mph (257 km/h). That’s a great testament to the confidence-inspiring stability and control the aerodynamic design helps give the Camaro ZL1.”

Perhaps one of the other critical points to the 2012 Chevrolet Camaro ZL1’s speed is the 6.2-litre supercharged V8. It develops 432kW of power and 754Nm of torque. Official accelerations times haven’t been revealed yet, but the anabolic Camaro ZL1 has lapped the Nurburgring in 7:41.27. Oppenheiser said,

“The Camaro ZL1 lapped the Nürburgring in an incredible 7:41.27 seconds, which would not have been possible without work of our aerodynamics team.

“The design of the ZL1 creates downforce like a race car, harnessing air pressure to press the tires against the track for extra grip and control at high speeds.”

Click play on the video below for an explanation behind the development of the aerodynamics package on the ZL1. It’s set to go on sale ‘later in 2012’.