The engine sound of a prototype 2012 991 Porsche 911 has recently been captured on film in Stuttgart, Germany. The new Porsche 911 was seen at a local service station wearing very little camouflaging, an interesting new brown colour scheme and a strange sunroof cover. 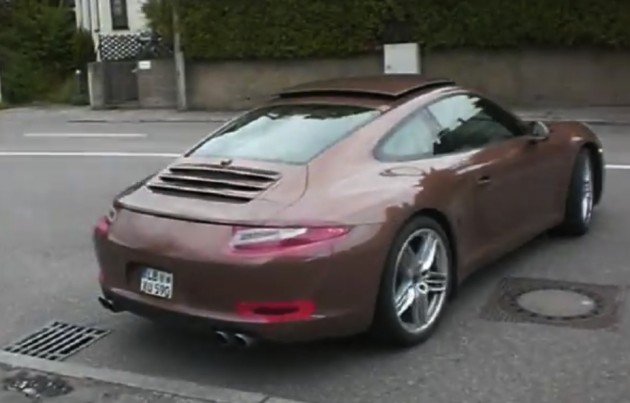 The test driver obviously didn’t want to give the enthusiastic cameramen any taste of the new flat six engine sound at full noise, but we do get a bit of a glimpse of the engine sound at idle and while accelerating up to speed.

The prototype 991 Porsche 911 does sound very raspy in the clip, especially just off idle. There’s a distinct harshness to it, keeping with the traditional 911 engine soundtrack. We can’t wait to see some full tests of the new model.

Stay tuned for our full coverage of the official 2012 991 Porsche 911 unveiling at the 2011 Frankfurt Motor Show, starting on September 13.

But before then, what do you think of the new brown colour? It has some taste to it, but it’s not really the most aggressive sports car colour. What do you think?