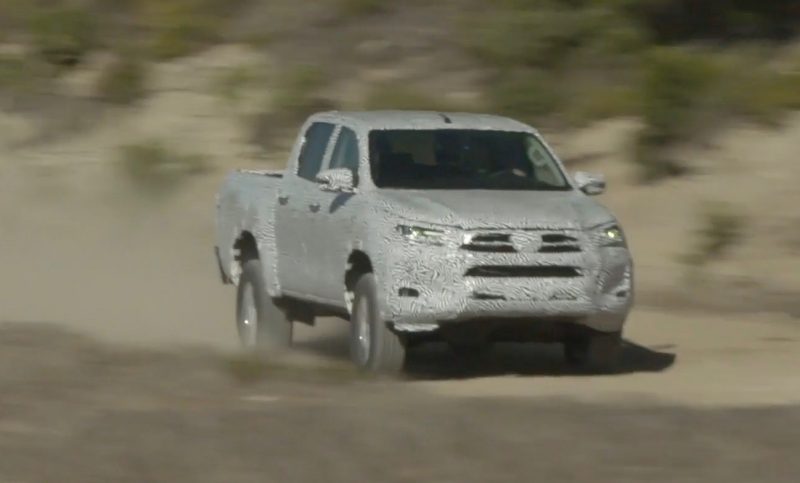 Toyota has sent out a teaser video of the highly-anticipated 2021 HiLux, showing a prototype being thrashed around on a rally stage with race car driver Fernando Alonso behind the wheel. The video was posted up onto Toyota Great Britain’s Vimeo account and it’s essentially a promo for Toyota’s campaign in the Dakar rally with a modified HiLux, with Alonso and co-driver Marc Coma. But the star of the show in this case is a prototype 2021 HiLux.

It is just a prototype model and it is wearing lots of disorientating camouflage, including over parts of the new-look headlights and front bumper bar, and much of the front grille. We’ve already seen leaked images of the new ute which reveal all (below). The design continues with a macho and strong theme, however, there’s a larger front grille and hexagonal surround, with fewer cross tiers running through the middle. Bolstered wheel arches remain, albeit more defined, and there are various trimming changes depending on the variant.

Perhaps the biggest news is that Alonso and Toyota provide confirmation of a new engine. It’s set to be a revised version of the current 2.8-litre turbo-diesel, which produces 130kW and 450Nm in the existing HiLux range. The power is expected to be lifted a bit, but the torque will probably be lifted more, to or beyond 500Nm. Alonso says:

“The new engine, the 2.8-litre, behaves amazingly well. Very powerful. Even if you push the car to the limit, the comfort is still there. So, yeah, I think the new HiLux can be invincible.” A statement handed out by Toyota Europe added: “The latest iteration of the world’s favourite pick-up will feature a new and powerful 2.8-litre powertrain and new suspension geometry to continue to uphold the nameplate’s reputation of legendary quality, durability and reliability.”

According to reports the new (updated) 2.8 unit might be used as the base engine in the upcoming 300 Series LandCruiser, at least in some specific market regions. The engine is also likely to feature in the facelifted Fortuner and any future Prado updates.

The new HiLux is expected to debut within the next few months, bringing not just powertrain and exterior revisions, but also some changes to the inside. An updated touch-screen media interface is a given, with Android Auto and Apple CarPlay coming in, while safety tech is set to be enhanced. Australian market arrival is likely to take place before the end of the year.