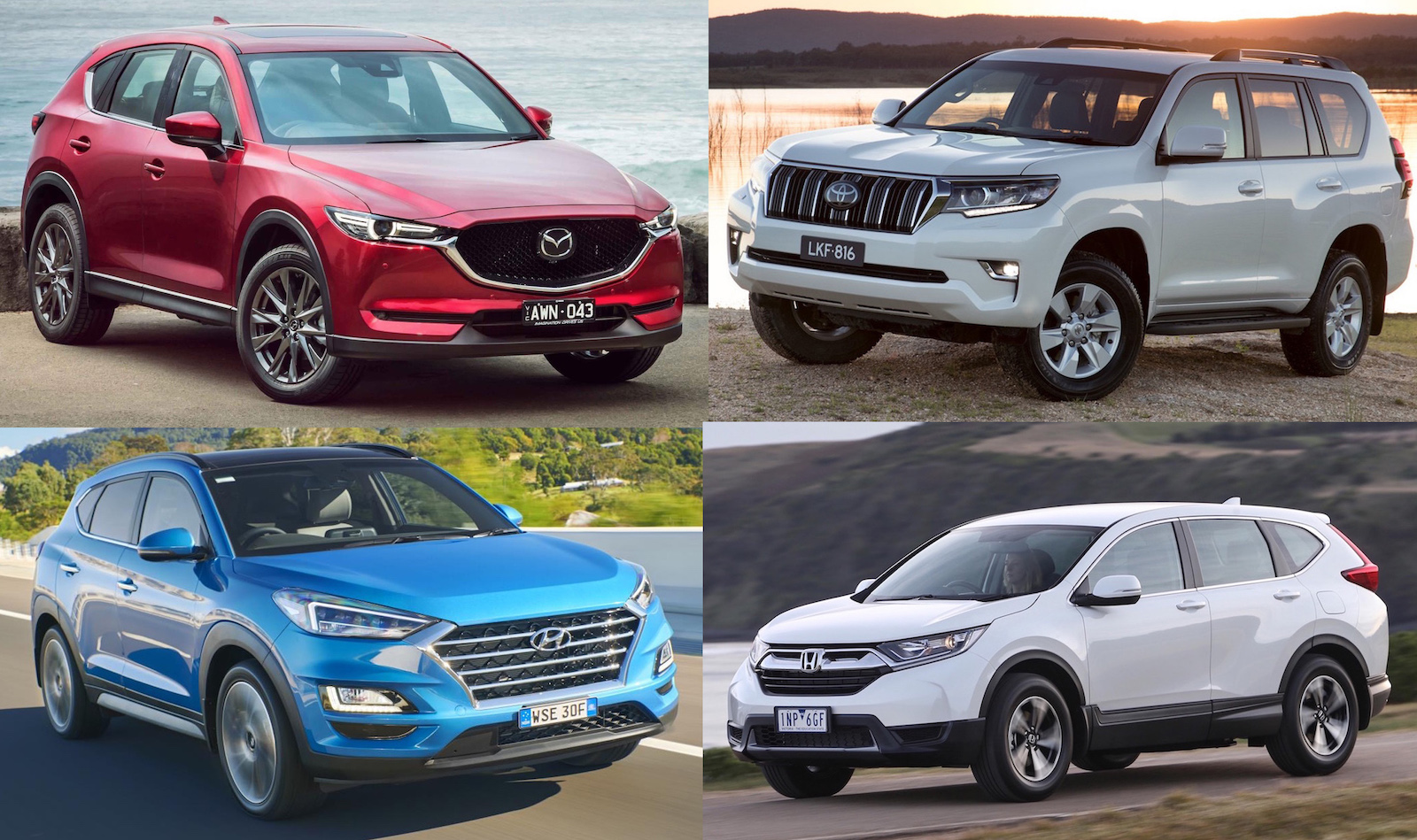 It goes so fast, doesn’t it? 2019 is done and dusted, and now we’re already into 2020. And as we found out with the December VFACTS report, utes and SUVs dominated the sales charts in Australia in 2019. In descending order, let’s take a closer look at the top 10 best-selling SUVs of 2019.

New vehicle sales in Australia, overall, are down 7.8 per cent year-to-date (YTD). But despite this, some models and even some segments reported increases, going against the market downturn. The ‘Small below $40K’ class saw a rise of 0.1 per cent, while the ‘Upper large below $100K’ reported an increase of 5.5 per cent. However, the most impressive spike was with the ‘Upper large above $100K’ segment, which jumped 37.5 per cent compared with 2018. This was no doubt helped by the introduction of some all-new models, such as the BMW X7 (608 units), the Audi Q8 (494 units), the Lamborghini Urus (77 units), and updates to the Nissan Patrol (1951 units).

The ‘Medium below $60K’ class was the most popular overall, as usual, with great products like the new Toyota RAV4, Mazda CX-5, and updated Nissan X-Trial and Hyundai Tucson contributing big numbers. Although, the class reported a 1.8 per cent drop in sales compared with 2018. Check out the top 10 best-selling SUVs in Australia in 2019 in the list below (our latest reviews for each respective model are linked in the titles): 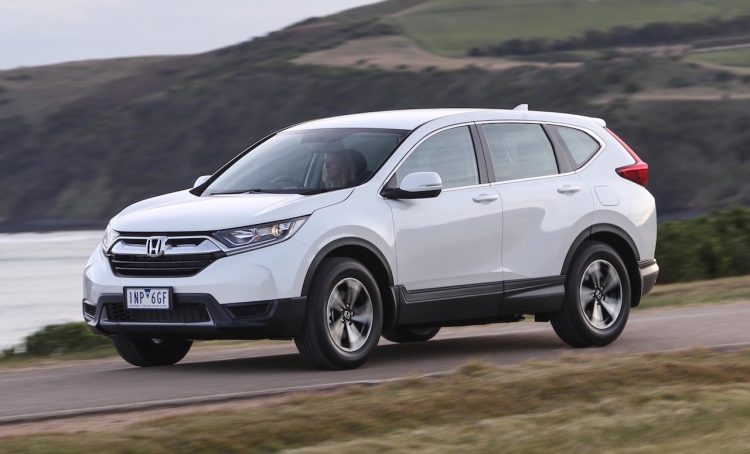 The CR-V has been on sale in its current form for a few years now, but it is still a very modern and practical product. In fact, we reckon it was one of the first of the modern SUVs to hit the scene. We’re talking about stuff link multiple USB ports for front and rear passengers, big storage boxes and pockets, a full-size spare wheel, and a big boot. The CR-V also helped kick off the turbo-petrol trend, with its 1.5-litre turbo four-cylinder. This unit not only offers respectable performance for its class, but also excellent real-world fuel economy. Another reason why we think it sits in this list is because Aussies love the comfortable ride, and availability of both two-wheel drive and all-wheel drive, as well as optional seven seats. Overall, it’s a very versatile and good value package. 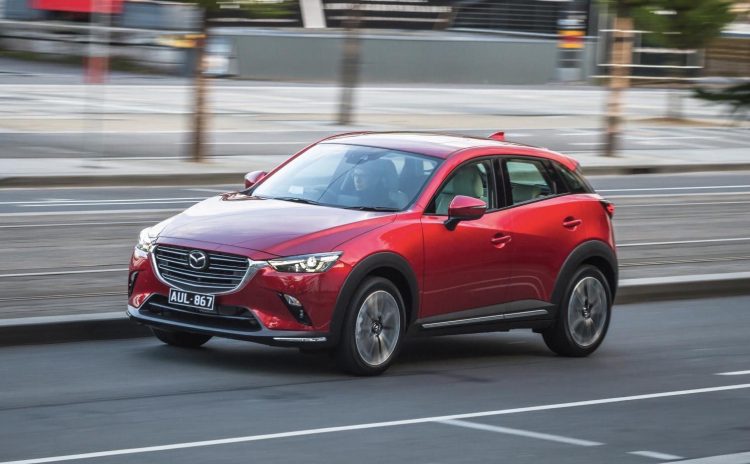 The CX-3 could be regarded as one of the pioneers of the idea of the ‘sporty’ compact SUV, with its sleek styling and hatch-like handling. Mazda Australia introduced an update for the model about a year ago, bringing in a new top-spec LE variant, as well as a 1.8-litre turbo-diesel engine option. Safety was also boosted thanks to Mazda’s i-ActiveSense technology suite. Even though it has been on sale in its current shape now since 2015, we think the main attraction for buyers is the excellent build quality, premium design inside and out, and the sporty driving dynamics. 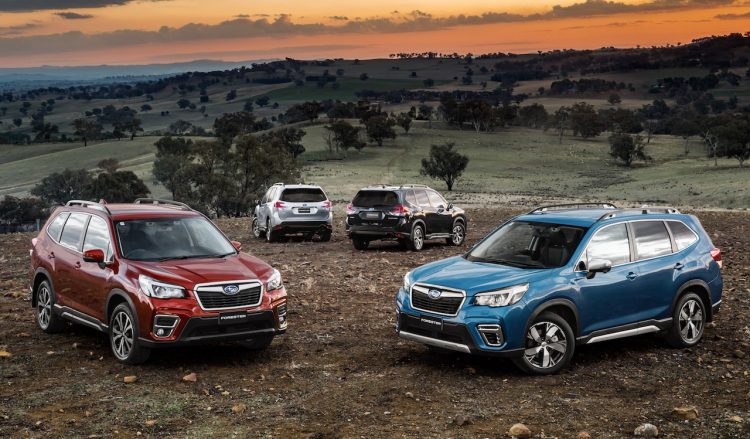 Subaru Australia introduced the all-new Forester in 2019. This has no doubt helped see a healthy increase in sales, jumping 21.4 per cent in 2019 compared with 2018. The new model switches to Subaru’s new global platform, which brings in big improvements to space efficiency, driving dynamics, and strength and safety. Technology is also significantly boosted, with a new touch-screen inside offering markedly updated functionality and capability. Of course, being a Subaru, all models are all-wheel drive. In our opinion, it is one of the most capable off-roaders in this segment. It’s a pity there is no more turbo variant to choose from, and it’s also somewhat a shame that only a CVT auto is available. 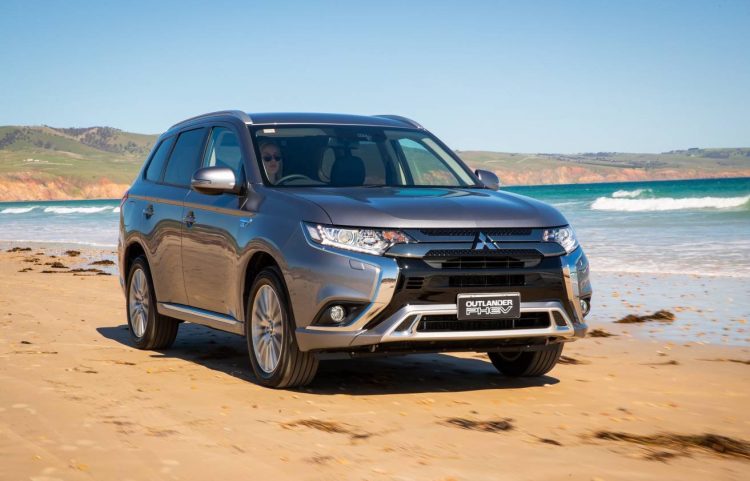 The Outlander has been around in its current, third generation form since 2013. We don’t know how Mitsubishi gets away with it, but it seems buyers love the no-fuss simplicity and practicality. The fact that it’s available with seven seats helps a lot too, considering only a handful in this mid-size class are offered with such capacity. There’s also an advanced hybrid option for buyers, helping to differentiate the Outlander from its rivals. Only recently did Toyota offer a hybrid for its rivalling RAV4. We suspect many others will follow this technological direction in the coming years. Interestingly, it doesn’t look like Outlander sales are going to fall any time soon, with its YTD figure going against the segment and market trend by rising 12.5 per cent compared with 2018 figures. 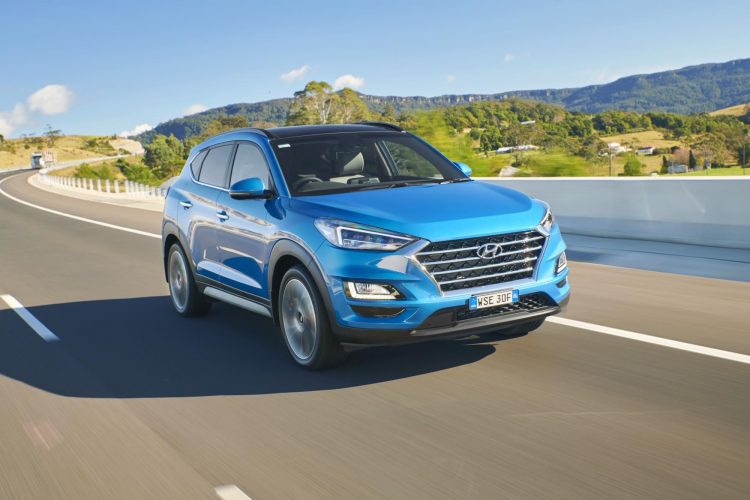 The Tucson is, in our view, one of the best all-rounders in the mid-size class. You can get it with a torquey turbo-diesel, a sporty turbo-petrol, or a budget-focused naturally aspirated petrol. Both 2WD and AWD are also on offer, and Hyundai, as usual, presents excellent packaging and features for the money. There’s also a five-year, unlimited kilometre warranty that some competitors have to contend with. Hyundai is set to launch a new model later this year, potentially bringing in hybrid power for the first time. With this we should also expect a new touch-screen media interface, like what was launched with the Kia Seltos in 2019. Some rumours suggest a high-performance N version might also be in the works, however, we think we’ll at least get an N-Line version like the latest i30 and upcoming Sonata N-Line. 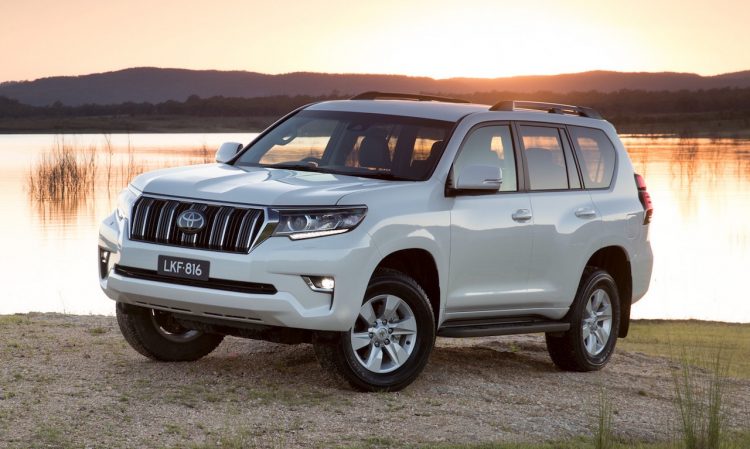 It’s almost part of the Australian landscape, the Prado. You only need to go for a drive into any rural area to see just how popular these machines are. Sure, they aren’t the most powerful large SUV out there, and the on-road driving dynamics are a bit clumsy. However, the Prado proves its worth with sheer dependability, practicality, user-friendliness, and utter competence when it comes to off-road conditions. The heavy-duty ladder-type chassis is shared with the HiLux, which was Australia’s best-selling vehicle outright in 2019, while the proper four-wheel drive system with high and low range means tough terrain is hardly an obstacle. Buyers have a decent variety of variants to choose from, however, all are powered by a 2.8-litre turbo-diesel four-cylinder engine that produces 130kW. 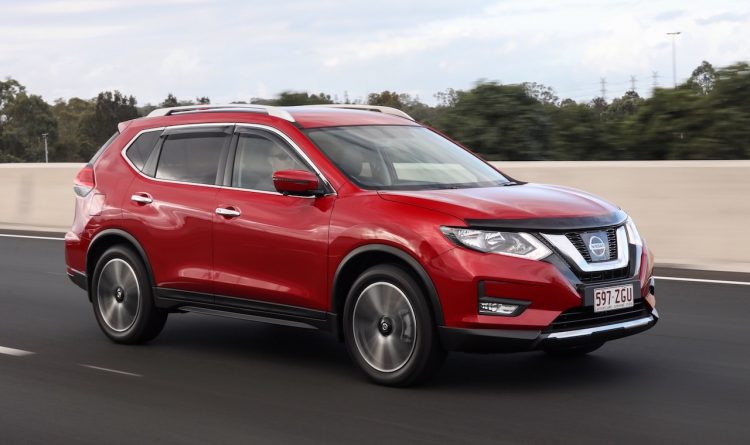 The X-Trail is arguably one of the first-ever SUVs. It was launched just after the RAV4, which pretty much kicked off the category of ‘sports utility’. When it was first launched in 2000, the X-Trail was fairly heavy-duty and quite capable off road. Now though, as market demands shift to on-road dynamics and comfort, the X-Trail has morphed into a very practical and user-friendly product that suits a wide range of buyers’ needs. Like the Mitsubishi Outlander, the X-Trail has been around in its current, third generation form since 2013. During 2019 Nissan Australia launched a sporty N-TREK edition, giving buyers the option of a slightly more exciting version. Like the vehicle that comes in third place below, we think the X-Trail is a little bland but it makes up for that with user-friendliness and a no-fuss lineup. 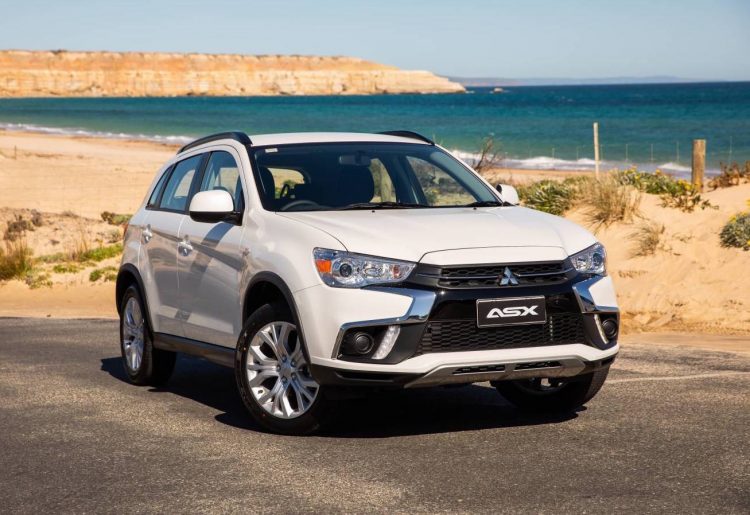 We don’t know how the ASX keeps pushing on and attracting so many buyers. In theory, it shouldn’t work. It’s been around in essentially the same form since 2010, featuring pretty much the same engine. However, most buyers in this segment demand practicality and space, and that’s what the ASX does best. It’s huge inside, for this class, and all of the controls and features are so easy to operate. Even the range is simple, with ES, LS and Exceed trim levels, and all are powered by a 2.0L petrol connected to front-wheel drive. Mitsubishi did introduce a mild facelift a bit over a year ago, which has no doubt helped perpetuate sales. In fact, sales are actually up an impressive 9.3 per cent compared with 2018 figures. 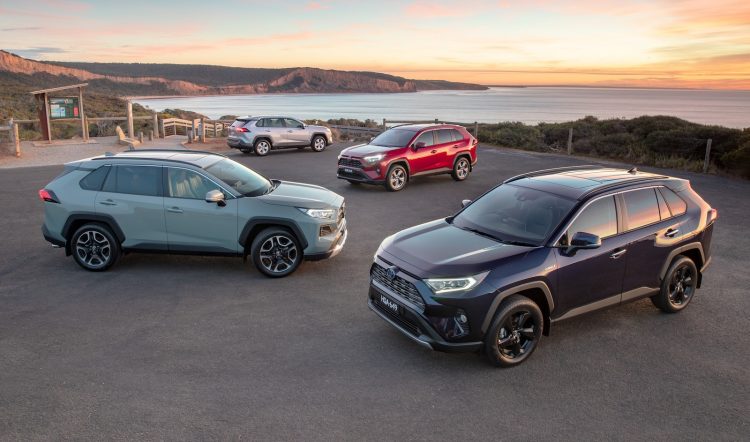 Unless Mazda does something big with the CX-5 we suspect that this time next year the RAV4 will sit in top position. The new model really is an awesome package. Of all the things we’ve said about various models above, the new RAV4 blends in almost all of the good bits of all models while introducing a fresh Toyota flavour. It is an irresistible package if you’re browsing in this particular space. A new hybrid option, which is available across the range, is both powerful enough yet extremely fuel efficient. There’s also a unique Edge variant that brings in a fresh eight-speed auto and a rugged-style personality. Sales are up 9.5 per cent, but we’re surprised the figure isn’t larger. In our opinion, it is one of the best vehicles to be launched in 2019, in terms of fit for purpose, value, and powertrain performance for its class. 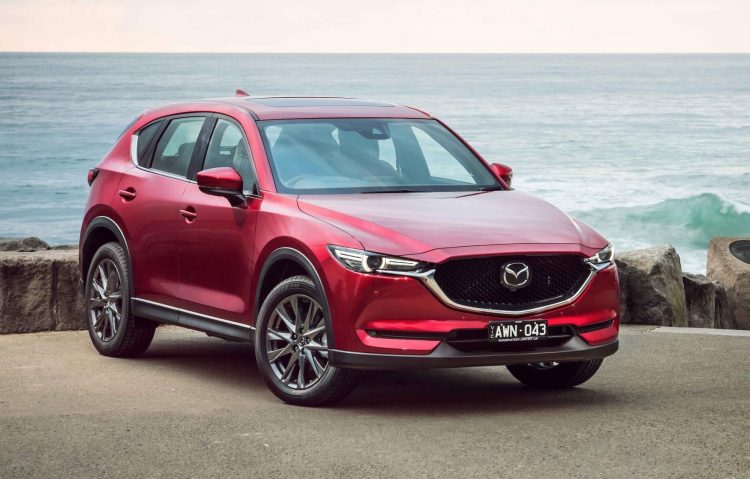 The CX-5 is enjoying its fifth year at the top of SUV sales in Australia. A string of updates along the way has definitely helped, including the introduction of a powerful 2.5-litre turbo-petrol option, an updated twin-turbo diesel, and enhancements to its already-advanced safety technology suite. We think buyers are most drawn in by the stylish design and the, quite frankly, beautiful interior (for this class). The natural and sporty driving position, lovely steering wheel, and excellent MZD Connect media interface with its convenient hand controller help set the standards for this class in our opinion. As mentioned in the RAV4 section though, we think Mazda will need to do something special for the CX-5 going forward to keep the rivals away. Sales are down 2.4 per cent, which could be a sign of change on the horizon for the favourite. 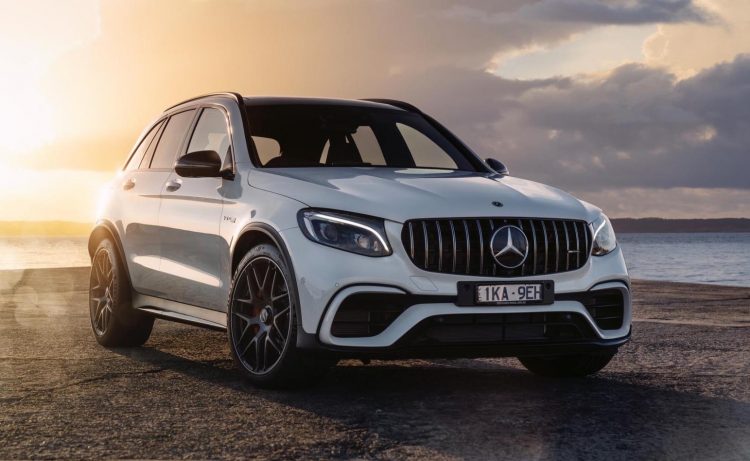 In the premium sector the Mercedes-Benz GLC dominated the charts, however, it looks like BMW and Volvo were generally more popular, topping more segments. Compared with the first half of 2019, the Lexus NX jumped in front of the Volvo XC60 for fifth place, while the Range Rover Sport dropped from eighth to tenth. The BMW X1 also moved from tenth the eighth. See below for the full list (our reviews are linked in the titles, where available).