German Porsche tuning specialist TechART has revealed an image and details of the new TechART GTStreet RS, based on the Porsche 911 GT2 RS. The tuning package will be on unveiled at the 2011 IAA Frankfurt Motor Show next week. 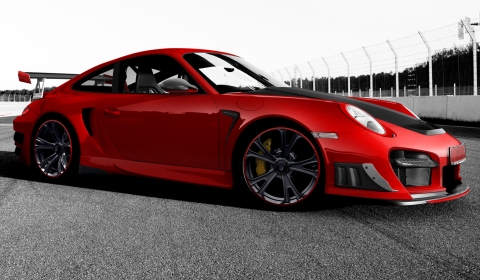 The TechART GTStreet RS features a complete overhaul both cosmetically and mechanically, including a bespoke front bumper bar and front splitter arrangement, and an adjustable lower chin spoiler and air intakes for the front brakes and for the radiator.

At the rear, there’s an aggressive carbon fibre diffuser and a full carbon fibre rear wing for added downforce. The rear guards and engine cover are also revised to provide additional air intakes for the engine and for the intercooler.

Under the engine cover sits TechART’s most powerful tuning package yet. The TechART GTStreet uses a tuned version of the 3.8-litre twin-turbo flat six from the Porsche 911 GT2 RS, only instead of outputting 456kW, it now offers 520kW of power and 900Nm of torque.

TechART says the TechART GTStreet RS is capable of cracking the 0-100km/h sprint in just 3.3 seconds and going to a top speed of 352km/h. TechART also says acceleration from 0-200km/h is achievable in just 9.5 seconds – keep in mind this is all using the original rear-wheel drive layout.

Other highlights include a set of 20-inch Formula Race forged lightweight center-lock rims measuring 8.5 x 20 inch on the front and 12 x 20 inch on the rear. A range of interior trim options will be available as well as a nose-raise kit which raises the front suspension for high bumps and driveways.

TechART will have the GTStreet RS on display at next week’s Frankfurt show which starts on September 13, along with other tuned Porsche TechART models. We’ll keep you updated with more images and details as soon as they are released.