When it comes to making styling tweaks, and even engine tweaks, to Porsche 911s, TechArt is up there amongst the most elite. The German company has released details of its latest package for the 991 Porsche 911 Carrera 4S. 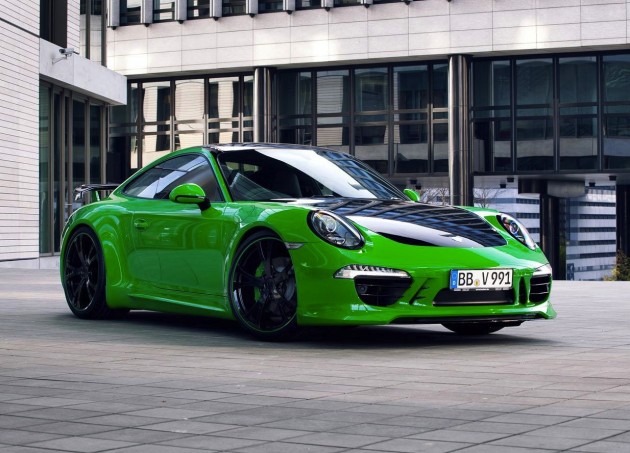 The bright green paint is probably enough to have keen onlookers rubbernecking as it drives past. Not stopping at that though, TechArt has developed a comprehensive aerodynamics package to boost visual appeal and to help the 911 cut through the air.

At the front there’s a low and sharp spoiler system and a completely new bumper bar. There’s also a trio of black intake grilles which match a black-painted bonnet and roof.

Moving around to the back you’ll spot the new large rear spoiler with the wing plane in black. It features a secondary ‘ducktail’ wing just underneath for additional downforce and style. 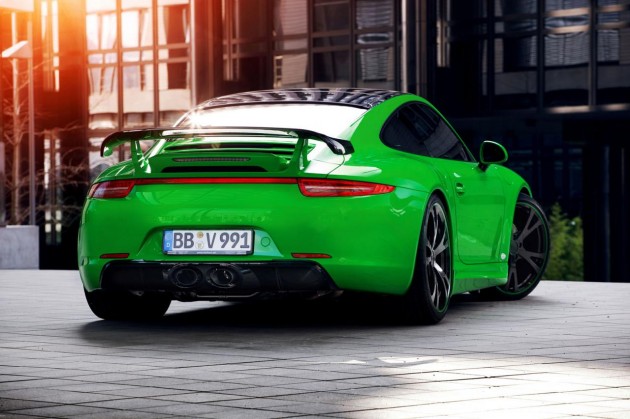 The back also gets a chunky black diffuser section at the bottom and a new twin-outlet racing exhaust system. The exhaust comes with its own valve which can be controlled from the cabin, providing either a loud barking soundtrack or a slightly softer raspy note.

TechArt hasn’t mentioned any engine modifications, however, vast interior revisions can be optioned including a colour-coded trim, a bespoke TechArt three-spoke steering wheel, and contrasting stitching throughout.

To finish it all off the new package comes with staggered 20- and 21-inch dark alloy wheels. These give the 911 that perfect sinister look.

TechArt parts can be bought in Australia through RamSpeed in Sydney and Queensland.