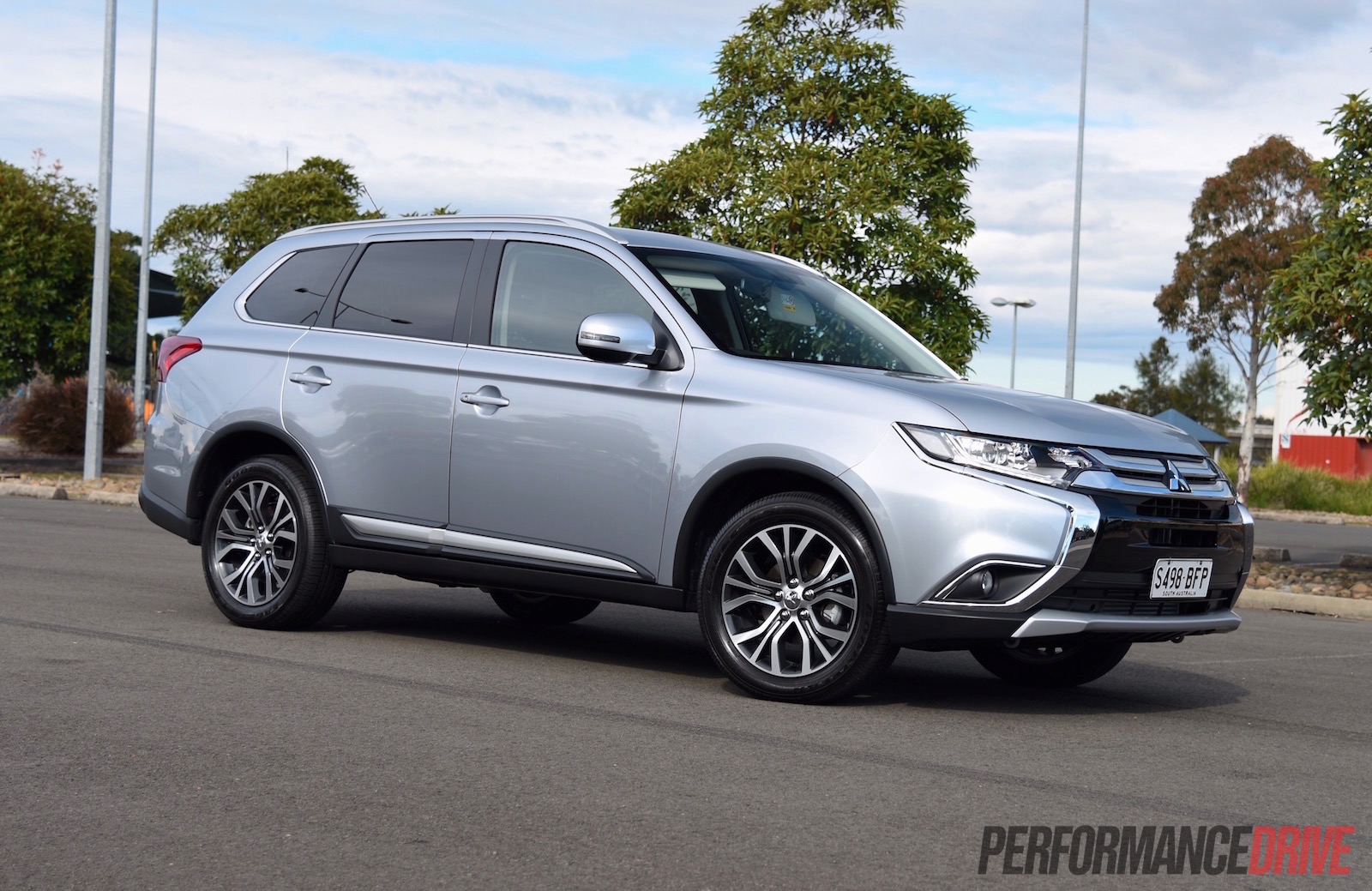 Should you buy a 2016 Mitsubishi Outlander XLS ? And, should you go for the diesel? We’ve just lived with one for a week to try and come up with some answers for you before you go out and disrupt your finances. 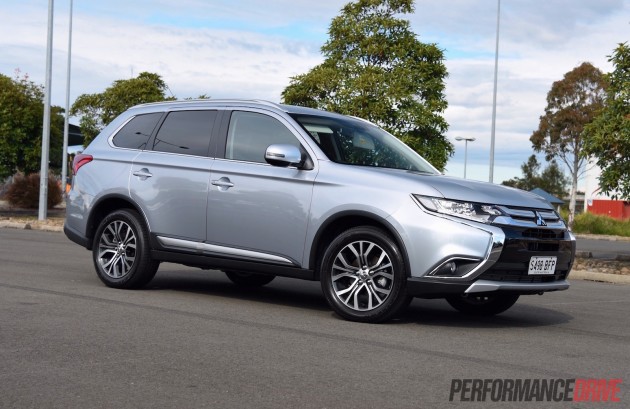 The seven-seat SUV market is rapidly becoming one of the most demanding segments in Australia. It’s not just a market made up of heavy-duty ute-based models anymore, often featuring a crude and old-fashioned platform best suited for farming. The Mitsubishi Outlander sets out to prove you don’t have to sacrifice anything to get seven seats.

There are eight different variants of the MY16 Outlander on the market, in LS, XLS, and Exceed trim. The first three are two-wheel drive and come with a 2.0-litre petrol four-cylinder producing 110kW and 190Nm, available in LS manual and auto, and XLS auto guise. If you want seven seats, you have to step up to at least the XLS. All seven-seat models are all-wheel drive automatics, and you can select between a 2.4-litre petrol with a CVT or 2.2-litre turbo-diesel with a conventional six-speed auto (actually a 2.3-litre – 2268cc).

Mitsubishi launched the new-look 2016 Outlander in April this year. It is supposedly a re-engineered model from bumper to bumper, according to the company. However, it is fairly obvious the gist of it is a design refresh with new bumper bars and lights. That is, until you take it for a drive.

In our opinion the Outlander has always been a decent proposition in the mid-size SUV segment. It offers pure and simple practicality, strong underpinnings, and a relatively heavy-duty powertrain that is suitable for actual off-roading and not only picking the kids up from soccer.

However, the Outlander is a bit basic and hollow, with unrefined powertrains and sub-standard on-road handling. Mitsubishi says it has addresses these concerns by implementing at least 39 revisions to the body, chassis and suspension. There’s a modified engine intake system, improved door seals, recalibrated steering, damper revisions, and altered suspension mounts. All of this has been done in the aim to reduce noise and vibration and to make the vehicle an overall quieter and more pleasant drive. Have the changes worked? 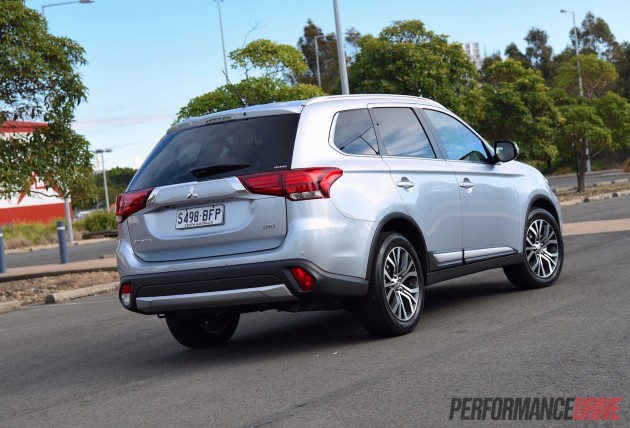 Out on the road the MY16 version is undoubtedly quieter, with lower road noise and a subdued engine note for the diesel. It does feel more refined, yes. We wouldn’t call it class-leading in terms of handling and chassis dynamics, but it is more agile and more stable in the corners. It also feels more confident turning in than the predecessor, presenting minimal body roll. As we stated in the launch review though, the tradeoff is a slightly firmer ride. But if you compare it to a European SUV of this size, the ride is completely acceptable.

Regardless of the handling. If you’re in the market for a seven-seat SUV, chances are, you couldn’t give two hoots about handling. That’s where the Outlander really steps in. It is a vehicle that knows its market and knows what its customers want. So in saying that, we think you should go for the diesel option. The 2.4-litre naturally aspirated petrol unit is unchanged for the MY16 update, like the diesel, but economy has been improved from 7.5L/100km to 7.2L/100km.

For the diesel, official economy actually rises from 5.8L/100km to 6.2L/100km. However, the figure is much more attainable in real-world conditions compared with the petrol. During our test, we averaged around 7.0L/100km. For a seven-seat vehicle this is excellent economy. In the petrol version you can expect mid to high 8s, if you’re gentle.

Performance is also better in the diesel than in the petrol. The petrol might produce 124kW against the diesel’s 110kW, but due to its low 220Nm torque output and the CVT automatic, the 360Nm diesel feels quicker and offers better roll-on acceleration. We tested 0-100km/h in this MY16 diesel in 9.2 seconds. We have also tested 9.0 seconds in the slightly lighter weight 2.4 petrol; in other words, there isn’t much in it (see videos below). The diesel version gets a more direct and more enthusiastic conventional six-speed automatic, as mentioned, which we think significantly lifts overall cross country ability and driving enjoyment. 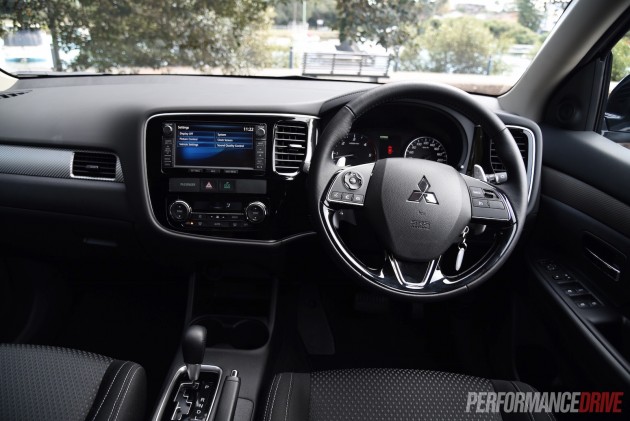 The other main area you’ll be interested in is the practicality of the cabin and its features. The Outlander remains a somewhat basic proposition. But on the same note, this can be a good thing. A very good thing. Have you ever jumped into a vehicle and just been overwhelmed by the assortment of buttons and futuristic shapes and colours? It can have a profoundly negative impact on your mood.

With the Outlander, this isn’t likely to happen. You can jump in and immediately feel at home with the controls and humbled by the decor and layout. The seating position is perfect for this type of vehicle too, giving you a slightly perched up view of the outside surroundings. It’s not too high, which can make it difficult to negotiate the exact proportions of the body during parking and in tight spaces, but it is high enough to boost your confidence.

Seating space is really impressive for the Outlander’s size. The front row is, as you would expect, very accommodating with ample head and legroom. A low centre console and unobtrusive dash frees up space. The second row is one of the largest we’ve seen in this segment. Legroom in particular is first class. It can seem a bit narrow, the rear bench, but fortunately the seat features hardly any contour so you aren’t left forced into a socket. As a bonus, the second row can be adjusted for slide and recline. Third row seating is tight and really only suitable for children or very small people. This makes it ideal for families… or those who have a group of very small friends. 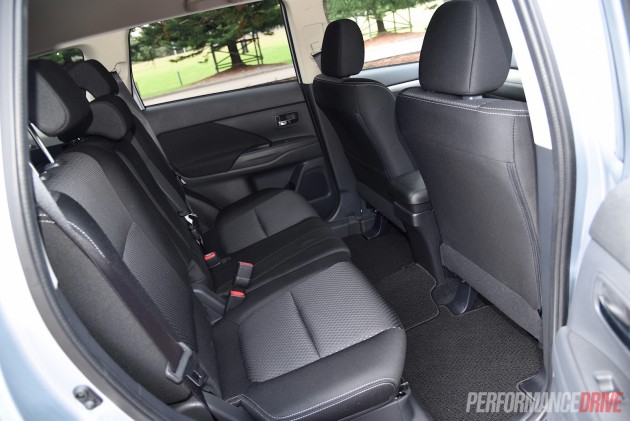 Cargo capacity depends on the seating layout, spanning from 128 litres with all three rows up, to 477L with the third row down, to 1608L with both the second and third row down. Interestingly, the maximum capacity is the same as the five-seat maximum capacity. This gives you some indication of how efficiently the 50:50 split-fold third row can be stowed away. Compared with the direct seven-seat market rivals, in which case there is only the Nissan X-Trail seven-seater (according to VFACTS: ‘SUV medium below $60,000’ segment) – offering 135L/550L/1520L – the Outlander shapes up pretty good.

It terms of standard features, the XLS comes with all of the modern conveniences you might be looking for in a mid-size SUV. You get dual-zone climate control, auto headlights and wipers, heated and electric folding side mirrors, privacy glass, 18-inch alloy wheels with reasonably tall tyres suitable for off-roading, and a 7.0-inch touch-screen interface with sat-nav. The interface also bundles in digital radio, which is a superb feature if you live near a capital city. It also comes with enough safety depositary to attain a five-star ANCAP safety rating, recently scoring 35.58 out of 37 in crash tests.

As tested, the XLS diesel starts at $39,490. It is a lot of money to fork out. When you stack it up against the rivals, even some of the larger seven-seat SUVs that offer fewer luxuries, the Mitsubishi does represent a high level of value. 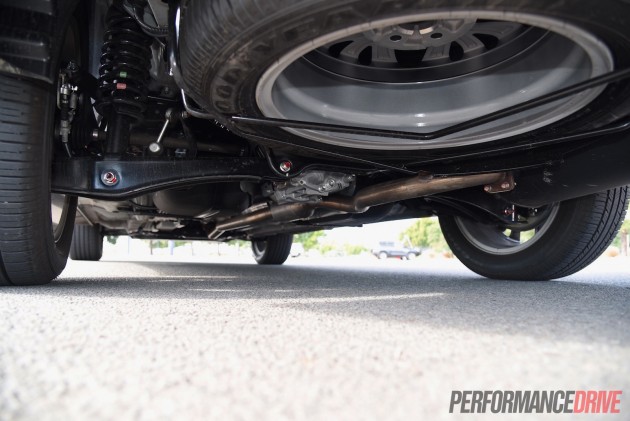 Aside from being one of only two seven-seaters in this class right now, the Outlander is a great choice because it is just such an easy vehicle to drive and live with. It’s also covered by Mitsubishi’s renowned five-year/100,000km warranty for peace of mind, and comes with four years capped-price servicing. To answer the original question then, yes. If you’re looking into the seven-seat SUV market, we see no reason why you shouldn’t buy a MY16 Outlander.

The main areas that might cause you to reconsider are the size, as there are larger yet more expensive seven-seat options around, and perhaps the resale value. We’d suggest going for a higher grade variant if you can as this will help distinguish your vehicle from the rest on the secondhand market. We’d also suggest going for the diesel.

2016 Mitsubishi Outlander XLS DiD – THE SPECS