It’s not everyday that a very prominent automotive executive addresses a large group of students during a commencement ceremony. Sergio Marchionne, however, did just that last weekend. 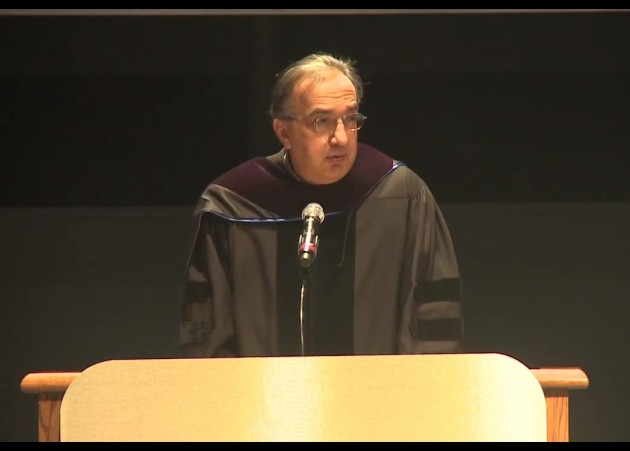 If you haven’t heard of Marchionne, he is the current chairman and CEO of Chrysler Group, and CEO of Fiat S.p.A of which owns Ferrari and Maserati. He’s also the chairman of Fiat Industrial. He’s one of those truly great once-in-a-lifetime men in other words that has achieved more than what most of us would ever think is possible.

Some life achievements include a degree in law, economics, business administration, and commerce, and he’s been the CEO of no less than five different very large companies over the years. He’s also responsible for rescuing Chrysler from bankruptcy and turning it into a profitable company.

He’s known for his hands-on managing approach, and apparently prefers to talk in person to colleagues rather than through secretaries and hierarchies. He’s also known for his modest character and personality, and even has his office on the fourth floor in the Chrysler building – sharing it with the engineering department – rather than selecting the top penthouse, which is apparently vacant.

His inspirational speech last weekend was to around 2000 students and staff at Walsh College in the US, which is known to be one of Michigan’s biggest graduate business schools. Some words he said included,

“I constantly encourage my co-workers at Fiat and Chrysler to go beyond the cliche and the convention, to try new approaches and change perspective each and every day. I exhort them not to repeat the same things, the same approaches and I remind that they are indeed free. The freedom I’m talking about is something inside you.”

Click play on the video below to hear some of the highlights. You find yourself having an epiphany and wanting to take on an endeavour of some kind after hearing his words.