Dick Johnson is well known for his love of fast V8 Fords, not quirky front-wheel drive French cars with roofs that fold up. The neat little 2CV you see here is in fact owned by Dick’s wife Julianne, however they’ve decided that after seven years of ownership it’s time for ‘Tootsie’ to find a new home. 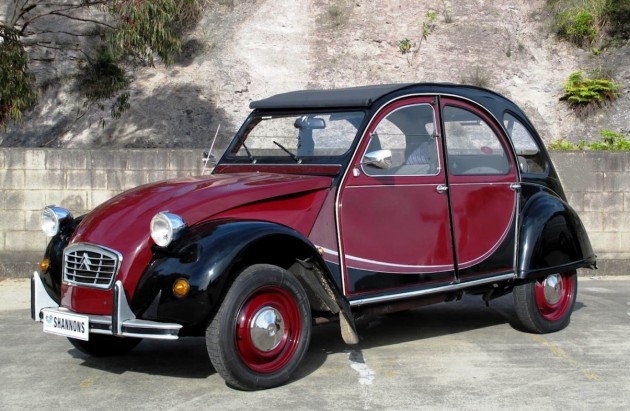 The black and maroon 1984 Citroen 2CV Charleston is going up for auction at the upcoming Shannons Late Spring Classic Auction in Sydney on November 17.

If you’re wondering how much this little Citroen will fetch, it’s expected to attract somewhere between $14,000 and $18,000. Given Dick’s strong following in the car scene, don’t be surprised if it sells for a lot more. It is however a long cry from the $40,000 someone paid for a low-kilometre 2CV Charleston at an Australian auction in 2010.

Julianne’s 2CV was originally owned by actress Trudie Goodwin, best known for her role as Sergeant June Ackland in the British cop show The Bill. Prior to that the car was owned by Trudie’s mother.

Since acquiring the car, Dick and his wife have only clocked up a measly 2400km. Dick commented,

“Julianne always loved 2CVs, so when we saw this one for sale we had to have her.

“They say ‘happy wife, happy life’, but I’ve also become very fond of Tootsie too. It will be like saying goodbye to a member of the family, but since we’ve downsized to a unit we have run out of car spaces.

“With its loping, long-travel suspension it’s about as far away from a V8 Supercar as you can get, but as it was designed to cope with French cobblestones it is perfectly at home on Queensland roads! She’s still like new – she looks as good today as any 30 year old!”

If you’re keen to get your hands on Dick’s wife’s 2CV, head over to Shannons for more information.

All-new 2021 Toyota Kluger on sale in Australia in June