As reported last year, Hollywood producer Ron Howard is working on a new film called Rush, which will capture the scene of the 1976 F1 Grand Prix, and the life of legendary F1 racer, Niki Lauda. 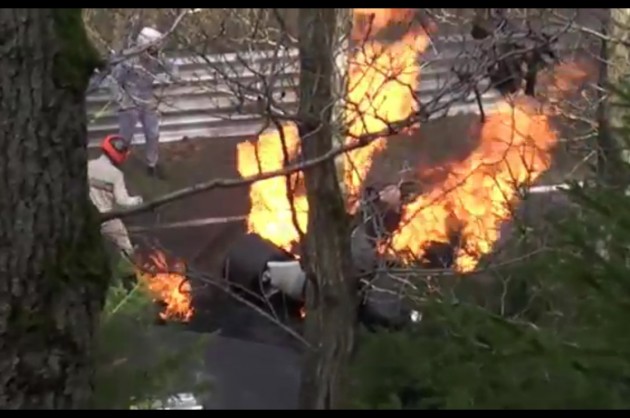 During the 1976 Nurburgring F1 GP, one of the most famous accidents in F1 history occurred involving Niki Lauda and Brett Lunger. The accident saw Lauda bounce off the guard rail near Bergwerk, setting his Ferrari alight. Lunger then punted into the side of stranded Lauda.

Making matters worse, marshals and fire crew weren’t able to attend to the crash in decent time due to the nature of the circuit, which meant Lauda was stuck in his car. He suffered serious burns to his face.

From that year on, the Nurburgring was deleted from the F1 calendar. Lauda himself wasn’t too keen on the idea of racing at the ‘Ring in the first place, and even tried to boycott the event due to the potential dangers he could see. He organised the unsuccessful boycott despite being the first driver ever to post a lap time in under seven minutes (6:58.6) the year beforehand.

Some very interesting footage has just surfaced, capturing what appears to be filming of the new Rush movie. It looks like the scene involving Lauda’s famous and horrific crash at the Nurburgring. According to the YouTube description, the person with the camera was simply out walking his dog alongside the ‘Ring and stumbled across the scene in the background.

Take a look below. The movie even incorporates the classic Porsche 911 safety car of back in the day.

The film is set to hit cinemas some time next year.