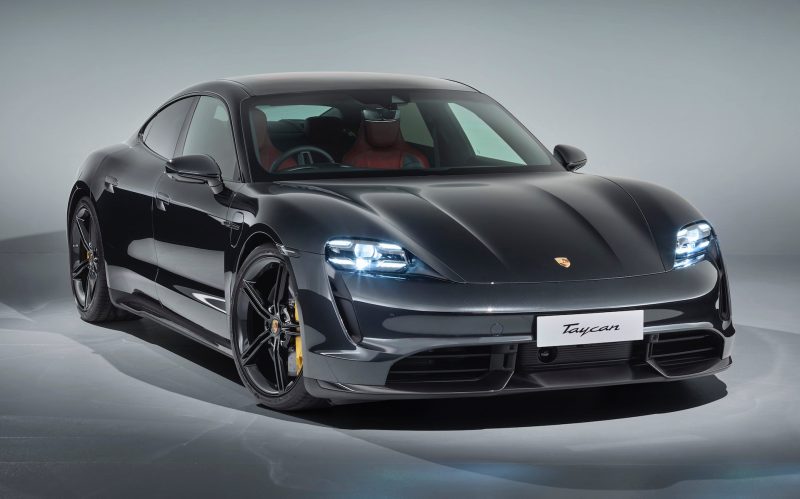 The epic new Porsche Taycan is now available to order in Australia, with the first examples already landing ahead of customer deliveries commencing in December. Three variants are confirmed for the local market, spanning from the Taycan 4S, Taycan Turbo, and Taycan Turbo S. All feature a fully electric powertrain with four-wheel drive, and a permanent magnet synchronous motor for the front and rear axle and a two-speed transmission for the rear axle.

Kicking off the range, the 4S features a 79.2kWh battery pack. Peak power is rated at 320kW, or 360kW with the optional 93.4kWh Performance Battery Plus. Peak torque is 640Nm and 650Nm, respectively. An overboost function sees outputs increase to 390kW, and 420kW with the Plus battery. Acceleration from 0-100km/h is rated at a claimed 4.0 seconds in standard trim.

Moving up to the Turbo gets you the 93.4kWh battery as standard, only it comes with its own Performance Plus technology. It helps the electric motors produce 460kW, and 500kW during overboost. Peak torque is rated at 850Nm. Acceleration across 0-100km/h takes a claimed 3.2 seconds. At the top of the range, the Turbo S features a similar system as the Turbo only during overboost it can deliver up to 560kW. Peak torque is also a whopping 1050Nm. It can conquer the 0-100km/h sprint in just 2.8 seconds.

As for the full-charge ranges, the 4S is rated at 365km in standard trim, or 414km with the Performance Plus battery. Going for the Turbo increases that to 420km, while the Turbo S is rated at 405km.

When it comes time to recharge, the 800-volt system (a first for an electric production vehicle) can be recharged at up to 270kW. Australian models come with what’s called a Mobile Charger Connect as standard, as well as a Charging Cable (model 3) to use with public stations. For charging at 400V points, a 150kW DC charger comes as standard as well.

Porsche Australia has partnered with Chargefox, which is the country’s largest charging network operator. Owners receive a complimentary three-year subscription to use Chargefox’s Ultra-Rapid DC network (at up to 350kW), as well as the standard Fast DC network (50kW). In terms of standard features, all three models in Australia come with a 16.8-inch curved instrument cluster screen as well as two central touch-screens for the on-board media, climate, and vehicle settings. Apple CarPlay is standard, along with digital radio, and a 14-speaker Bose sound system. Dual-zone climate control is featured on the 4S, while the Turbo and Turbo S come with four-zone climate.

Buyers can of course option for a range of bonus luxuries and exclusive features, such a matt carbon interior package, two-tone leather-free upholstery, and 21-inch alloy wheels (standard on the Turbo S).

The Porsche Taycan is covered by a three-year/unlimited kilometre warranty in Australia, a 12-year rust warranty, an eight-year/160,000km battery warranty, while servicing intervals are one year/15,000km (whichever comes first). Interested buyers can place an order now, with the first Aussie deliveries set to commence in December. See below for the starting prices (excludes on-road costs):