Here we have what could very well be the first Porsche 911 GT3 RS 4.0 crash to be recorded. The special model is one of just 600 built, featuring a 4.0-litre engine as opposed to the normal 3.8-litre unit. 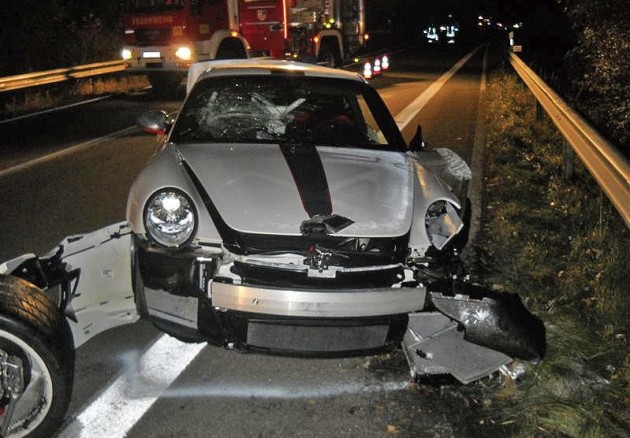 It’s always sad to see automotive exotica carnage like this, but sometimes it’s just something we all have to face: most rich people cannot drive. Actually, that’s a bit harsh, as the owner behind this Porsche 911 GT3 RS 4.0 crash was actually subjected, allegedly, to a motorist who thought it was a good idea to drive around drunk.

According to an input-aktuell report in Germany, the Porsche 911 GT3 RS 4.0 crash occurred in south Germany fairly close to the Nurburgring. It involved another Porsche 911 GT3 (non-4.0 model) and a possible idiot driving a Chevrolet Cruze.

The Cruze apparently had a head-on collision with one of the GT3s and then ended up down the side of a ditch after ricocheting off the second GT3. Fortunately, nobody was injured in the accident.

By the looks of the aftermath of the Porsche 911 GT3 RS 4.0 crash, the front end suffered some moderate yet nasty damage. Interestingly, the crash left the shiny silver intrusion beam at the front in seemingly pristine condition, while the bonnet and windscreen suffered.