An unfortunate Nissan GT-R and its owner have been involved in a nasty car crash that left the two sitting submerged in a small ditch/creek. This is the second time this week a highly desirable sports car has been crashed into some water (see a Ferrari Enzo crash into water here). 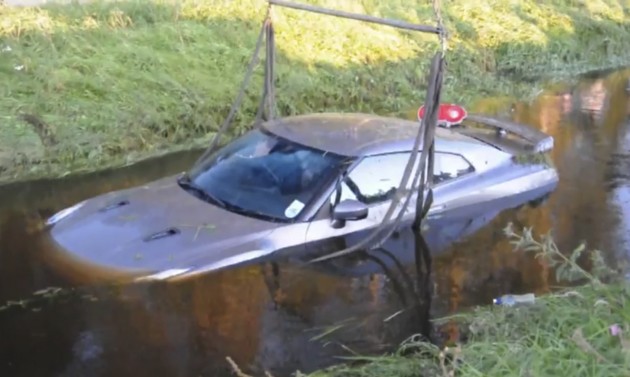 The Nissan GT-R owner was attending the ADAC Masters in the Netherlands at the TT circuit. Upon leaving the event, too much enthusiasm was obviously pumping through the owner’s body, and things got a little out of hand. The Nissan GT-R crashed into a bridge structure and then spun into the small creek.

As you can see in the video below, the Nissan GT-R is completely inundated with water from the manmade creek, flooding the entire interior. This would be a costly fix to get the poor GT-R up and running again, as flood damage usually saturates all components including electrical hardware which can’t be repaired, only replaced.

Click play on the video below to watch the Nissan GT-R crash result being pulled from the water.