Nismo has unveiled its Nismo Nissan LEAF Concept at the 2011 Tokyo Motor Show. This is a performance version of the otherwise strictly economy-focused all-electric LEAF. 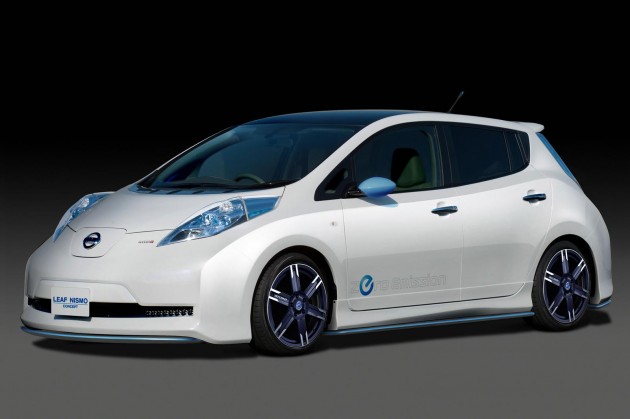 Who said electric cars have to be boring? Nissan’s performance division has taken its hands to Nissan’s most environmentally-friendly model and given it a bit of spice to excite things up a notch.

Nismo hasn’t touched the all-electric powertrain for its performance tune, instead, the company chose to improve the LEAF’s aerodynamics and give it a more aggressive and sporty look. This includes a fresh bodykit with an angular front bumper bar and lower chin spoiler, and LED lights. 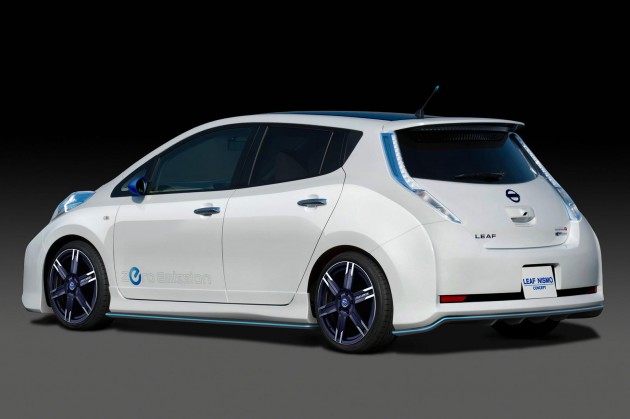 At the back, there’s a diffuser and aero-enhancing undertray which pulls air from beneath the LEAF to suck it to the ground, as well as a rear spoiler mounted atop the hatch to complete the look.

There’s also a pair of side skirts to give the body a fuller stance, and to compliment the new 18-inch alloy wheels. Hideaki Watanabe, corporate vice president of Nissan Motor Company, recently said,

“The Nismo Concept not only proves the hidden potential of Nissan LEAF but also adds even more excitement and energy to LEAF, delivering a guilt-free yet exhilarating driving experience that can be enjoyed by every car enthusiast.”

Nismo hasn’t mentioned if the Nismo Nissan LEAF Concept kit will become available on the market. Like the Nismo Nissan Juke Concept proved though, Nismo is looking to expand operations, and may put this kit onto the market some time in the future.