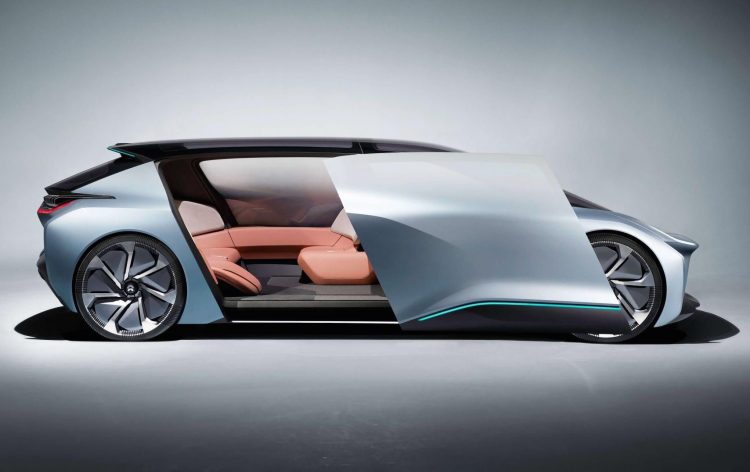 EVE is powered by an AI system called NOMI, which can monitor occupants and provide entertainment projected onto windows that double as smart glass displays.

From the outside, the body’s shape can best be described as a crossover-ish hatch, with a small frontal area which only consists of a leading edge, with the absence of a bonnet and front powertrain affording passengers a view through the firewall. Opaque windows give the side the appearance that there are none. Large, low-drag wheels are also visible. Inside things are quite different from the car of today. The simple peaches ‘n’ cream two-tone interior looks more like a home than a car, with comfortable surround seats, including some that face rearward and recline. A casual lounge environment capitalises on the fact the driver is no longer an essential part of the car’s operation.

If the urge to drive is there, a small squircle-shaped steering wheel motors outward and there are two small pedals on the floor that remind us driving is an afterthought in this primarily self-driving vessel. The company has an extremely ambitious target of bringing EVE to production by 2020 with a 965km (600mile) range, with the capability to achieve 321km after only ten minutes of charging. Right.

Other companies including Lucid and Faraday Future have also made bold claims which are met with media scepticism.