Images, which are apparently official renderings, of the new Subaru WRX concept car have been leaked online ahead of the concept’s official unveiling at the New York Auto Show in just a couple of days. 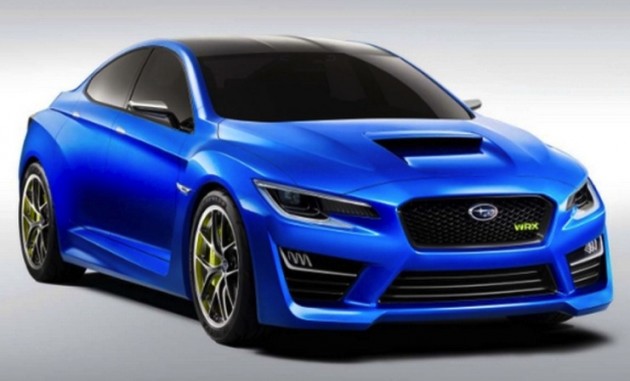 As we previously speculated, Subaru is planning to reveal a preview of the future WRX. Subaru said that it would show a “performance” concept, but didn’t say what it would be exactly.

Now that these images have surfaced we find out that the company is indeed planning to preview the next-gen Subaru WRX at the New York show.

Obviously this is just a concept vehicle at this stage, but much of the inspiration for the next-gen road car is likely to come from this. It showcases a very modern yet aggressive front end, with recessed black headlights, a full and thick chin spoiler, and of course that iconic WRX bonnet scoop.

At the back it features a chunky rear diffuser, quad-outlet exhausts, and a light spoiler which is moulded into the boot lid panel. Dark recessed taillights match those at the front.

As you can seen, Subaru might be planning to return to the more muscular and robust sedan design character as seen in the first generations of the WRX. The concept accentuates an anabolic attitude through the use of body moulded yet heavily bolstered wheel arches.

Subaru hasn’t released any specifics on the engine hardware at this stage. Judging purely by that bonnet scoop though, the concept at least might be powered by a turbocharged engine using a top-mounted intercooler, like all previous WRXs.

More details are expected to be revealed at the New York Auto Show which starts soon. Stay tuned.

UPDATE: The concept has been officially unveiled. Full report here.