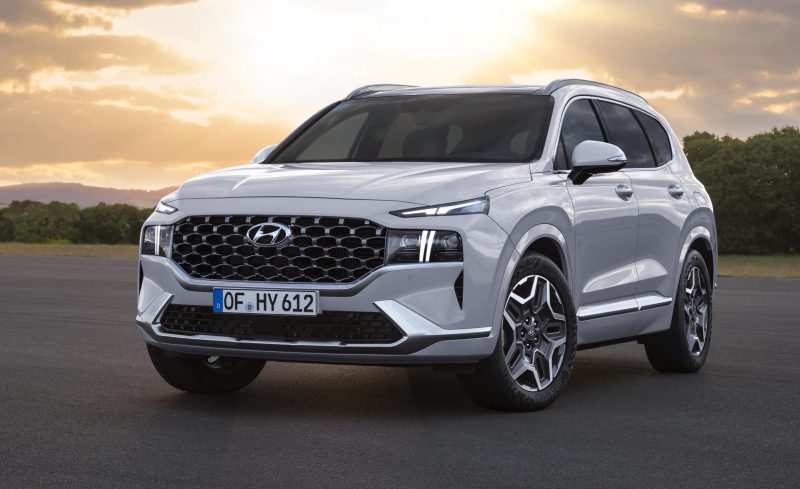 Check this out. It’s the new, 2021 Hyundai Santa Fe. And it, as you can see, showcases a fresh and noticeably more premium exterior design than ever before. Hyundai says it has developed the new model to offer a premium experience, while also ensuring it offers a high level of family-friendly practicality the nameplate is renowned for. Although it might look all new, the 2021 Santa Fe is more of a design facelift for the current fourth-generation model, with refreshed and updated technology.

At the front you’ll notice the giant new grille which extends almost the complete width of the SUV. This is supported by split headlights with a new T-shaped daytime running light layout that crosses down. The sides also showcase widened wheel arches, with new-look 20-inch alloy wheels introduced for some variants. Around at the back, Hyundai has introduced some redesigned taillights which connect in the middle via a slim illuminated bar. This helps emphasise width and a prominent stance. A revised rear skid plate section sits below, with a full-width reflector completing the look. Speaking about the design, SangYup Lee, senior vice president and head of Hyundai’s Global Design Centre, said;

“We modernised the new Santa Fe with premium features and appealing aesthetics that are sure to add value. The bold lines that extend from one side to the other and from front to back give Santa Fe a rugged yet refined look that SUV customers want. Besides, we’ve added numerous features and functions to create a truly family-focused SUV that is a pleasure to drive.” Some big revisions are also applied to the interior to keep it fresh and modern, although the current Santa Fe was only released a couple of years ago. On the dash is the company’s latest 10.25-inch touch-screen system, with a 12.3-inch digital instrument cluster for the driver, while a refreshed centre console offers more storage and presents a new button gear select system.

Hyundai is introducing a Terrain Mode selector system for the first time on the Santa Fe, which a dedicated control dial on the console for the driver. Various controls and buttons have also been revised for more ergonomic positioning, and the interior features an increased use of soft-touch materials to improve overall comfort and quality.

Hyundai Australia says the new model will go on sale locally during the second half of 2020. Local specs and trim level details will be confirmed closer to launch. Powertrain details are yet to be confirmed for Australia, however, overseas a new hybrid and plug-in are being introduced, as well as an updated 2.2 turbo-diesel.