As part of the 45th anniversary celebrations of the Mercedes-Benz SL-Class, the German company has revealed the new SLS AMG GT3 45th Anniversary special edition. 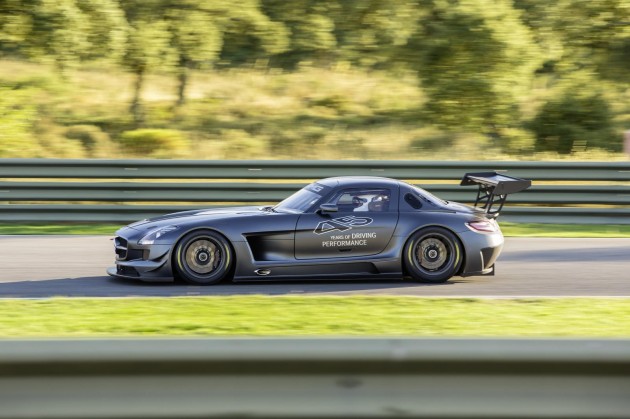 Featuring a mean matt black colour scheme, most of the SLS GT3 is made from lightweight carbon fibre. Panels in the exotic material include the doors, bonnet, boot lid, front and rear fascias and rear diffuser, the rear wing, and the guards.

Like the normal SLS AMG GT3 race car, the 45th Anniversary special is powered by a hand-built 6.3-litre naturally aspirated V8. It allows for 0-100km/h sprints in just 3.7 seconds, and a top speed of 300km/h.

Other highlights include a bespoke interior with a full steel roll cage, as well as a number of matt-style finishes around certain aspects of the trim.

Interested? As far as we know, the SLS AMG GT3 is only available in Europe at the moment, and just five of them are being made. Prices start at 446,250 euros (approximately AU$566,322).

It would be worth buying one of these bad boys simply to display in your man cave/garage, if you have the money of course.