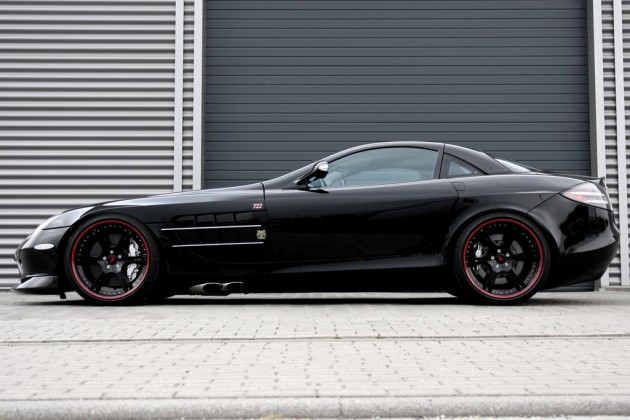 Not that the Mercedes-Benz SLR McLaren needs any more performance, Wheelsandmore have developed a new engine tune for the 5.4-litre supercharged V8.

Instead of producing a measly 460kW and 780Nm, Wheelsandmore have added a new supercharger unit and fettled with the ECU. The engine now pumps out 527kW and a massive 915Nm.

Wheelsandmore says the car will power off from 0-100km/h in just 3.5 seconds – actually 0.1 seconds slower than standard, but we presume the extra horsepower is simply overwhelming the rear treads. Top speed isn’t mentioned, but keep in mind the standard SLR McLaren is capable of around 339km/h.

Supporting the mammoth power on hand Wheelsandmore also supply a beefier wheel and tyre package, funnily enough. The pack consists of 20-inch forged wheels with Dunlop Sportmaxx tyres measuring 255/30 on the front and 305/25 on the rear. The wheels are then tucked nicely under the guards by a comprehensive racing coilover suspension kit, which is fully adjustable.

Other features include a few exterior cosmetic touches and a carbon fibre trimmed centre console inside to give the SLR that pure stealth finish. Not bad at all. If only we could provide some sound clips.