As part of AMG’s 45th anniversary celebrations, Mercedes-Benz has revealed the ‘AMG Performance 50’ growth strategy for the brand’s 50th anniversary. This will see the introduction of eight new models in the near future, and Performance Centre expansions. 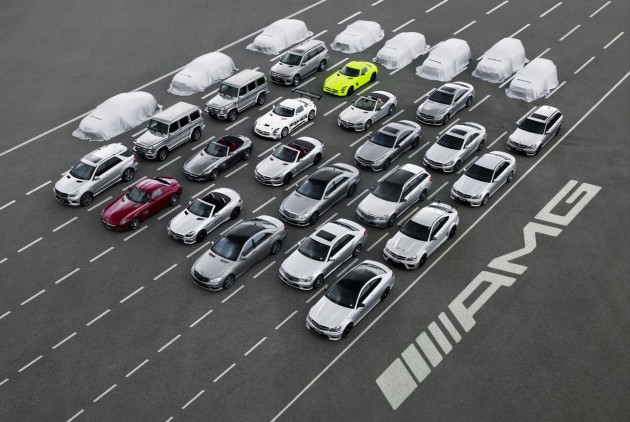 There are currently 22 high-performance AMG-specific models in the company’s lineup. These include ’63’ and ’65’ versions of the SL and G-Class, and all the C 63 AMG variants, as well as many others.

This lineup will grow over the next few of years, and by the looks of this teaser image, there will be a couple of jumped up SUVs, a few new sedans, and a couple of compact models.

One of those new models, as learned earlier this week, will be the Mercedes-Benz A 45 AMG hatch. This will be powered by a 2.0-litre turbocharged engine producing upwards of 400Nm, while overall power is expected to be around the 250kW mark.

The new hatch will also be equipped with an all-wheel drive system and dual-clutch seven-speed auto, making it the perfect rival to the Audi RS 3 (not available in Australia). It will also compete against the upcoming, rear-wheel drive BMW M135i.

Other AMG models set to join the force include performance versions of the upcoming S-Class, a new GL 63 AMG, a CL 63 and CL 65, and the SLS AMG GT. The two remaining of the eight are not yet known.

As for the dealership/Performance Centre expansions, AMG is planning not only to open up new outlets in Russia and China, spreading out to a total of 350 Performance Centres worldwide, it will also improve the overall AMG buying experience. This includes the option for buyers to take delivery of their AMG from the company headquarters, “where AMG customers can learn all about the spirit of Affalterbach in the AMG theme area”.