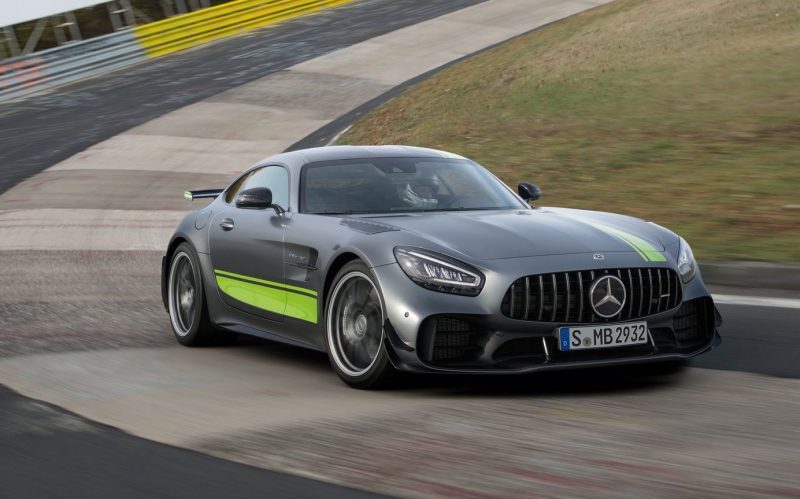 Looking to buy a loud and proud European sports car? The epic Mercedes-AMG GT R PRO is now on sale in Australia. It comes in as the wildest and most extreme expression of AMG in the current showroom. As you can probably tell, the GT R PRO is designed for track driving. And as such the suspension is completely adjustable so drivers can make changes according to different tracks. There’s a full AMG coilover package, offering adjustment for spring load length, compression and rebound, and there’s even an adjustable front torsion bar made from carbon fibre. Under the bonnet is a meaty 4.0-litre twin-turbo V8 that churns out 430kW at 6250rpm, and 700Nm between 2100rpm and 5500rpm. This is all sent through an AMG seven-speed dual-clutch automatic with rear-wheel drive. Mercedes says 0-100km/h comes up in just 3.6 seconds. Speaking about the racy model, Horst von Sanden, Mercedes-Benz Australia and Pacific CEO, said:

“Australians continue to show their affection for Mercedes-AMG, with an appreciation of the way each vehicle looks and performs and also of the brand’s motorsport heritage. We are very pleased to have secured a limited quantity of the AMG GT R PRO for our Australian customers who want to take the already impressive AMG GT R to the next level in performance.”

If you’re interested you better get in quick as just 15 examples are up for grabs in Australia. These are taken from the total global production output of 750 units. Prices start at $453,200 (excluding on-road costs), with the first deliveries scheduled to roll in during September.