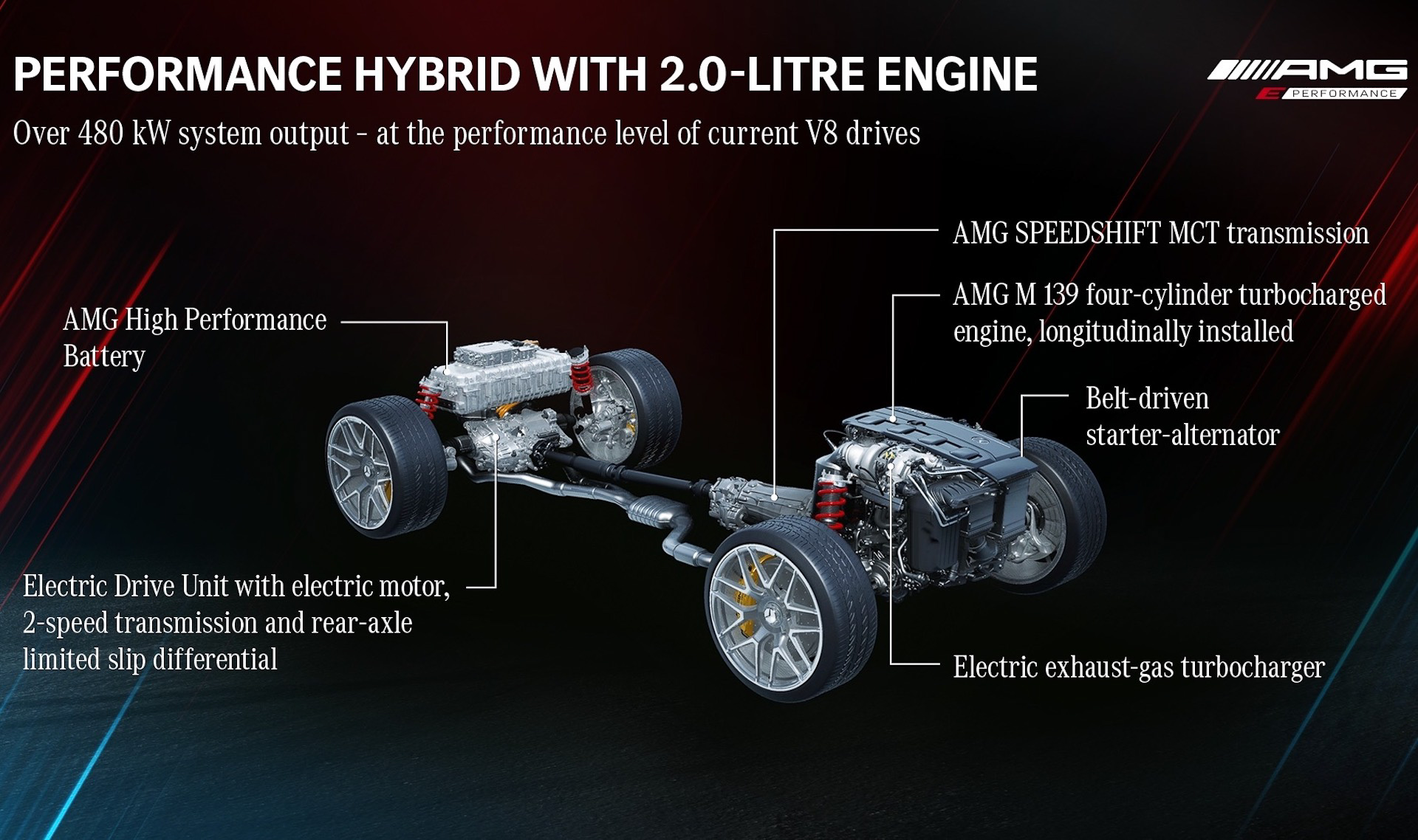 When Mercedes-Benz unveiled the all-new 2022 W206 2022 C-Class, some fans were disappointed to hear the lineup consists only of four-cylinder engines, including the next C 63 AMG version. Well, there is some redemption it seems as the hybrid in question is going to be extremely powerful. 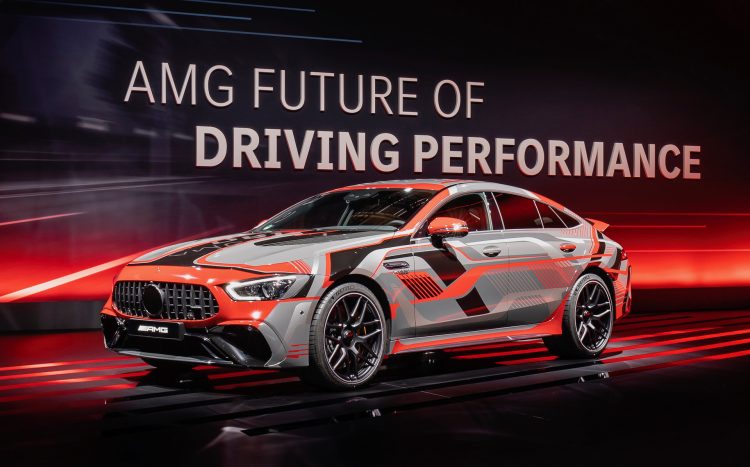 Mercedes-AMG outlined some of its latest technologies this week, including confirming plans to introduce completely electric AMG models in the future. The biggest news though is the formation of the E Performance sub-brand, which will be applied to many AMG models, including the next C 63 (name might change).

The company says it is developing two hybrid packages for future AMG models, including a V8 and four-cylinder. The V8 setup will include a rear axle-mounted electric motor that supplies 70kW of continuous power or up to 150kW/320Nm of peak output for 10 seconds. It receives energy from a 6.1kWh high performance 400V AMG battery. 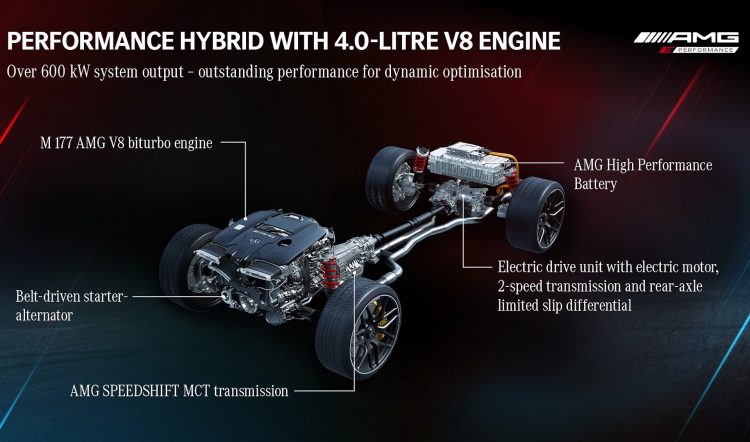 Since the electric motor runs directly on the rear axle and skips the nine-speed auto transmission, it can direct power instantly to the rear wheels via its own two-speed transmission. It also runs through an electronic locking differential, and, if the settings and conditions demand, it can divert power to the front axle for short periods during excessive wheel slip. This latter function comes thanks to a mechanical connection to the fully variable all-wheel drive system via a cardan shaft.

The setup has huge potential, and in fact Mercedes-AMG confirms a total system output of more than 600kW and 1000Nm. It also claims 0-100km/h times of less than 3.0 seconds. Details on the specific models in line for this setup are yet to be outlined, but vehicles like the E 63, CLS 63, and the company’s large SUVs seem likely. 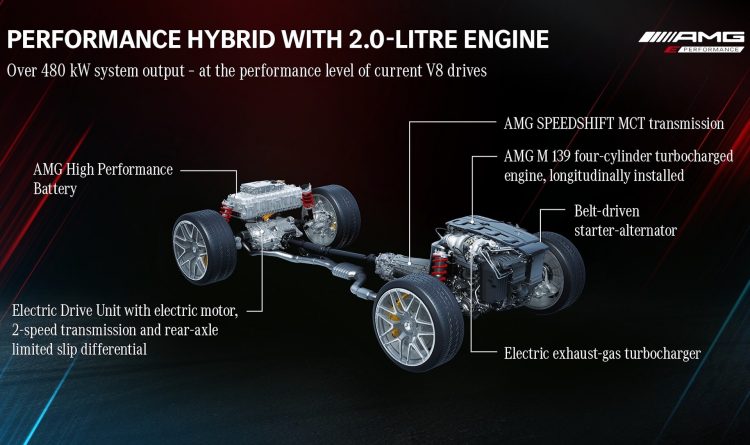 As for the four-cylinder hybrid package, which “will initially be launched in the future generation of the Mercedes-AMG C-Class”, the company confirms it is enlisting its potent 2.0-litre turbo M139 engine for the package (found in the A 45 S). However, Mercedes-AMG says it is further developing the engine so it “once again surpass the world’s highest litre output of all four-cylinder” production engines. That means more than 310kW and 500Nm. In fact, the company mentions “more than 330kW”.

Unlike in the A 45 S, this engine will be mounted longitudinally like a rear-wheel drive vehicle. As previously reported, it will also feature an innovative exhaust-gas turbocharger with integrated electric motor. Essentially, the turbine is assisted by an electric motor during spool-up, before the exhaust gas flow takes over to continue to spin the turbine shaft. This results in more immediate response.

But if it’s response you need, this engine is also going to be paired up to an electric motor that develops up to 150kW. A specific combined output of “over 480kW” is mentioned. Mercedes says: 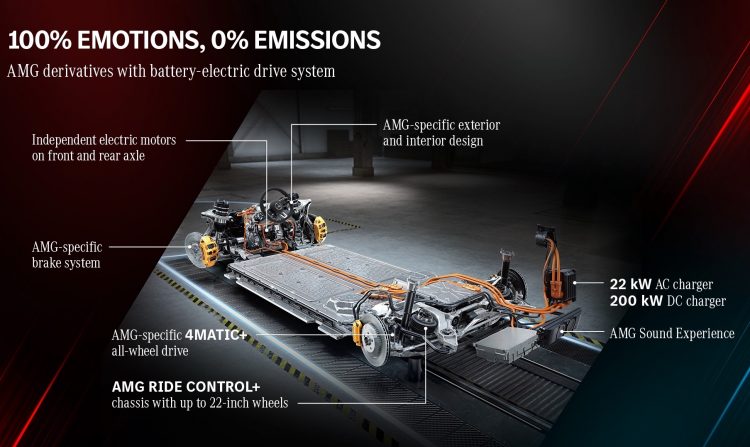 As for the fully electric setups, the German company says it is using the EQ architecture as a base, with AMG tuning and enhancements to supply maximum performance. The electric models will feature typical AMG tweaks as well, including for the chassis, brakes, and exterior and interior design. Mercedes says:

“They are ambassadors for a new era in the performance segment of the 43 and 53 series AMG models, for target groups who place high value on innovative electric mobility but do not want to forego sportiness and agile driving dynamics.” 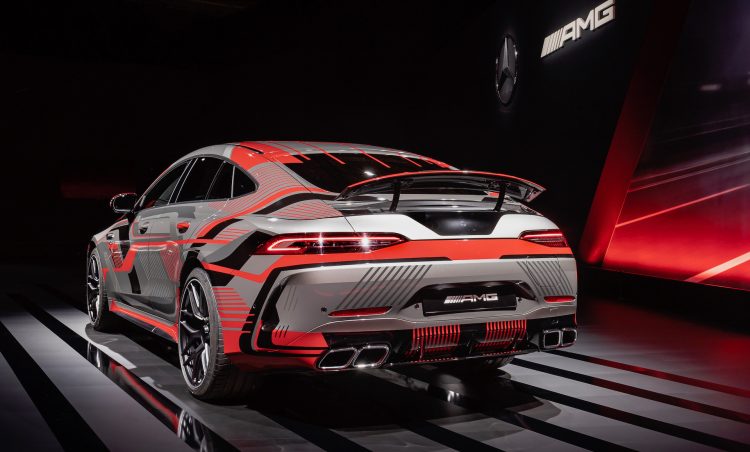 Output and complete electric motor details are yet to be confirmed, but the company says to expect a similar level of performance as the current 4.0-litre twin-turbo V8 models. And remember these will essentially replace the AMG 43 and AMG 53 series vehicles and not the V8 63 models. Mercedes says:

“From the combination of front and rear engine [electric motors], overall performance can be achieved on a par with the most powerful Mercedes-AMG Performance models with the current 4.0-litre V8 bi-turbo engine. This also applies to the sprint from standstill to 100 km/h, which is completed in well under 4.0 seconds, depending on the power and vehicle, and whose linear acceleration is a very special pleasure.”

Mercedes-AMG says it is also working on the next-generation of engine sounds. It says with new hardware, including loudspeakers, shaker, and sound generator, the technology promises an “authentic AMG sound experience”. More details on the electrified AMG models will be revealed later this year.