There has been spy shots circulating in the industry lately, showing prototype versions of a McLaren MP4-12C Spider during testing. It’s only a matter of time now before the vehicle hits production. 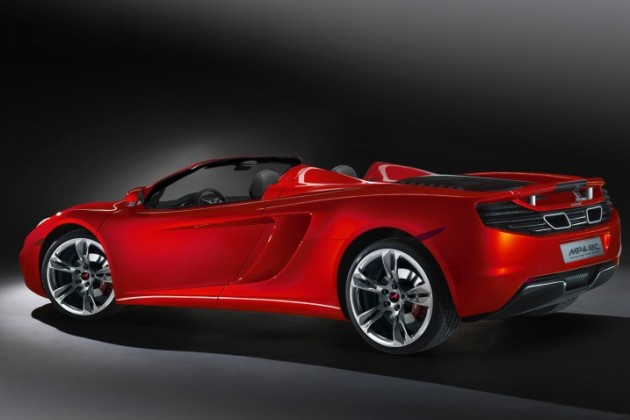 According to a recent Car and Driver report in the US, the drop top version of the company’s only supercar is set to be unveiled some time later this year. The new model will feature a carbon fibre roof and a slightly revised engine cover section. Whether it will be retractable or detachable design is still unclear.

At the 2010 Goodwood Festival of Speed in the UK, McLaren revealed the original MP4-12C coupe. This has had speculators… speculating. A potential debut date for the Spider could be at next month’s 2012 Goodwood Festival.

The 2012 Paris Motor Show in September, or the 2012 Los Angeles Auto Show in November are also likely candidates for the debut. We’ll keep you updated in any case.

The McLaren MP4-12C Spider is being designed to take on the Ferrari 458 Spider. It’s expected to feature the same 3.8-litre twin-turbo V8 engine as the coupe, producing 441kW of power and 601Nm of torque. Acceleration from 0-100km/h is likely to come up in around 3.5 seconds.

(Rendered image only. Courtesy of Inside Line)